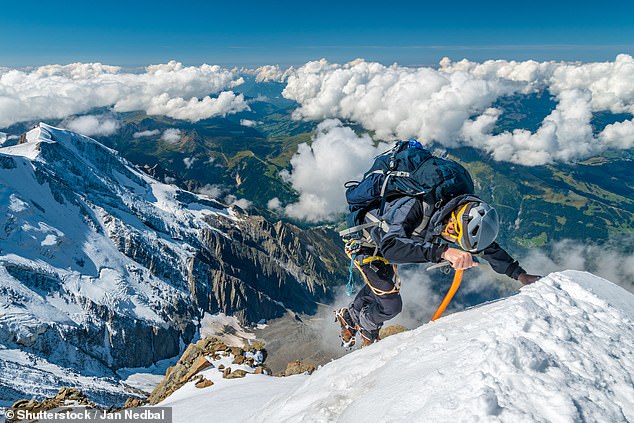 A British guy miraculously escaped death after enduring a night in a violent snowstorm on Mont Blanc with nothing but a tarp and a tracksuit for protection.

The unidentified 26-year-old from Portsmouth was discovered by the Aosta Valley Mountain Rescue on the Bionnassay glacier on Sunday morning, after calling for assistance the previous evening.

He became lost in stormy weather and became stranded at an elevation of 3,100 meters (10,170 feet) on the Italian side of the mountain range; however, rescuers were unable to locate him on Saturday night due to the challenging conditions.

When a rescue crew spotted him from a helicopter and reached it to his location the next day, they were astounded to discover he was still alive, wearing only hiking boots, a tracksuit, and a sheet.

By Sunday afternoon, the fearless hiker’s body temperature had risen to 33 degrees and he had recovered consciousness, recounting his extraordinary ordeal to physicians.

A member of Aosta Valley Mountain Rescue attends to the unconscious, near-death man whose body temperature was 25 degrees Celsius.

On the lower left side of this view of the Bionnassay glacier, an unprepared climber may be seen lying unconscious.

I departed Val Veny on Friday to ascend the Italian standard way to Mont Blanc, which passes through the Gonella refuge.

After spending the night in a tent on the neighboring Miage glacier on Friday, the man continued his journey on Saturday but became disoriented when a snowfall arose.

I got lost on the way to Gonella…

I was not very far away, yet it was difficult for me to reach it in the circumstance. I was forced to stop and take cover.

The man asked for assistance in the late hours of Saturday evening, but the weather was so terrible that the rescue squad was unable to locate him.

According to Rai News, Aosta Valley Mountain Rescue technicians stayed in intermittent touch with the stranded mountaineer until 2:30 a.m., at which time he was noted as sounding “exhausted but awake.”

The crew had to wait several more hours before a rescue mission could be initiated.

The rescuers were astounded to see that the man had attempted the massive ascent without suitable mountaineering attire, let alone ice axes, crampons, and other critical climbing equipment.

They believed he was a desperate immigrant who had chosen a mountain route to avoid border controls, and were shocked to discover that he was actually a grossly unprepared British hiker.

Doctors told Corriere that the man possessed a’strong character,’ but his near-fatal exploits in the absence of suitable equipment are hardly exceptional.

In August, a furious mayor on the French side of the Alpine range enacted a policy requiring so-called “pseudo-mountaineers” to pay a £13,000 deposit to cover their funeral and rescue costs before being permitted to climb.

A French mayor enacted a policy in August requiring novice climbers to pay a deposit of around £13,000 to cover rescue and funeral costs if they wish to climb.

The mayor of Courmayeur, which is located at the base of Mont Blanc on the Italian side of the border, referred to the decision as “absurd” and claimed that the Italian side “would not restrict hiker ascents.”

Mayor Jean-Marc Peillex of Saint-Gervais-les-Bains, from which climbers can reach the summit via the Goûter Route, enacted the action after dozens of individuals continued to disregard warnings.

The route is accessible to climbers of all ability levels, and the number of novice climbers is increasing, according to officials.

In a message posted on Twitter, Peillex explained that the idea for the deposit arose after five Romanian tourists tried the summit “wearing shorts, sneakers, and straw hats” and were forced to retreat by mountain police.

The mayor told The Telegraph, “Sometimes, stupid people only react to stupid ideas.”

They have the same mentality as someone attempting suicide. Therefore, I propose that we do things properly and demand that they cover the associated costs.

He continued, “People want to climb with death in their packs.”

Therefore, let’s anticipate the cost of having to rescue them and bury them, as it is inexcusable for French taxpayers to foot the bill.

However, the mayor of Courmayeur, which is located at the base of Mont Blanc on the Italian side of the border, described the decision as “absurd” and claimed that the Italian side “would not restrict the ascent of hikers.”

Roberto Rota stated, “The mountain is not property.”

‘As administrators, we are limited to indicating when the trails are in poor shape; but, requiring a deposit to ascend to the summit is absurd. If there is a real danger, you can decide to restrict a corridor or passage,’ the mayor told Corriere.

»British man rescued after climbing Mont Blanc in a tracksuit«