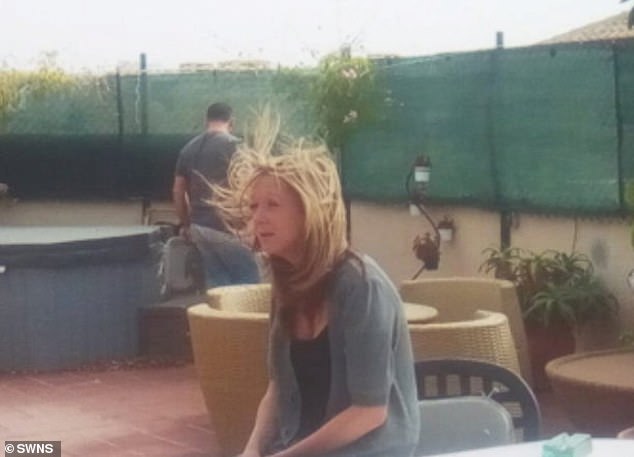 A British mother and her son are now homeless after Spanish officials auctioned their Marbella home for a fraction of its worth to pay off a debt owing by the mother’s ex-husband.

Victoria Jenkins has lived in the same Costa del Sol home worth £280,000 for the past 22 years, and her 13-year-old son Sam was born in the popular tourist destination.

But authorities in Mijas on the Costa del Sol presented her with an eviction notice without her knowing after selling their home at a reduced price of £24,000 in a’secret’ auction.

Moreover, she is not the only alleged victim of a property seizure controversy, as a number of other homeowners claim to have been targeted in similar situations.

Campaigners have demanded that police investigate town leaders and a previous mayor in response to the scandal.

Victoria Jenkins and her son Sam are homeless as a result of the hidden sale of their Marbella house by Spanish officials.

Ms. Jenkins and her ex-partner purchased the two-bedroom apartment in Riviera del Sol for approximately £230,000 without a mortgage or other lien.

However, the local authorities, comparable to a town council in the United Kingdom, sold the property for only $24,000, despite it being worth approximately $280,000, due to an alleged debt of £3,500.

After paying the debt, officials withheld the remainder of the sale money, alleging it was used to pay legal fees, leaving Ms. Jenkins and her child with nothing, not even the child support she had been awarded by the court.

Six men, including two police officers, two town hall officials, the new owner, and his friend, arrived to the apartment to evict the tenants, according to Ms. Jenkins.

Since October 5 of last year, when she and her son, Sam Cohen, were detained in Andalusia, she has been compelled to sleep on a friend’s sofa while suing the Andalusian courts for answers.

She received her first eviction notice in November 2020 and was informed that her apartment had been auctioned by the town hall to reclaim outstanding ground taxes of £3,500 owing by her ex-partner Lee Cohen, who was the legal owner of the property.

She said that no one informed her of the debt or the sale of the two-bedroom apartment, which occurred in 2015 behind closed doors.

Her 13-year-old son Sam was born in the popular tourist destination, where she has resided in the same £280,000 home for 22 years.

The first time Ms. Jenkins learned of the sale was when she received a formal eviction notice forcing her to vacate the home by April 15, 2021.

The mother and son were left without a home and were forced to rely on a friend’s sofa for shelter.

After a lengthy legal battle, the court ultimately granted her access to her case file, where she discovered that eviction notices and papers regarding the sale were delivered to the incorrect location.

Ms. Jenkins asserts that this was done intentionally and is part of a wide-ranging scheme by town hall officials to swindle vulnerable homeowners out of their houses by selling them at a discount.

She stated, “Because the sale notification was delivered to the incorrect address, I was unable to communicate.”

I have had the same address, email address, and phone number for the duration of my stay in Spain. The addresses on all court records are valid, however the notifications were delivered to a nonexistent address.

“Because it appeared that I was not replying, the judge instantly ruled in their favor without my knowledge, a fair hearing, or an opportunity to present my side and legal documentation.”

“When it appeared to the judge that I was unresponsive, he gave them the eviction, and they had no trouble locating me and beating on my door when it was time to evict me. I have no idea how these individuals can sleep at night.

Ms. Jenkins and her ex-partner purchased the two-bedroom apartment in Riviera del Sol for approximately £230,000.

I have never heard of a court system anywhere in the world that believes it is fair to only hear one side and not provide an opportunity for the other side to be heard.

“The method had been twisted to prevent me from speaking or informing anyone else about what had occurred.”

I never had the opportunity to present my position. I believed that courts were required to hear both viewpoints. We are in a situation of extreme vulnerability.

How do individuals obtain an invitation to a private auction? Why is no one able to answer this issue to begin with? I would want to purchase a $280,000 home for $3,500.

“When my property was put up for auction, there were other residences with far bigger debts than $3,500.” These properties with greater indebtedness were not sold at auction. Why is this so?

My home had a completely paid-off mortgage, whereas the others did not, thus there was a significant disparity between equity and what was to be gained.

“Our property was sold out from under us without compensation, despite the fact that it was worth hundreds of thousands of euros in equity.”

How could this be occurring? It seems so unjust. Where is my son? His entire life has been spent in this location, and he attends school here.’

The home she resided in was totally paid off, with no outstanding mortgage, 22 years after she and her then-partner purchased it together.

Since he left her and their little son Sam in Spain in 2012 to begin a new life in Indonesia, she has not heard from Mr. Cohen.

Ms. Jenkins had previously secured permission from the Spanish courts to remain in the residence until their child turned 18.

Angel Nozal, the former mayor of Mijas, forcibly sold the property, leading her to assume that local politicians took advantage of her position to get the apartment.

With no social housing available, the authorities’ only offer of assistance was to place Sam in foster care.

The Spanish authorities instructed the desperate mother to seek for emergency financial aid, but a year later she has not gotten a dime.

The mother and son were left without a home and were forced to rely on a friend’s sofa for shelter.

Ms. Jenkins stated, “There is no social housing in this area.” I sought assistance from social services, who informed me that if I did not have a home, my kid would be placed in the care system.

“We are currently staying on a friend’s sofa as I try to save up for a down payment on a new property.”

“I feel helpless, victimized, unable to protect my son, frightened, and terrified.” Never before have I felt so harassed and powerless. I do not comprehend why my child’s legal rights were disregarded.

Ms. Jenkins is now challenging the legitimacy of the transaction before a tribunal at the Supreme Court in Madrid, but it could be years before the case is heard.

She continued, “We were evicted in the midst of a global pandemic and left with nothing but a $3,500 bill.”

I’ve tried to give my son the greatest upbringing possible, but I can’t spend enough time with him due to the stress of the situation. It is very terrible.

“My son has only one childhood,” I have no idea how we will manage now.

“This is a terrible way for the system to handle and abandon a child without a father. It is astonishing. I believe those who were entrusted to protect my child have instead stolen from him.’

In 2015, a Fuengirola court granted Ms. Jenkins sole custody of her son, as well as the ability to remain in their home until her son turns 18 or until alternative housing is arranged.

Ms. Jenkins, who was born in Chelmsford, Essex, but is now a citizen of Spain, stated: ‘In November 2020, there was a knock on my door and I was served with an eviction notice.

‘I have inquired as to why I was not advised of this or given the opportunity to pay his debt, or even the chance to be heard by the judge, but because the home was not in my name and I only had the right to reside there, they stated that they were not legally required to notify me of the sale. The first notice of eviction I received was a final one.

I don’t see how they can take our house and all the proceeds from the sale, leaving me and my child with nothing.

“Because I was never the owner, I have never been able to protest or engage in legal actions about the sale of the house. I attempted but failed at the first obstacle.

“There was a great deal of money in the apartment, and we were in a precarious position, so they [the town hall] took advantage of us. But I never imagined they would subject us to this.

Why was the money for a debt of £3,500 taken? My son was also owed years of child support. Why wasn’t this taken into consideration? How can they claim their money while ignoring my son?

“In the United Kingdom, the authorities help you find alternate housing, but here there is nothing, no assistance whatsoever, and we’re living on the streets.”

Ms. Jenkins cautioned other Britons against investing in the region, as other expats had encountered similar legal issues.

She stated, “There are numerous television shows depicting people buying homes in the sun, especially in this area, but no one sees what happens to them afterward. I believe there should be a strong warning to anyone considering investing money in the Mijas Costa area until the authorities are investigated.”

It is a popular destination for tourists and those seeking a fresh start. I have witnessed countless individuals who have sold their homes in the United Kingdom in order to invest in the United States, only to depart a year later with nothing. It is quite heartbreaking.

In the same year, the Andalusian regional parliament initiated an investigation into the Mijas town hall’s method of auctioning off homes seized for tax arrears between 2010 and 2015. This investigation is continuing.

In certain instances, it was reported that residences were seized for minor payments and then sold at steep discounts. Locals have termed it the “Official Scam” since authorities are reportedly involved.

The previous mayor, the former head of the city’s treasury, and a tax collector at the city hall may face criminal investigations as a result of these incidents.

When questioned why these auctions were being held despite the investigation into the former mayor, a spokeswoman for Mijas Town Hall stated that she believed the last sales took place between 2012 and 2016, but was unable to provide an exact date.

She asserted that the auctions were not being conducted in secret and were in accordance with the law.

The spokesperson noted that information on the auctions is publicized and accessible to the public, but she was unable to specify where or how this information may be obtained.

She stated that she would have to check into these issues, but no one from the town hall has responded to many demands for clarity as to why the transactions were conducted without contacting the property owners or providing them the option to settle the bill themselves.

The regional government of Andalusia and the local police were asked for comment.