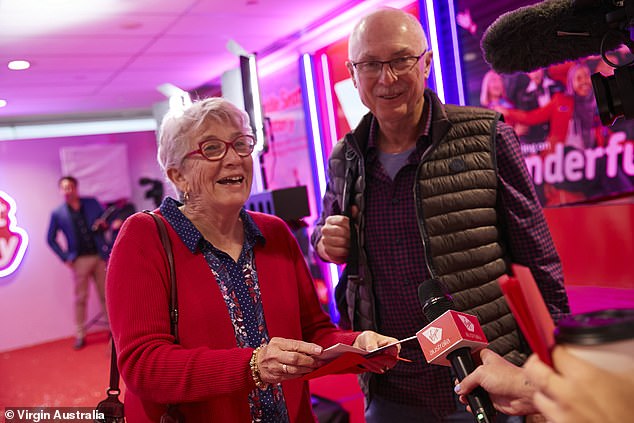 Virgin Australia surprised passengers on a flight by offering free cruise tickets to anyone seated in the middle seat, which was deemed the worst seat on the plane.

It’s part of the airline’s new ‘Bring on Wonderful’ campaign, which rewards middle-seat passengers every week with hundreds of prizes worth $230,000.

Middle-seat passengers on flights will be placed into a weekly lottery with rewards including first-class tickets to exotic destinations, cruises, helicopter flights, and tickets to the AFL Grand Final.

A video captured the moment a representative announced to passengers on a Melbourne-to-Adelaide flight that everyone in the middle seat had won a $6,000 Virgin Voyages holiday.

With $230,000 worth of prizes on offer, Virgin Australia has started a new promotion dubbed “Bring on Wonderful” to reward passengers who sit in the middle seat.

“Every single middle seat holder on this flight is now the proud winner of a $6,000 Virgin Voyages cruise,” she shouts into a microphone.

Passengers and flight attendants explode in applause and joy, with some brandishing confetti sticks.

The spokesman said, “Now I’m going to repeat that again because we may have lost a few folks.”

Everyone seated in the middle seat now has a Virgin Voyages voucher for $6000.

We will begin cruising from Australia at the conclusion of 2023.

She then praised the passengers before presenting the winners with their cruise tickets.

“And for everyone else on board, we don’t want you to feel left out, so we’ve deposited 10,000 Velocity points as a small bonus for being on this flight,” she continued.

Middle-seat passengers on a Melbourne-to-Adelaide flight were informed by an airline representative (pictured) that they had won a $6,000 Virgin Voyages cruise.

Middle-seat customers on Virgin flights will be entered into a weekly drawing for premium flights, cruises, helicopter trips, and AFL grand final tickets as part of the Bring on Wonderful promotion.

Virgin Voyages will launch in Australia beginning next summer for a short time only, concluding in March 2024.

The Resilient Lady, the company’s flagship vessel, will be stationed in Melbourne and transport guests to places across Australia.

The duration of cruises ranges from two to fourteen nights.

The Bring on Wonderful campaign is meant to encourage travellers to choose the middle seat by offering $230,000 worth of rewards.

A recent survey conducted by the airline revealed that no passengers selected the middle seat as their preferred seat on a flight, while 62% chose an aisle seat, 35% a window seat, and 3% said they didn’t care.

To be eligible for the weekly draw, participants must be 18 years or older, Velocity Frequent Flyer members, have their trip details recorded on the Virgin app within 48 hours of their flight’s departure, and, most crucially, be placed in the middle seat.

The campaign for Virgin Australia concludes on April 23, 2023.