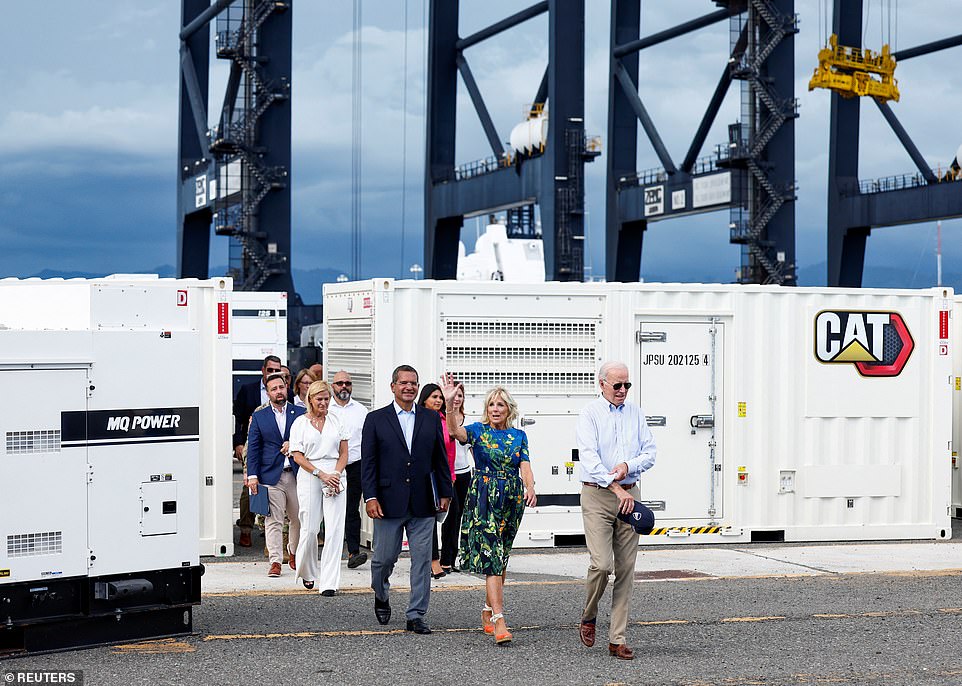 As Puerto Rico continues to recover from Hurricane Fiona’s destruction, President Joe Biden reassured the island’s citizens on Monday that “all of America is behind you.”

“We physically came here to demonstrate our support for you. During a trip to Ponce, Puerto Rico, with first lady Jill Biden and FEMA administrator Deanne Criswell, he declared, “All of America is with you as you accept, recover, and rebuild.”

Tens of thousands of residents are still without electricity on the island after Fiona hit it on September 18, and Biden promised to provide swift help.

We collaborate to reconstruct Puerto Rico completely, and I mean completely. And rebuild it with resilience so you can be sure that when the storms come again, which they will, the damage they do won’t be as bad,’ he added.

In response to Governor Pedro Pierluisi’s request to prolong the major disaster proclamation for 180 days, he said he was “certain” he could do so.

90% of the 3.2 million residents of the U.S. territory, of whom 44% are poor, now have access to electricity. But it still leaves around 137,000 without electricity.

When the Bidens visited a volunteer center at a nearby school, Jill Biden assisted volunteers in loading up bags of supplies.

Food items and home supplies, such as 10 pound bundles of yellow onions, cuties, garlic, boxed juice, rice, almonds, ground maize, chickpeas, and cases of bottled water, were arranged on long tables draped with red and blue tablecloths in the center.

The Bidens’ motorcade passed several protestors as it traveled through Ponce on the way to that visit. One placard said, “Biden Go Home.”

However, the president noted that his native state of Delaware has a large population of minorities, including Puerto Ricans, and told the audience in his speech that he felt a connection with the territory. Wilmington, Delaware, and Philadelphia, a neighboring city, both have sizable Puerto Rican populations.

Biden referred to his home state of Delaware as being a “small state.” However, Delaware has a sizable Puerto Rican community compared to its overall population, in extremely relative terms.

I feel like I was politically raised in the Puerto Rican community at home. So, for a very long period, we came here for both business and pleasure,” he remarked of his family.

Biden was aware of the possibility of further inclement weather when he spoke.

He made a jest, saying, “I don’t want the headline to read, “Biden delivers a storm to Puerto Rico.” I may have to make this a bit shorter, I said.

Throughout his words, ominous clouds began to creep above. In the distance, there was thunder, and lightning erupted in the sky.

Biden revealed $60 million in assistance for the island territory during his visit.

The funds will assist Puerto Rico shore up levees, build flood barriers, and develop a new flood warning system so the island will be better prepared for next hurricanes.

They were provided under last year’s bipartisan infrastructure package.

He remarked, “We have to make sure Puerto Rico is ready when the next disaster comes.”

When Fiona reached Puerto Rico on September 18, it released more than 100 landslides, destroyed more than 100 bridges, and caused devastating floods. At least two individuals perished in floods, while several more perished in mishaps involving the use of candles or generators as the island-wide power outage persisted.

Government authorities have assessed losses at around $3 billion, but they have issued a warning that costs may increase dramatically when more assessments are made.

While stating that more catastrophic weather may be on the horizon, Biden attributed the storm’s power to climate change.

We are aware that the climate catastrophe and more severe weather will continue to affect our island and the United States as a whole. And when we rebuild, we must make sure to construct it durablely,’ he added.

Scientists from Stony University in New York discovered that today’s storms were receiving up to 10% extra rain as a result of climate change.

He stated, “Puerto Ricans are resilient and determined, and yet they keep rising.”

Five years after the island was ravaged by the stronger Hurricane Maria in 2017, he had promised that the United States government would not desert Puerto Rico again as it began to recover.

Over the island’s budget demands and financial management, the former president Donald Trump and the island had a protracted dispute. In 2018, Trump claimed that the hurricanes Irma and Maria’s death tolls had been exaggerated “to make myself appear as awful as possible.”

After Hurricane Maria devastated the island in 2017, Trump paid a visit to San Juan. Paper towel rolls were notoriously thrown into the throng by him during his arrival.

The Bidens’ visit was far less significant. The first pair visited with relatives who had been impacted by the disaster and were briefed on storm damage.

On Monday morning, as he was leaving the White House, President Biden said that one reason he was in Puerto Rico was because the island hadn’t “been taken very good care of” and its residents were “working like hell to catch up after the previous catastrophe.”

He remarked during his statements in Puerto Rico that “Puerto Ricans are tough people, but even so, you have had to suffer so much and more than need be and you haven’t received the relief in a timely manner.”

The president and first lady go to Florida on Wednesday as authorities continue to assess the devastating effects of Hurricane Ian, whose death toll has risen to 87.