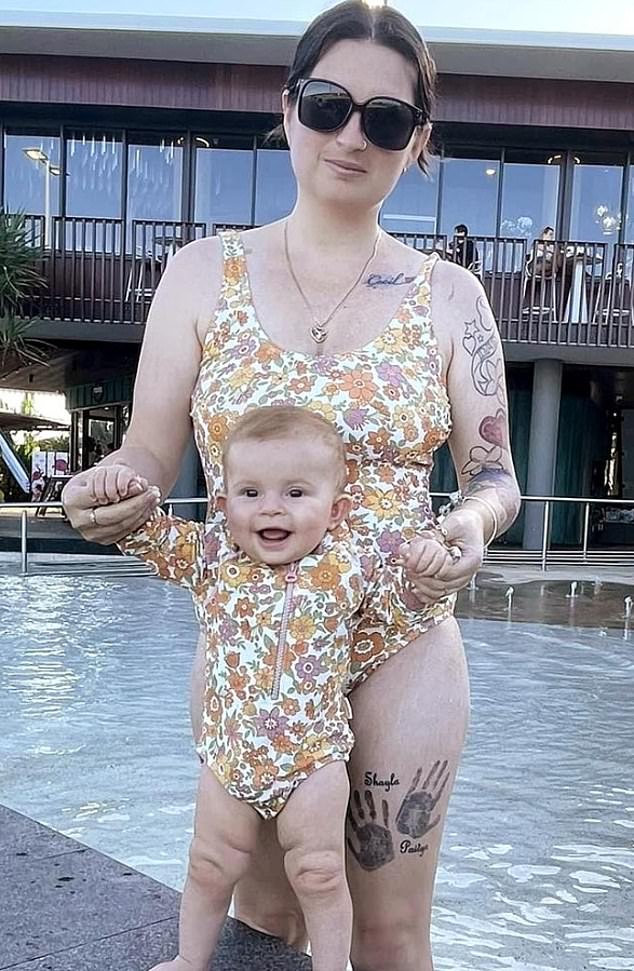 A mother whose little daughter drowned in the family spa is contending that she was dismissed from her airport job because she “breached security” by leaving the terminal as soon as she received the news that her child had died.

When Tahlia Brown learned that her 17-month-old had been discovered unconscious in the family spa on September 19, she had just begun her shift with catering firm Cater Care at Rockhampton Airport.

Taidyn “Totty” Murphy sadly perished after entering the spa bath at her Gracemere, Queensland, home in the Rockhampton district.

When Ms. Brown’s 12-year-old daughter found Totty and contacted her mother, her boyfriend Cecil Murphy, brother, and two other kids were present at home.

Ms. Brown is struggling to keep her job after losing her kid and learning that she had “breached security” by talking on the phone while rushing through the airport.

The morning was a haze, Ms. Brown told the Courier Mail, but she recalled rushing through security while on the phone, pleading with anybody to give her a ride home since Totty’s father had dropped her off at work that morning.

My baby daughter was dying, so I was sobbing and pleading with them to take me home,’ Ms. Brown said.

Before taking Totty to Gracemere Police Station, where police also tried CPR, the family gave her CPR in an effort to resuscitate her.

She was subsequently transported in an induced coma by air to Queensland Children’s Hospital in Brisbane.

The next day, Totty passed away in her mother’s arms at the hospital.

Before things went south, according to Ms. Brown, her employer texted her to say, “My heart goes out to you.”

On September 23, October 5, and October 7, Ms. Brown alleges she contacted her employer three times in an effort to set up hours so she could make some money and get her mind off “the grief.”

Ms. Brown was informed that Cater Care would ‘had to get back’ to her in response.

Less than a month after losing her baby, Ms. Brown was informed that her job “wasn’t looking good” on October 13.

She was then instructed to begin seeking for employment elsewhere even though she still formally had a position with Cater Care.

The business provided a reference for her but said that since she passed through security holding her phone, it constituted a security violation.

“What did they anticipate I would do?” I found my kid dead,” Ms. Brown said.

I did what any mother would have done. I’m horrified and saddened by it.

To go to her and be with her, “I would have raced over burning coals and done anything.”

Cater Care made a “commercial choice,” according to a representative for Rockhampton Regional Council, which owns the airport facility, and they were not involved.

He expressed his sincere sorrow and compassion to the family for their tragic loss on behalf of Rockhampton Regional Council.

I can attest that no hiring decision about a private company’s workforce was made with Council or the Airport in mind; the choice was made by the company itself.

I wish to express our deep sadness to the family once again for their loss.

The management of the Courier Mail was informed about the situation, according to a Cater Care representative, and they are “helping her through this difficult period.”

The spokesperson said, “We have an internal procedure that we are committed to adhering to to guarantee a fair and reasonable investigation and assessment of this circumstance.”

The ASIC (Aviation Security) security requirements are binding on Cater Care, and this is being taken into account as part of our approach.

Totty was cremated, and Ms. Brown claimed her other children “aren’t dealing” so her ashes were put into teddy bears for them.

The bears are referred to as “Totty Teddies,” she claimed.

»Airport fires mum who rushed to attend to her drowning child«