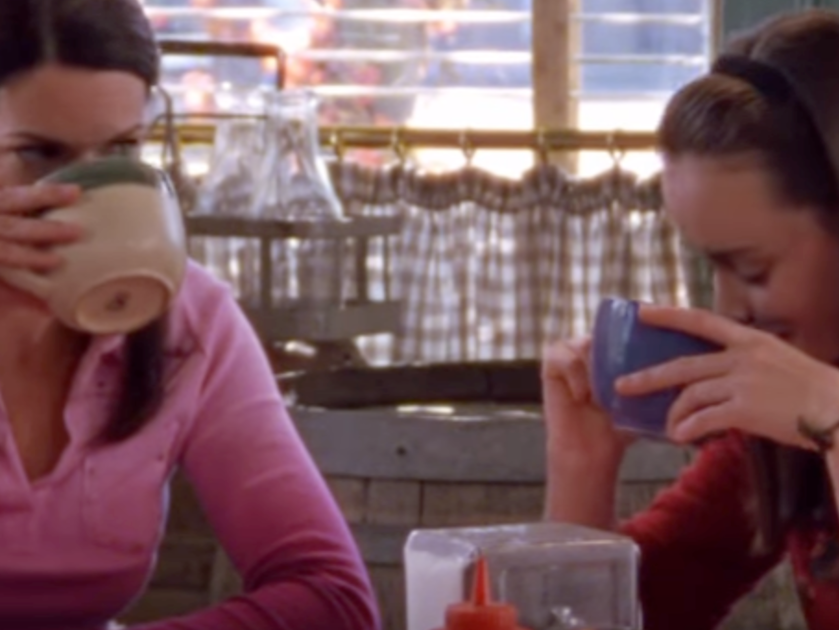 The law-abiding Rory broke the law at age 15 when she drove alone.

At a stop sign, Rory’s vehicle is struck by a deer in the episode.

On the fourth episode of the first season, titled “The Deer Hunters,” Rory (Alexis Bledel) drives herself to school after oversleeping the morning before a test, and a deer collides with her vehicle on the way to Chilton.

Rory doesn’t turn 16 until a few episodes later, “Rory’s Birthday Parties”; at the time, she appeared to be just 15 years old and was driving a car by herself.

In Connecticut, where the fictional town of Stars Hollow is based, the minimum age for obtaining a learner’s permit or driver’s license is 16. Even if she were 16, she would still require a licensed driver in the vehicle, a law that rule-abiding Rory would undoubtedly observe, even if she were running late for a test.

A few supporting performers portrayed many roles on the show.

Sean Gunn appeared as Mick before the character of Kirk was created.

First-time viewers of “Gilmore Girls” may experience double vision due to the fact that some supporting actors played multiple roles throughout the series.

From one episode to the next, Babette’s cat’s gender shifted.

Babette stood in front of the dead body of her cat.

In the third episode of season one, titled “Kill Me Now,” Babette (Sally Struthers) referred to Cinnamon, her loving “260-year-old cat,” as a “he.” Two episodes later, in “Cinnamon’s Wake,” Babette refers to the now-deceased cat as “she.”

Babette, one of the more absent-minded neighbors in Lorelai and Rory’s small town of Stars Hollow, almost appears to fit the minor inaccuracy.

Mr. Kim is an enigma.

Mr. Kim suddenly emerges in “A Year in the Life of Gilmore Girls.”

The character was a complete enigma until the “Spring” episode of the 2016 revival aired. During the Stars Hollow International Spring Food Festival, Mr. Kim appeared on-screen for a few brief seconds.

The cameo was likely introduced as an inside joke for diehard “Gilmore Girls” fans, but virtually no questions were answered concerning the guy, other than the fact that he exists.

Rory seemed to give Dean cookies containing walnuts in one episode after learning he was “mortally” allergic to walnuts.

According to Lane, Dean is “mortally allergic” to walnuts.

In the seventh episode of the first season, entitled “Kiss and Tell,” Lane shared with Rory what she had discovered about her buddy’s new obsession, Dean (Jared Padalecki), from Dean’s best friend.

Dean “is mortally allergic to walnuts” is one of the things she discovers.

In the following episode, “Love and War and Snow,” Rory requests a batch of Sookie’s rocky-road cookies, which are customarily prepared with a variety of nuts, including walnuts.

Later, Rory presents Dean these cookies, and he seems extremely thrilled about the fact that they are rocky road, which seems odd if he is indeed allergic to nuts.

Due to the fact that Dean doesn’t end up in the emergency room, it’s safe to believe that either the “Gilmore Girls” writers forgot their line about his allergies, the cookies were cooked in an unorthodox manner without walnuts, or Dean never ate the cookies Rory offered him.

It appears that Rory’s great-grandmother has returned from the grave.

Lorelei the First is alive at the conclusion of the first season.

During the same episode, Richard additionally stated: “The First Lorelai was my mother. She was a highly accomplished equestrian, a distinguished patron of the arts, and her masquerade balls were renowned worldwide. My mum was truly an impressive woman.”

Throughout his diatribe, he uses the past tense to allude to her as if she were deceased.

In “The Third Lorelai,” however, Rory’s great-grandmother is alive, well, and terrifying Emily 15 episodes later.

Lorelei the First, portrayed by Marion Ross, made numerous additional appearances before her apparent second death in “The Reigning Lorelai,” episode 16 of season four.

There is some uncertainty on when Jess’s father left.

However, episode 20 of the third season “Luke approaches Jimmy, Jess’s father, and says, “The last time I saw you was just after Liz gave birth to your daughter. You were going to purchase diapers and return to the flat with us. Recall that? You departed, but never returned.”

This appeared to contradict Luke’s earlier assertion, hinting that Jess’s father had left when his son was a newborn, not a teenager.

A boom microphone pops out of nowhere as Rory attempts to persuade Lorelei to skip Friday dinner.

A boom microphone falls for an instant.

Friday dinners with Emily and Richard are sometimes a requirement for Rory and Lorelei.

In the sixteenth episode of the first season, Rory seeks to escape dinner in order to spend her anniversary with Dean, who has a huge night planned. Lorelai sneers, knowing that it will be difficult to avoid supper with her parents.

As Lorelai attempts to get the phone, a boom microphone briefly falls.

The cups alternate between red and blue and back to red.

While dining at Luke’s in the third episode of season two, “Red Light on the Wedding Night,” Lorelai and Rory’s coffee cups appear to transform from red to blue to red in a matter of seconds.

Considering their current financial circumstances, Lorelei and Rory’s lifestyle does not appear feasible.

Not only is takeout expensive, but so is a large house in Connecticut.

Despite Lorelai’s repeated assertions that she and Rory are quite impoverished, their lifestyle appears to contradict her claims.

On the show, the pair rarely, if ever, reuses apparel. In practically every episode, they also buy takeout from pizza shops and Chinese restaurants, which adds up.

In addition, the property listing website Trulia calculated that Lorelei and Rory’s Connecticut home was worth approximately $445,000. In addition, she refurbished and repaired the residence multiple times throughout the series.

Despite the fact that her parents, Emily and Richard Gilmore, are wealthy, Lorelei is proud that she does not take financial assistance from them, except when it comes to Rory’s education. Therefore, it is unclear how Rory and Lorelei are able to afford their lifestyle.

Concerning the boat in Luke’s rented garage, there is a lack of continuity.

The boat does not appear in season four.

Luke was instructed to remove his father’s yacht from the garage he had been renting during season five. This story discloses that the boat was allegedly stored in the garage for more than a decade.

In contrast, when Luke had visited the same garage in season four, episode 12, “A Family Matter” — around a year earlier — there was no boat in sight.

On the resurrection, the citizens of Stars Hollow debated about removing their septic system, despite having done so years prior.

The debate was also covered on the original series years prior.

During an episode of “Gilmore Girls: A Year in the Life,” the citizens of Stars Hollow engaged in a heated dispute over whether or not the town should remain on the septic system.

However, in the first season, when Rory is telling Dean about the town’s tendency to go overboard with festivities, she mentions that when they went off the septic system, they staged a month-long celebration.