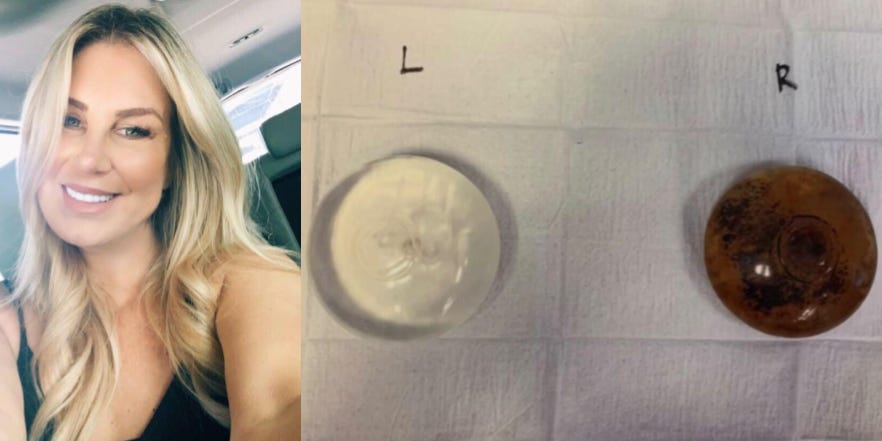 A woman from Texas said that she was astonished to learn that for at least ten years, her breast implants had been the source of serious health problems.

The late MLB baseball player Jose Lima’s ex-wife, Melissa Lima, 49, said that eight years after getting breast implants, she started experiencing a number of serious symptoms that affected her everyday life. She would learn that the implants were formed in 2020.

Lima is one of a rising number of women who have discussed the comfort they felt after experiencing health issues as a result of obtaining breast implants. She originally discussed her condition in a popular TikTok video that has received over 5 million views in an effort to encourage women to act “sooner rather than later” about any issues they could be experiencing after the placement of implants.

She explained to Insider that the more harm you essentially inflict to your body the longer you wait.

In 2002, when a record number of women were getting breast augmentations, Lima had breast implants put in.

“Back then, getting implants, huge boobs, a small waist, and low hips was quite fashionable if you were a celebrity or the wife of a baseball star. I thus thought, “Okay, let’s do that,” “She said.

According to Lima, she began experiencing symptoms of her physical and mental health in 2010, including blurred vision, hair loss, exhaustion, anxiety, joint pain, inflammation, acne, weight gain, and rashes.

Numerous of the symptoms Lima listed, such as panic attacks, brain fog, eyesight issues, sleeplessness, and other issues, have been reported by thousands of women.

As a result, Lima told Insider, “I’d never related it with my breast implants. I simply assumed I was maturing and growing older, and maybe my hormones are changing because I’m going through menopause.”

As a single mother, Lima said that she also struggled with depression and anxiety, which had a significant influence on her day-to-day activities and interactions with her kids. She would disregard the needs of her two boys.

“I was quite worn out, anxious, and confused. I would either forget to pack my kid’s lunch or couldn’t get out of bed to do so “Referring to her youngest son, who was in first grade at the time, Lima added. “Everything gets packed into one, and then it simply spirals out of control until you are unable to function, it interferes with your everyday life, and you stop caring if you are happy or not, whether you are there for your children, and other such things. Daily tasks were affected, but I didn’t even care whether I was there for my boys.”

About 10 years after Lima first noticed a loss in her physical and mental health, in the year 2020, one of her close friends informed her about another person who had had such symptoms and connected them to having breast implants.

Lima’s right breast implant, which she had for over 20 years, was found to have mold after Polsen removed her implants.

People who have had implants in for 20 years or more, according to Polsen, will probably need to have them removed.

According to Polsen, “the surgeon may sometimes insert his finger straight through the implant during surgery; it’s virtually disintegrated.”

“The longer she wears silicone gel-filled breast implants, the more probable she is to develop local problems or poor outcomes,” the Federal Food and Drug Administration said in a 2011 update.

According to the FDA, 1 in 5 main augmentation patients and 1 in 2 primary reconstruction patients need to have their implants removed within 10 years after their initial implantation.

At their 10-year follow-up, patients may opt to “have their implants changed or can decide to undergo tests such as ultrasound or MRI to assess the status of the implant,” according to Polsen.

After Lima’s explant procedure, which took three hours, her face almost instantly went back to normal. Although Lima stated she was able to get rid of the most of her problems, some seem to have lingered.

“My inflammation is gone, and my joint discomfort is gone, and stuff like that,” Lima said in reference to an autoimmune condition that affects the thyroid gland. “But my Hashimoto’s won’t go away.” “And my vision isn’t the same, either.”

Lima said that 90 percent of her problems vanished six months following the explant.

Thousands of women have claimed that their breast implants are making them sick, but as Insider has documented, the medical establishment has not formally recognized or diagnosed these illnesses.

More study is needed on the condition, according to experts, before a definitive diagnosis can be established. Nevertheless, since the FDA outlawed silicone implants for the majority of patients from 1992 to 2006, the issue has been divisive among the cosmetic surgery profession for the last three decades.

The question of breast implants and breast implant illness has lately received a lot of attention, according to Polsen. There are research being conducted in our culture, and we are actively gathering and reporting the data.

“I meet patients on a regular basis, and often a patient does not require an implant and may choose to have a procedure called a breast lift and forego the implant entirely,” he said.

According to Lima, who spoke to Insider, she is not against to implants but wants to make others who are considering getting them aware of the risks.

“If you’ve already made that choice and have them, my suggestion would simply be to pay attention to your body and be mindful. Be open to the possibility that it may be the implants as well “said Lima.

»10 years passed before a Texas woman’s implant is removed«