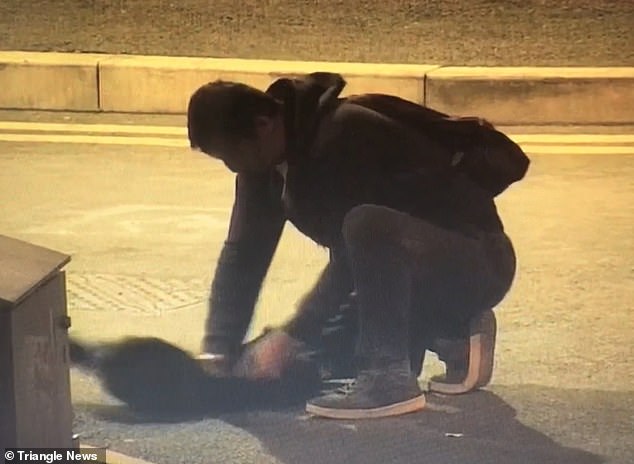 In the video, 46-year-old Artur Zakowicz is shown yanking his black-and-white cat Bashik by his skin, hitting him, and then slamming him to the ground.

The cat can be seen desperately attempting to escape its owner’s grasp throughout the incident, which was recorded outside his Chester, Cheshire, house.

After receiving a thrashing for 34 seconds, Bashik ultimately manages to escape and take off running.

A veterinarian who responded to the incident said that the cat would have surely felt agony from having been beaten so often.

After watching the CCTV, Cheshire Police and the RSPCA located Zakowicz.

In accordance with the 2006 Animal Welfare Act, Zakowicz, who was summoned to Chester Magistrates’ Court, pleaded guilty to inflicting a cat needless pain.

At his punishment, a five-year animal ownership prohibition was imposed.

A representative for the RSPCA stated: “On March 24, Artur Zakowicz was seen on surveillance footage conducting the despicable crime in Charles Street close to the defendant’s residence.

The black and white cat that belonged to him could be seen being grabbed by the skin in the video.

And throwing the cat to the ground while brutally smacking him six times with his hand.

Before the cat was able to flee, “he then snatched up the cat, named Bashik, roughly by the skin on his back.”

The spokesman said, “Zakowicz was located, and on April 16 both the RSPCA and Cheshire Police visited his property.

There were no obvious signs of attack-related injuries when Bashik was checked later that day at the RSPCA Greater Manchester Animal Hospital.

However, a veterinarian said that any soft tissue injury may have recovered over the interval between the occurrence and the examination.

RSPCA inspector Naomi Morris claimed in a written statement submitted to the court that she had seen CCTV evidence of the assault at Blacon Police Station.

And accompanied a police officer to Zakowicz’s apartment, where he confessed to the assault and granted the RSPCA permission to remove the animal for a medical examination.

‘Persisting symptoms of bruising and soft tissue swelling would not be anticipated when considering the examination was conducted 23 days after the CCTV event,’ the vet’s professional opinion concluded.

“Radiographically, no skeletal injuries were discernible.”

However, after seeing the assault, the veterinarian determined that Bashik would have been “in agony for a period of many hours, probably longer.”

Bashik has been placed in the custody of the RSPCA, which will find him a new home.

Zakowicz was also given a year-long community punishment with 200 hours of unpaid labor and 15 days of rehabilitation activities in addition to the ban.

»While trying to flee, sadistic owner beat his beloved cat«