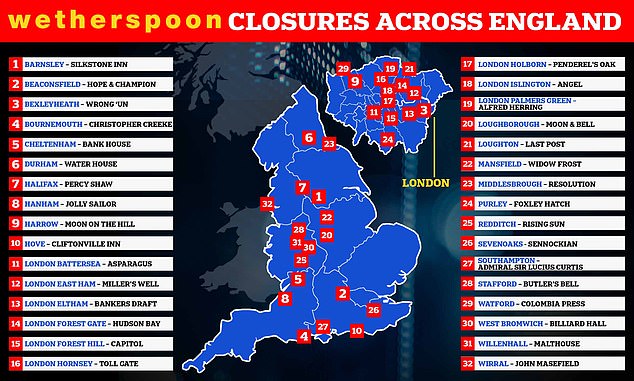 Due to escalating expenses, the UK’s largest pub chain, JD Wetherspoon, has announced it would close 32 of its establishments.

After announcing it might suffer losses of up to £30 million, the hospitality company, which runs 800 pubs throughout the UK, said it had taken the ‘commercial choice’.

Eddie Gershon, a spokesperson for the firm, said in a statement: “Occasionally, Wetherspoon does put some of its pubs up for sale.

This is a business choice.

We recognize that both consumers and employees will be unhappy. Until they are sold, the bars will remain Wetherspoon locations.

The 32 properties, which include a mix of 10 freehold and 22 leasehold apartments, will be marketed by Savills and CBRE.

Following the success of our past marketing initiatives for JD Wetherspoon, Paul Breen, Director at Savills, said: “We are thrilled to be presenting these 32 properties to the market.

These locations are attractive to a wide spectrum of prospective purchasers since they are beautifully designed and furnished to a high quality.

The transactions, according to the agents, were a “rare chance to buy significant, landmark public houses with a high degree of build out in high profile locations.”

According to rules, employees are anticipated to be moved with the pubs “following completion,” the agents said.

All 32 buildings are included in the portfolio, with yearly rents ranging from £47,500 for the Willenhall Malthouse to £288,000 for the Holborn Penderel’s Oak.

The Rising Sun in Redditch and the Resolution in Middlesborough are two further pubs that are being put up for sale.

The Grade II listed Capitol pub in Forest Hill, south east London, is one of the largest pubs offered for sale.

The structure first served as a movie theater in the 1920s, serving that use until the 1970s, when it was converted to a bingo hall, serving that purpose until 1996.

The building’s previous movie circle is still there and is currently utilized for storage and managers’ offices.

Tim Martin, the head of Wetherspoon, spoke of “significant” pressure on expenses earlier this year as personnel and energy costs increased amid worries that the pub operator could have to boost prices.

Pub patrons noticed pricing increases, including a 20p hike for a pint in London.

Martin subsequently cautioned that the projected alcohol tax freeze would not go far enough to support pubs after the Chancellor’s so-called “mini budget” earlier this week, as business leaders warned that employment in the hospitality industry was still “on a knife edge.”

In response to the news, Mr. Martin told MailOnline: “An alcohol duty freeze is nice, but the underlying difficulty for pubs is that they pay far higher business rates per pint than supermarkets, in addition to the fact that pubs must charge 20% VAT on food sales whereas supermarkets do not.

Pubs will suffer and supermarkets will prosper as long as there is inequity.