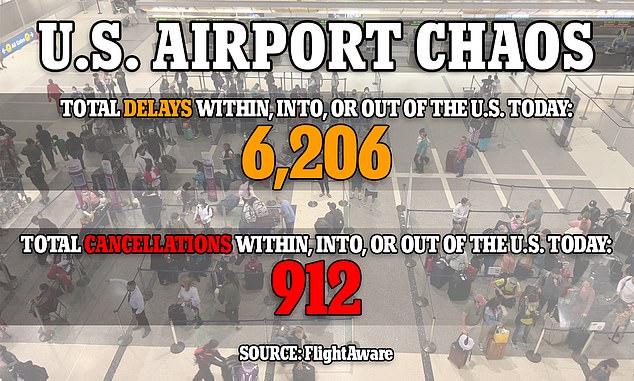 As American passengers experience yet another weekend of travel mayhem with more than 1,000 cancellations, a union representative for flight attendants warns that US air travel is experiencing a “breakdown” and that the “job is not sustainable” for overworked workers.

As hundreds of flights were grounded on Friday due to thunderstorms on the East Coast, America’s airport woes persisted.

FlightAware, a company that monitors the status of flights across the globe, reports that 1,142 domestic, international, or transatlantic flights were canceled or delayed on Friday.

The overall number of canceled flights on Saturday was 657, and by 8 p.m. on Sunday, that figure had almost doubled to 912, with 6,512 flights delayed.

Allie Malis, an American Airlines flight attendant from the US who serves as the government relations representative for the Association of Professional Flight Attendants, shared her opinion on the commotion with CNN Travel.

Malis stated, “There’s some type of breakdown going on that I feel should be avoidable.”

She spoke about “uncomfortable” scenarios when crew members would have to rush through the airport to reach their next flight after being delayed on incoming aircraft.

Although I’m sure the airlines wish we could, Malis added, “Sometimes the passengers are celebrating that you’re there because it means their jet is going to depart, or even that they’re furious — they believe it’s your responsibility that the flight has been delayed when you can’t operate two planes at once.”

Due to the epidemic, several airlines made workforce reductions and have run on a skeleton crew for the most of the previous two years. But the airline sector is finding it difficult to keep up with the increase in demand for travel.

Daniel Kassa Mbuambi, a Lufthansa flight attendant stationed in Germany, told CNN Travel, “I believe it’s a really challenging scenario for everyone.” He added, “The lack of crew, delays, cancellations, no luggage.”

Mbuambi said that the predicament had put a burden on the crew, who sometimes had to spend the night at the airport as they waited for their subsequent flights, which were often flown with a bare minimum of crew members on board.

Malis stated that it is discouraging when airlines claim that present problems are caused by employee absenteeism.

Because the airlines didn’t properly prepare, she continues, “it’s sort of upsetting that we’re being blamed for any kind of labor scarcity or operational mismanagement.”

When we’re already sort of working ourselves to the bone, Malis said, “Why would anybody want to apply to be a flight attendant or any other airline worker?”

Malis believes that this autumn might “be a fantastic chance to reset, to make sure our systems are operating correctly to manage huge levels of traffic.” Summer air travel is typically anticipated to strain the system.

Malis continued by saying that she thinks overhauling the present air transportation system would be the only long-term answer.

Since we travel for a job, Malis said, “We, as flight attendants, we’re right there with our customers, we’re in it with them, and we experience their frustrations directly, if not even more.”

We really want want them to go where they want to go, and we want to maybe say farewell with a smile. “We want to do right by our passengers,” the driver said.

“We can see these poor folks who are just trying to get to where they need to go, and we can read their tension and feel their anxiousness.

Although it has grown since the pandemic’s peak, the current number of Americans who travel is still below that of the pre-covid period.

In comparison to the same day in 2019, the US Transportation Security Administration examined more than 2.1 million travelers on Wednesday at airports around the country.

The three main airports in the New York City region and Reagan National Airport outside of Washington, D.C., had the highest number of cancellations this past weekend.

Only 14 flights were canceled and 443 delayed on Sunday for Jet Blue, which saw the least amount of inconvenience.

As American Airlines stated it will be reducing two percent of its flight schedule in September and October, pandemonium persisted this weekend, according to CNN.

The airline claims that the reductions were “proactive changes” made to account for the resources it now has on hand and include a “buffer” into the remaining summer travel plans.

The airline claims that if customers don’t like the revised flight plans, they would be contacted individually with “alternative travel choices” and given full refunds.

The airline also disclosed that as of September 7 it would discontinue operations to four smaller locations.

They announced that they will stop operating flights to Dubuque, Iowa, Toledo, Ohio, and Islip and Ithaca in New York.

A “shortage of regional pilots,” according to American Airlines spokesman Brian Metham, was to blame for the modifications.

In response to the regional pilot scarcity, “we have curtailed our regional flying in recent months, like many network airlines,” he stated.

The US Department of Transportation has proposed a new regulation that would broaden the conditions under which airlines must provide refunds. This is when the flight scrambles occur.

Currently, customers may only get refunds if an airline has “seriously altered the itinerary or delayed a trip” and they decide not to board.

Although the proposed plan would alter this, the DOT currently does not specify what is meant by “significant” in this context.

Significant modifications would include those that influence departure or arrival times by three hours or more for domestic flights and by six hours or more for international flights, according to the new regulation.

The number of connections, the airport the aircraft is arriving at or leaving from, and whether or not someone’s travel experience has significantly declined are also included.

Transportation Secretary Pete Buttigieg said in a statement that “this new proposed regulation will safeguard the rights of passengers and assist guarantee they receive the timely reimbursements they deserve from the airlines.”

When travel increased to around 88 percent of pre-pandemic levels in July, it did so more quickly than anticipated, and airlines were unable to raise manpower in time.

In an effort to increase the dependability of the remaining flights, they have begun reducing timetables.

More than 21,000 flights, or 2.7 percent, were canceled by American airlines in June, up from 1.8 percent in June 2019—the month before the epidemic forced employees to resign from the industry.

However, the airlines performed better in July, cancelling 14,000 or 1.8 percent fewer flights.

More delays have been occurring recently; in both June and July, they were higher than 23%.

»US air transport is “breaking down” Flight attendant warns«