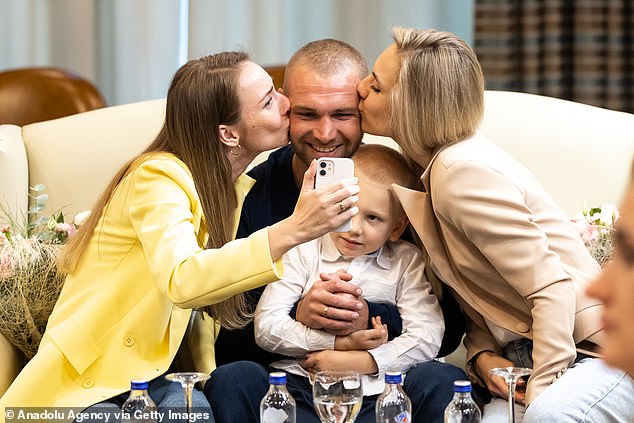 Olena Zelenska, the first lady of Ukraine, was among the first to welcome the valiant Mariupol defenders to Turkey after a prisoner exchange won their release from Russia.

Five of the commanders who led the three-month defense of the port city saw scenes of bittersweet delight as they were finally allowed to hug their eager children and hold their loved ones once again.

Denis Prokopenko, Svyatoslav Palamar, Denys Shleha, and Marine commander Serhiy Volynsky were among them. Each had endured months of torture, neglect, and hunger while the Russians broke their promises before the defenders surrendered.

Andriy Yermak, Head of the Presidential Administration, presented the Order of the Golden Star and the Hero of Ukraine title to the four heroes for their determination to resist Russian besieging troops at the vast Azovstal steel factory on the Black Sea coast while under continual fire.

They had to wait out the whole battle in Turkey in a secret location under the supervision of Turkish President Recep Tayyip Erdogan as part of the agreement the two warring parties made to bring them home.

When they were last seen being transported to prisons akin to Nazi camps, many people worried they would never again experience the happy reunion with their eagerly awaiting family.

Many people had doubts about their ability to survive. Azov is seen by Russian hardliners as the worst of the worst, along with Nazis and war criminals, and they have been pushing for show trials and executions.

Midway through May, a nearly three-month siege of the port city of Mariupol came to an end when more than 2,000 defenders, many of them members of the Azov unit, marched out of the twisted ruins of the Azovstal steel complex into Russian custody.

According to a Ukrainian intelligence official who spoke to Ukrainska Pravda, “We decided that the troops – both rank and file and officers – would be permitted to reside together, although by tradition they would have been imprisoned separately.”

But it became rapidly apparent that these terms would not be upheld, the officer claimed.

The original conditions of their surrender were for the group to be confined together at the Olenivka detention camp on Russian-occupied Ukrainian territory.

However, the Russians promptly went back on their word and sent the party to various prison camps on Russian land.

In the end, this turned out to be a surprising benefit. After the Azovstal defenders had been evacuated, a rocket fired from the Olenivka prison camp in late July killed at least 40 Ukrainian prisoners of war.

A startling flood of news about an unexpected jail transfer surfaced in late September, just when it was beginning to seem as if the pledges had been broken and the defenders would never be seen again.

For long months, covert discussions for their release had been taking place, involving Ukrainian agents and the Russian FSB, middlemen, international leaders, and even the Pope.

In all, Russia agreed to release 215 Ukrainian inmates, including the five Azov leaders, 10 foreign detainees, 200 Ukrainians, and Britons Shaun Pinner and Aiden Aslin, in exchange for only 56 of their own.

Viktor Medvedchuk, Putin’s treacherous right-hand man in Ukraine, was among the captives freed; according to President Zelensky, he was traded for 200 Ukrainians.

Before Putin started his astounding full-scale invasion of his Slavic neighbor, the US said that the Kremlin had chosen Ukrainian citizen Medvedchuk to head a puppet government in a postwar state.

After years of running the pro-Moscow Ukrainian OPZZh [Opposition Platform – For Life] party, which served as Putin’s Trojan horse in Ukrainian politics, it was something that most obviously distinguished him as a traitor.

In an attempt to flee capture, Medvedchuk was ultimately apprehended in April while posing as a Ukrainian serviceman.

He finally proved that he had been a Putin agent all along with his exchange, which included six times as many individuals.

Zelensky gave his followers the assurance that exchanging such a high traitor was worthwhile and that Medvedchuk had already given spies a wealth of information.

And many would think it was a little price to pay for saving the Azovstal defenders from the misery they experienced for 19 weeks.