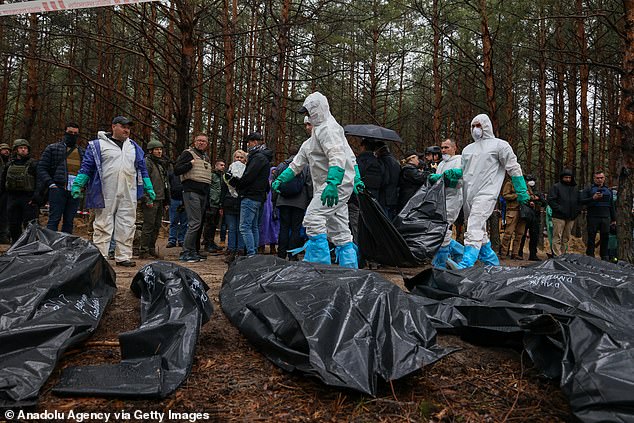 In the northeastern town of Izyum, which Kyiv reclaimed from Russia last month, Ukraine has found two new mass graves containing the remains of hundreds of people.

After being occupied by Russia for four months, the Kharkiv region’s Izyum was freed by Ukrainian soldiers a few days later, according to Ukrainian President Volodymyr Zelensky.

A mile from the Russian border near Kozacha Lopan, Ukraine is also looking into a third alleged mass grave site that is believed to be in an abandoned and shell-damaged industrial poultry farm.

Although the exact number of dead is unknown (Ukrainian forces and authorities claim to know between 90 and 100), the poultry farm is surrounded by wreckage that bears witness to recent conflict.

The gruesome finds were reported after Ukrainian police discovered a massive burial site further south in Izyum that included the remains of 447 individuals near to a cemetery.

The mass graves included the remains of 425 individuals, including 22 Ukrainian military and five children.

“Sanctions must persist.” Both the financial and political effects of these penalties will be felt.

A possible mass burial has been found at Kozacha Lopan, farther north. The alleged burial place has not yet been disturbed, and demining workers have not yet arrived at the location.

Lyudmyla Vakulenko, head of the Kozacha Lopan local government, stated, “I was informed by the troops that came to our hamlet that they spotted a burial location of soldiers, but they didn’t identify the number.”

She said, “They claimed a specialized squad will check into it.

Once it is determined that the location is safe for work, the forensic teams will arrive later this week. On Monday, troops cautiously went through unpaved areas, staying clear of mines and unexploded bombs.

The darkest concerns of Ukrainians, who are still in disbelief after the discovery of a makeshift woodland cemetery in Izyum with 447 remains, will be confirmed by rumors of the likely mass grave.

Oleg Synegubov, the regional governor of Kharkiv, said that 30 of the victims looked to have been tortured before their deaths and that the majority of the Izyum corpses bore evidence of a violent demise.

Whose corpses are now hidden at the poultry facility remains unknown. AFP was informed by soldiers manning the facility that they anticipated finding the bodies of both Russian and Ukrainian soldiers as well as local people.

However, Vakulenko claims the officer who informed her of the discovery said that the military believes it to be a burial for troops, and she has since learned another piece of information about the men’s possible identities.

According to her, on April 22, a Ukrainian force from the 72nd Mechanized Brigade attempted to assault a Russian force that had dug in close to the poultry facility but were severely routed.

This month, Ukrainian troops eventually freed the region, and over the weekend, Vakulenko—who oversees the civil administration in the border region to the north of the city of Kharkiv—received a call.

“Yes, a call from a lady by the name of Olena was received on the community hotline. She merely goes by “Olena,” therefore I have no idea whether she is an acquaintance or a relative,” Vakulenko told AFP.

She said that a few of her friends or family members were slain on April 22 close to the town of Kozacha Lopan and left her phone number.

“Can I receive any official information?” she enquired. We said, “So far, no.” till the exhumation takes place. Until this component completes its task and informs us of what occurred.

It appears obvious who was there when the burials took place, whomever is buried under the chicken factory. There are several reminders of Russian occupancy in the outhouses and hangars.

Deep ditches the size of the tank that would have crouched there under the shelter of the enormous, metal-roofed poultry barns have been excavated beneath the flooring of several of the sheds.

The leather helmet of a Russian tank crewman hung on a fence post, while a Russian military jacket lay in the muck.

The regiment stationed there, according to Ukrainian soldiers, was recruited in the separatist Georgian province of Abkhazia, which is governed by Russia.

A bunker has been created under the concrete floor of the farm’s mechanical workshop, and the previous occupants have constructed a makeshift gym with a concrete barbell and a punching bag made of car tires.

One of the roof’s corners has a shell hole in it, letting a beam of sunshine into the darkness.