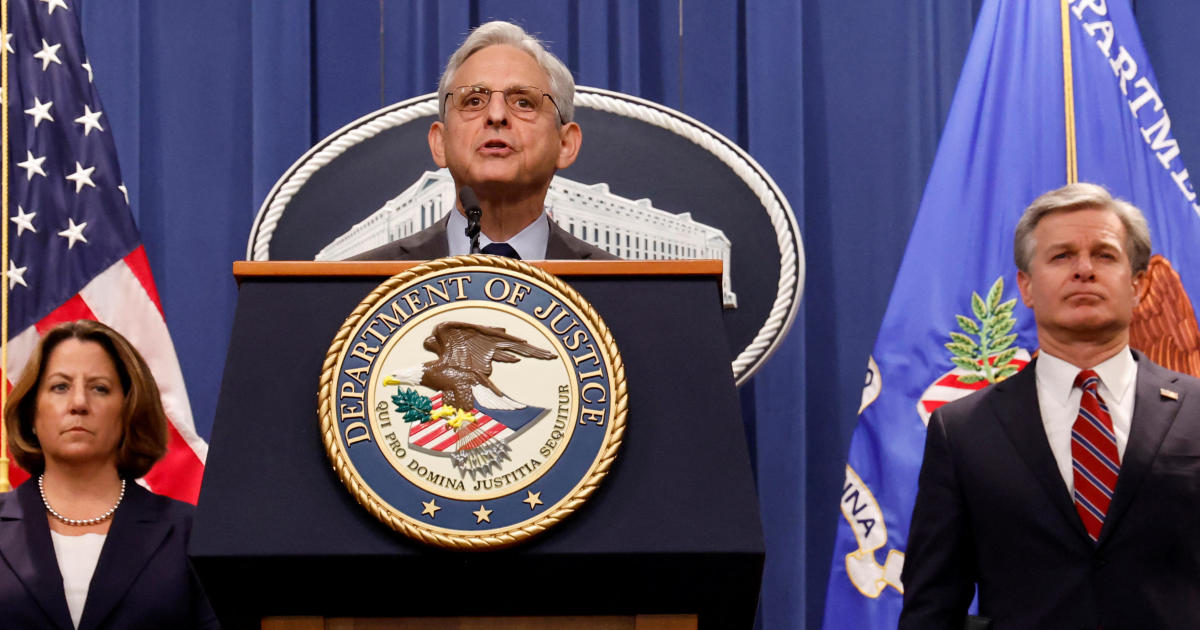 — Washington On Monday, the Justice Department unsealed charges in three separate cases accusing more than a dozen defendants, the majority of whom are Chinese officials, of participating in schemes to repatriate critics of the Chinese government, obtain secret information about a U.S. investigation into a Chinese telecom company, and recruit spies to act as agents of the Chinese regime in the United States.

“As evidenced by these cases, the Chinese government attempted to interfere with the rights and freedoms of individuals in the United States and to undermine our court system, which defends such rights. “They were unsuccessful,” Garland stated.

In one of the cases, two Chinese intelligence operatives were charged of attempting to disrupt a criminal investigation into a Chinese telecommunications company. According to court documents, the pair collaborated with a double agent who supplied them information on behalf of the FBI. Guochun He and Zheng Wang, the two defendants, remain at large. As a result of bribes paid to the double agent, Guochun has also been charged with money laundering.

He and Wang allegedly directed the U.S. law enforcement employee to steal secret material concerning the criminal investigation against the global telecommunications corporation, including papers from the U.S. attorney’s office in Brooklyn, beginning in 2019. In exchange, the double agent received bitcoin bribes totaling $61,000.

The affidavit filed in support of the accusations does not identify the corporation, but instead refers to a February 2020 press statement made by the Justice Department. In the same month, the agency announced accusations against Huawei, one of the world’s major providers of network equipment used by phone and internet firms. The Justice Department accused the telecom giant and its subsidiaries of organizing a decades-long plot to steal trade secrets from U.S. technology businesses.

Monday’s unsealed charging documents describe the relationship He and Wang allegedly cultivated with the unnamed law enforcement official beginning in February 2017. During that time, the agent, acting under the direction of the FBI, allegedly provided “supposed sensitive information” regarding the Justice Department’s case against the telecom company.

Federal prosecutors argue that the two regularly sought information about the Chinese company beginning in January 2019, when charges were initially revealed against the company, “in an attempt to obstruct the prosecution and the ongoing investigation.”

The indictment references communications and phone calls between the two Chinese nationals and the U.S. government employee, including a phone contact on February 4, 2019, in which Wang “indicated interest” in getting non-public information concerning the U.S. government’s investigation into the company.

In August 2021, the double agent sent He a letter requesting instructions regarding the information he desired from American law enforcement. He, the Chinese intelligence officer, allegedly responded that he wanted information about the telecommunications company, stating that “all about the trade talk, attitude, analysis, potential measures, targets, and offers…are useful” and that “specific cases of sanctions aimed at Chinese enterprises are also good.”

Then, in the fall of 2021, the double agent told He and Wang falsely that the official was meeting with the team of government lawyers preparing for Huawei’s trial. According to court filings, in one interaction he asked a U.S. government official whether federal prosecutors would “bring forward a plea” and if there was a witness list he could offer.

The indictment also includes a contact between the double agent and Chinese authorities in October 2021, during which the agent transmitted a single page from a fake “SECRET”-classified internal strategy plan from federal prosecutors. A plot to charge and arrest two Huawei employees residing in China was detailed in the document. According to court documents, one of the defendants, He, responded that the document was “just what I’ve been waiting for” and subsequently paid the undercover agent around $41,000 in bitcoin for stealing the memoranda.

The agent also asked He and Wang for input on the “SECRET” document, and He responded that the Chinese telecommunications business “has not yet given me specific feedback, but they are certainly interested, and my supervisor and they need more information.” Additionally, he informed the double agent that the corporation, thought to be Huawei, would “certainly be interested” in the undercover agent obtaining another section of the strategy plan.

The double agent and He remained in contact until October 20, 2022, at which time they discussed a reward for the work.

Wang Lin and three co-defendants allegedly used their affiliation with a Chinese academic institution between 2008 and at least 2018 to identify, target, and direct individuals in the United States to act on China’s behalf, including attempting to pressure the individual to stop a planned protest against China in the United States and other allegedly “clandestine activities.”

The third case disclosed by Garland involves seven persons who allegedly worked for the Chinese government and were charged with engaging in a multi-year campaign to coerce an American citizen to return to China. Two of the seven indicted individuals were apprehended last week, while the other five remain at large.

Garland stated, with reference to the People’s Republic of China, that the PRC has a history of persecuting political dissidents and government critics who have sought asylum in other nations.

The attorney general stated that the campaign included harassment, threats, surveillance, and intimidation in an attempt to coerce the target into returning to China. Those involved allegedly also harassed the victim’s relatives.