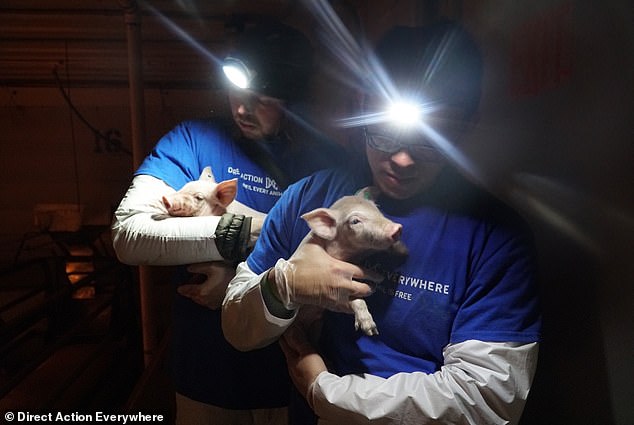 Two animal rights activists were acquitted in the Smithfield Piglet case after jurors determined that they did not take the two piglets, but rather “saved” them from being sent to a slaughterhouse at one of the nation’s top pork producers.

The two piglets they rescued were nursed back to health and given the names Lily and Lizzy, while the rest were abandoned at the pork manufacturing complex that grows over one million pigs for slaughter each year.

At one time, the pair faced up to 11 years in prison on one of the offenses that were ultimately dropped.

The conclusion of their trial occurred on October 15. Following eight hours of deliberation, the jury found them not guilty.

“I am still reeling from this tremendous victory,” remarked Hsuing.

He said, “Not just for openness or responsibility at Smithfield Farms, but for the concept that animals are living beings and not merely garbage,”

He stated that the jury likewise believed the piglets were worthless to Smithfield. As a result, the jury found that they could not have been stolen.

Hsiung stated, “They [the jury] realized we were there because we cared about animal welfare.”

They exonerated us of any criminal liability for burglary and theft because they understood that we believed these creatures required medical attention.

The pig processing plant was shut down after a video labeled “Operation Deathstar” and shared with The New York Times went viral and ended up in the hands of numerous animal rights groups.

According to an essay written by Husing for The New York Times on October 18, Smithfield argued that the video appeared produced when it was not.

According to him, the authorities never discovered the stolen piglets, and the federal government chose not to prosecute charges.

However, Utah prosecutors pursued felony charges of burglary and theft against the activists, who faced prison time if convicted.

FBI investigators initiated a multistate probe in August. Using search warrants, they raided animal sanctuaries in Utah and Colorado in pursuit of the two pigs.

In their search for DNA proof of the crime, government vets removed a portion of a piglet’s ear from one of the sites.

At the shelter in Colorado, federal veterinarians removed a portion of Lizzie’s ear for DNA testing. In Utah, my four co-defendants and I were indicted shortly thereafter,’ he added. “This is despite the fact that a corporate representative testified at our trial that no one at the farm knew the piglets were missing until a video surfaced online.” According to one of the prosecution’s own witnesses, each piglet was worth no more than $42.20.

Hsuiung stated that three of his co-defendants accepted plea bargains with no jail or prison term, but he and Picklesimer desired a jury trial.

During their nocturnal assault in March of 2017, the two showed rows upon rows of pigs in metal crates sobbing desperately to escape and the inhumane treatment they endured. “Gentlemen, we are going to enter Circle 4; this is the epicenter of evil.” On the video, Hsiung stated, ‘You can already hear the screams of the mother pigs, who are confined and suffering, and we will attempt to expose what is happening inside.’

He describes the frightening details in the Times article.

Inside, we discovered and documented piglets that were unwell and underweight. A veterinarian who testified on our behalf stated that one of them was unable to walk properly or access food because of an infected foot wound.

‘The other piglet’s face was covered with sores and blood, and she fought to suck from a mother whose teats displayed horrific reproductive damage,’ the doctor noted in a report after seeing video of the piglets and speaking with caretakers. Given their conditions, it was likely that both piglets would be murdered and possibly dumped in a landfill outside of Circle Four Farms, where millions of pounds of dead pigs and other trash are dumped each year,’ he said.

He continued, “According to national estimates, 14 percent of piglets die before weaning.”

In the distressing footage that Husing shares, he says, “You can hear the clanging as they desperately try to escape these containers by smashing their heads to the point where they have swelling and scrapes on their faces.”

This sow actually destroyed the bar, so the box had to be secured with rope.

He demonstrated how one of the sows attempted to escape and made herself free.

‘As you can see, she smashed apart the bars in a desperate attempt to escape, but there is no escape, and even if she broke down the entire door, she could not squeeze through the space,’ he claimed.

He said, “Oftentimes they pound their heads, bodies, and noses against these steel bars until they are so exhausted that they collapse and fall to the ground, as is the case with this sow.”

“She will be confined here for four, maybe five or six years, repeatedly pregnant against her will, and then slaughtered when she can no longer deliver piglets for the farm that wants her to produce them.

When she is no longer profitable, she will be executed. She will spend her entire life outside.

During their nighttime raid -that took place on March 2017 – the pair showed aisles and aisles of pigs in metal crates wailing desperate to get out and the barbaric treatment they endured.

‘Folks we are about to head into Circle 4 this is the heart of evil. You can already hear the screams of the mother pigs inside – cramped and suffering – and we are going to try and expose what is happening inside,’ Hsiung said on the video.

‘Inside, we found and documented sick and underweight piglets. One of them could not walk properly or reach food because of an infected wound to her foot, according to a veterinarian who testified on our behalf.

‘The other piglet’s face was covered in lesions and blood, and she struggled to nurse from a mother, whose teats showed gruesome reproductive injuries, the veterinarian, who reviewed video of the piglets and spoke to caretakers, said in a report. Given their conditions, both piglets were likely to be killed and potentially tossed into a landfill outside of Circle Four Farms, in which millions of pounds of dead pigs and other waste are discarded every year,’ he wrote.

He added, ‘Nationally, an estimated 14 percent of piglets die before they’re weaned.

In the heartbreaking video Husing shares he says: ‘You can hear the clanging they are desparate to get out of these crates they are smashing there heads to the point they have swelling and cuts to their faces. ‘This mother pig actually broke the bar so they had tie the crate shut.

He showed how one of the mother pigs tried to break out and set herself free.

‘You see she broke open the bars so desperate to escape but there is no escape and even if she broke down the entire door she cannot squeeze through the space that is how small the space that they have to live in is,’ he said.

He continued: ‘Often times they bash their heads, bodies and noses against these steel bars so much that they are just defeated and fall to the ground collapse in fatigue and that is what is happening to this mother pig.’

‘She will be stuck here four years sometimes five or six years living in a crate this size forcibly impregnated over and over again and then finally killed when she can no longer produce anymore piglets as this farm that wants her to produce.

‘When she becomes unprofitable she will be killed. She will never stop outside her entire life.