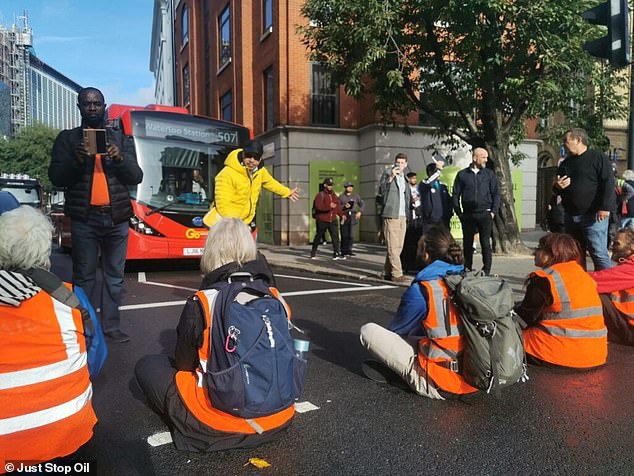 A total of 25 protesters, split into multiple groups, impeded traffic to the north and south of the bridge by sitting down with banners and sticking to the pavement.

In order to continue demanding that the government halt new oil and gas projects, the sit-down for today’s action during the week of action in Westminster started about 10.30am.

According to the organization, today’s action “brings to a close the first week of continuous disruption,” but “future weeks will see the disturbance in the capital expand.”

In a news statement issued today, Just Stop Oil mentioned Grace Lally, a 43-year-old mother of two and childcare provider from Hastings, East Sussex, who was involved in the recent demonstration.

We are genuinely facing social collapse, she said, as more areas of the planet become uninhabitable due to fires, droughts, and floods, and as more crops fail.

How are we meant to go on with life as usual if we face this truth head-on? Our leaders who are doing nothing to move away from fossil fuels are either idiots or psychopaths since we all understand the science and the facts.

In any case, I’m not going to stand by and let them push us over a cliff. We are peaceful, but we must use all of the tools at our disposal, including demonstrations, strikes, and occupations, to attempt to stop the fossil fuel industry and those who support it from destroying all we cherish.

And 37-year-old Southampton deliveryman Phil Snider declared: “I’m taking action because I looked at the research, read the words from Sir David King, and was shocked.” I’m doing this action because I think we should all do what we can.

I’m in a position where I can act, therefore I’m taking this step. Reading about individuals suffering in developing nations who haven’t contributed to this calamity in the same manner as wealthy nations makes me feel horrible.

“The Government has to get a handle on things and halt all new oil production, tax the rich and the businesses who are to blame for this catastrophe, and go full-throttle toward renewable energy.”

‘We will continue in civil resistance because it is the correct thing to do when confronted with a destructive administration,’ a Just Stop Oil spokeswoman said.

The capital rise will be disrupted during the next several weeks until the government declares a stop to new oil and gas development.

“It’s neither brain surgery or rocket science to start the process of shutting down fossil fuel production in this nation. Our lone house is being destroyed by a fire that the government is putting out.