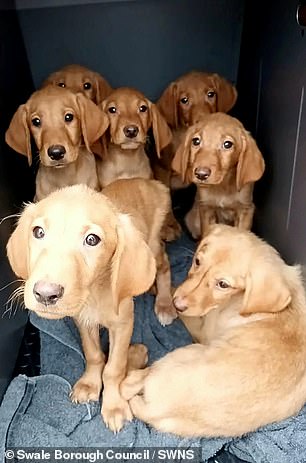 A litter of labrador pups found abandoned in a crate by the side of the road have been nursed back to health in preparation for new careers as prisoner sniffer dogs.

The six gorgeous puppies were between 10 and 12 weeks old when they were discovered malnourished, scared, and infested with mange.

When the labradors were discovered beside the A249 in Kent, they were too terrified to escape the container.

One named Achilles did not survive a mysterious ailment, but his six ‘fox red’ siblings were brought back to health within a few of weeks by the Stray Dog Service of the Swale Borough Council.

After just a couple of weeks under the council’s care, during which they received two vaccinations and a microchip, the puppies already appear vibrant.

The six surviving puppies will now be fostered by a family until they are old enough to begin training.

If they are not selected as prison service sniffer dogs, they will be privately adopted.

A representative for Swale Borough Council’s Stray Dog Service stated, ‘This may be the prettiest photo we’ve uploaded all year, don’t the puppies look great?

They have recently returned from their second round of vaccines and are much healthier than when we first got them a few weeks ago.

Now that they are nearly back to full health, we can finally discuss their futures. In a few weeks, we will have to say a very tearful farewell as the puppies leave to foster homes, beginning their careers as prison service sniffer dogs.

Six labrador pups were rescued after being abandoned in a cage by the A249 in Kent. They will be trained as sniffer dogs for prisons.

Seven puppies were initially discovered malnourished, afraid, and infested with mange after being “discarded like trash.” One named Achilles perished after contracting an unknown ailment.

The abandoned puppies were nursed back to health, given two vaccinations and microchips, and then abandoned again.

We recognize that by making this decision, we expose ourselves to criticism, as it is not what everyone would consider a happy ending, but we are pleased for our children.

They will spend their first year with foster families, maturing and becoming puppies before beginning training. Puppies who do not make the cut will be discreetly rehomed, so everyone wins.

Imagine, from being dumped like garbage to having a future fighting crime, what a remarkable turnaround.

Kelly and Billy have done an outstanding job caring for the puppies, for which we are quite appreciative.

As always, I appreciate your support.

After Swale Borough Council’s Stray Dog Service shared a photo of the rescued puppies and revealed they will become sniffer dogs, dog lovers expressed nothing but love and support.

Despite the dog service’s concerns about negative feedback, an overwhelming number of favorable answers poured in.

One user questioned, “Why negativity? As it should be, the puppies are not lounging on a couch but are instead working. Go elsewhere, you folks offering homes. Good luck, puppies, and EXCELLENT WORK, everyone involved.’

Another said, “Dogs with jobs!” What an absolutely amazing outcome after such a terrible beginning!

A third added, “Wow, that is incredible!!! I adore the fact that they will be sniffing dogs. They are so cute in their coats.

And a fourth responded, “Wow, that is incredible and such a smart move on their part. I hope they all pass the training when the time comes.

Meanwhile, another said, “Excellent news and a lovely shot.” I cannot get why anyone would be pessimistic that working with a handler will be enjoyable. Thankfully, they had a happier finish than they could have had.

The RSPCA just announced that it has received more than 100 cases of abandoned animals every day in 2021.

The charity also reported that the numbers are increasing this year. There were 38,087 abandonment reports in 2021, an average of more than 3,000 per month and 104 every day.

The RSPCA is concerned that a significant increase in pet ownership during the pandemic, coupled with the cost of living problem straining people’s finances, may result in even more animals being abandoned this year.