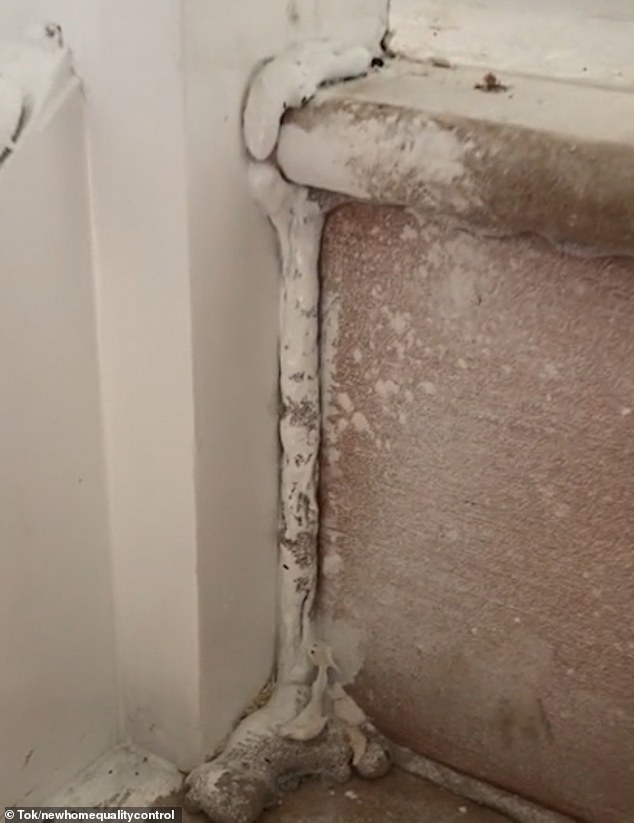 After exposing cowboy builders for their “extremely terrible” pavement, electrics, and brickwork on houses around the UK, a gang of snagging inspectors gained over 560,000 followers on TikTok.

In new construction houses all around the UK, the business TikTok – New Home Quality Control – records a range of problems, such as uneven walls and “confused plumbing.”

Employee Orlando Murphy, 31, who provided the audio, then humorously refers to these developers as “tuna melts” and “yeehaws” in the narration.

Murphy may be heard saying, “Look what they’ve set the turf on!” in one video where garden turf has been placed on top of a bed of pebbles. Smaller boulders have been seen in Shrek’s swamp.

“Like, consider what you’re doing!” Do you really believe that was properly prepped for installing turf? Shocking.’

After they discovered false weep vents in newly constructed houses throughout the UK, the tale first went viral.

The business discovered that builders had been removing bits of mortar from walls in order to snip off tiny pieces of plastic vents and tuck them into gaps in order to pass inspections.

A legal requirement is for weep vents to allow moisture to escape from the space within cavity walls.

Directors John Cooper and Lee Murphy founded the business in February 2018 after serving as subcontractors for a major home builder.

The two were required to “conceal” a problem in a property on a Pembrokeshire assignment shortly before the owner was scheduled to move in.

Cooper told the MailOnline that “this was the cherry on top of a whole bunch of concerns” and that “it threw us over the edge.”

This is when we made the decision to act and reform the sector, and what could be better than exposing all these shady problems, he said?

We established our own quality control a few days later.

Initially, we just intended to assist a few consumers here and there, but today we serve the whole UK. We’ve grown from a tiny business in west Wales to become the top snagger inspectors in the UK.

The company’s major achievement followed the suggestion of a recent recruit to advertise on TikTok.

Cooper said that he had no clue what TikTok was, but once it was brought to our notice, he promised to check at it.

“This is absolutely not what we’re going to do,” I originally said when I returned the next day after leaving home.

The firm began getting a ton of inquiries after its bogus weep vent exposé.

We discovered that 90% of first-time homebuyers are young couples just starting out in life, Cooper added. They utilize TikTok, and we unwittingly exposed it to a large target market.

Prior to the account taking off, the business performed 60–70 inspections each month, increasing that number to 250 or more per month.

Twelve inspectors, two directors, and a marketing manager are now working for the firm.

The inspectors are dispersed around the UK and are supposed to cover a 100-mile radius, ensuring they can give their service to the majority of the country.

The videos of the houses each inspector visits are then sent to Murphy, who uploads and voices them.

Cooper said, “Never!” when asked whether any of the houses they see are snag-free.

We’d be pleased to share any instances of properties that have no or minor flaws, but these are rare, the man said.

The negative really much exceeds the positive, according to reality. All we want is to see the transformation we originally intended to bring about.

Cooper advises first-time home purchasers to thoroughly research developers, either on Facebook groups or via Whatsapp.

Get in contact with your loved ones and friends, and do some research before you purchase, he said.

He said, “Always give us a call for free counsel.” We’re always delighted to assist and attempt to provide our ideas because we have a customer care staff and we’re here to bring about change.