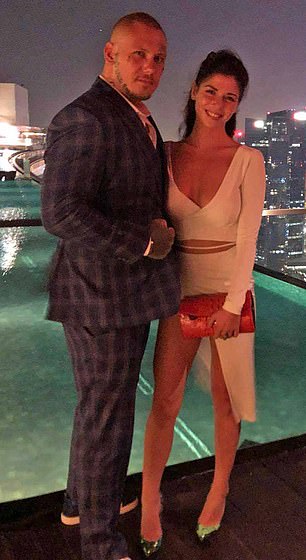 A Swiss court heard that a German bouncer who murdered a British heiress was more concerned about his £900 shoes being scuffed than about his dead girlfriend when police arrived, while he was appealing his sentence.

Anna Reed, age 22, was discovered dead in her luxurious hotel room after her 33-year-old lover pleaded with staff to summon paramedics because she had ‘become blue’ Last year’s trial decided, however, that this was all an attempt to disguise his tracks.

During his trial, the Swiss court heard that he used Anna’s credit card to go on an extravagant spending binge after confessing he “loved the nicer things.”

The jury in the Swiss city of Lugano was then informed that he had met Anna in Thailand in February 2019 and that she had lavished ‘£50,000 on him’ during their time together by paying for hotels, restaurants, and clothes.

She was in the Far East after receiving a round-the-world ticket from her father for her 21st birthday and inheriting £250,000 from her mother, who died in a domestic accident in 2016.

Burly Schatzle alleged in April 2019 that Anna died after he tied a towel around her neck during consensual intercourse in the bathroom of their five-star hotel La Palme au Lac in scenic Locarno.

Judge Mauro Ermani called him a ‘liar’ and a ‘dangerous man’ before sentencing him to 18 years in prison.

His legal team indicated immediately that they would file an appeal, and the trial began on Tuesday in Locarno before Judge Giorgio Roggero-Will.

Anna and Schatzle had argued the night she died because she had threatened to leave him after being informed that he was “using” her.

He had told her he was a company director, but he was actually unemployed, not paying child support, and owed thousands to prior partners.

Ms. Canonica Alexakis stated, ‘He murdered Anna because he needed money, her money, to maintain his lavish lifestyle of expensive shopping and opulent vacations.

‘His life improved when he met her, and according to bank records, she once spent 10,000 Swiss Francs on clothing for him.

“He murdered her in cold blood and concealed her credit card so he could reclaim it later; he claims it was an accident, but we haven’t heard a word of regret or apology from him today.”

She said, ‘Let me give you another example. The investigating officer dispatched to the site recalled how Schatzle replied, “Be cautious, those shoes are worth 1,000 Swiss Francs,” when asked about his clothing and footwear.

‘His fiancée, the lady he claimed to love, had passed away just hours before, and all he cared about was his shoes.

Anna was of little importance to him, if anything at all, other than her wealth. He murdered her for her money since he needed it to support his lavish lifestyle and she had informed him that she was leaving him.

Schatzle told the court that they had returned to their hotel at 2:00 a.m. after spending the night drinking in multiple bars.

As a joke, he claimed he hid her credit card in the ceiling area of the elevator light, but it slipped behind a panel and he was unable to retrieve it.

Schatzle, who was heavily tattooed and clad in dark blue pants, a denim shirt, and black braces, told the court that he and Anna from Harrogate, North Yorkshire, engaged in rough sex.

He and his attorney, Yasar Ravi, allege that she was killed during a tragic sex game, and they are requesting that his murder conviction be reversed and replaced with manslaughter.

She had a blue mark on her neck and an amusing face. I attempted to awaken her. I administered CPR and then went downstairs to find assistance.

When the judge pointed out that a medical report indicated that Anna would have displayed “signs of agony and discomfort,” Schatzle stated that he had “noticed nothing” other than a “puddle of urine.”

Judge Roggero-Will stated, “It is inconceivable that nothing was observed, as the victim emits signs of agony, as indicated by medical data.”

He responded, “The only thing I observed was that she had urinated, so I left.”

Petra Canonica Alexakis, however, criticized Schatzle, stating that he had been lying for three years and that his claims of a “accident and sex game gone horrifically wrong” were untrue.

There is no evidence to support his account of the events, and he has refused to assist with investigators from the outset.

Ms. Canonica Alexakis emphasized how investigators discovered the telephone cable in their room pulled from the wall and Schatzle stated it was already broken.

But she continued, ‘We know that’s not true since he ordered room service from reception, and the hotel personnel confirmed this.

Perhaps Anna was attempting to make a call, or perhaps he did it to prevent her from dialing for help.

She also mentioned that there were no wounds on Schatzle caused by Anna, as she weighed just 55 kilograms compared to his 105 kilograms and had small fingernails.

Ms. Canonica Alexakis remarked, ‘Anna loathed liars and she loathed being lied to, and the night she passed away, she discovered what kind of man Schatzle was.

‘A prior partner had cautioned her about him after being told off by Schatzle’s ex-girlfriend, who said he had twisted and exploited her while repeatedly lying.

The night Anna died, there was neither a sex game nor an attempt to make a joke by hiding her credit card in an elevator.

The medical report indicated a wound to her gums consistent with a hand being placed over her mouth, which contributed to her death.

Anna was described as “attractive and wealthy” in court, whereas Schatzle had “just seven Francs in his account and twenty Francs in his wallet” on the fateful night, according to Ms. Canonica Alexakis.

She said, ‘However, he knew that Anna’s Visa card was filled with 25,000 Swiss francs, which may not sound like much, but for a man with nothing, it was sufficient to depart the country.

Therefore, after murdering Anna, he fabricated the scenario. We know that he hid her credit card in the elevator to collect it later since guests in the hallway heard heavy footsteps that morning.

‘He placed her body in a bath of warm water to delay her death, but when the paramedics arrived, they were suspicious due to the color and texture of her skin.

‘Schatzle waited up to two hours before raising the alarm because he wanted to take the time to save his own life.

Before raising the alarm, he staged an accident in the bathroom, but let’s not forget that he took the elevator to the reception desk.

Would you not race down the stairs instead of eating while waiting for the elevator? And it was observed that he had tied his shoes and dressed himself.’

Schatzle was not into sado masochism or rough sex, as proved by two of his ex-partners. He claims otherwise, but we all know he is a liar.

Anna and her 28-year-old sister Millie were raised in upscale Harrogate, North Yorkshire.

Their father, Clive, is 65 years old and manages the 300-acre, £25 million Copgrove Hall racehorse stud, which he founded.

The family also operates a healthcare company with more than 1,000 employees, and some of their cousins reside in the tax haven of Monaco.

Anna attended Ashville College in Harrogate, which cost £15,000 a year, and despite her family’s wealth, she worked part-time in a restaurant and babysat.

She spent a great deal of time at Jennifer Birtwistle’s equestrian centre in Harrogate, as she was an avid rider.

Clive and Millie stated in a statement to the prosecutor that Anna was likely the most intelligent family member: ‘Neither Clive nor Millie have ever talked publicly about Anna’s death.

She would find a solution to any ­complicated problem.

‘When she entered a room, it was as if a light had been turned on, she adored dancing, and she always took care of her friends.

They knew she could be relied upon, and she was quite generous.

Anna was also an avid athlete. She enjoyed horses, swimming, and skiing so much that she was studying to become a ski instructor. She was a highly social and spontaneous individual.

When she died, it was her final summer of freedom before returning to reality, as she was about to attend college to study mathematics.

Police discovered, among her belongings in the hotel room where she died, four math papers she had brought with her to study while traveling the world.