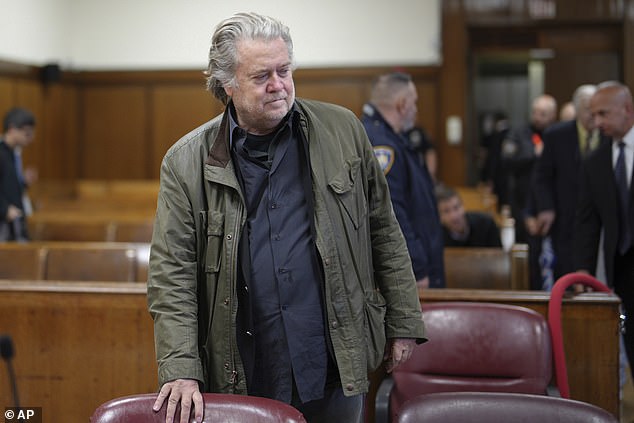 After prosecutors requested a six-month sentence and accused him of acting in “bad faith,” Steve Bannon’s attorneys are requesting that their client not serve any time behind bars.

Bannon’s legal team argues that their client should only get probation after being found guilty of two charges of contempt of Congress in a 19-page document in response to a scathing government complaint.

They contend that the sentencing judge should consider “something more” than only repentance.

“Should a person who has spent their whole life seeking the opinion of experts—as a naval officer, investment banker, business leader, and adviser to the President—be imprisoned for doing so?

“Should a person be imprisoned when the prosecution chose not to bring charges against others who were in a comparable situation, with the only difference being that this individual utilizes their voice to convey firmly held political views?”

They argue that the former top White House strategist should get a probationary term and urge the sentencing court to provide a delay of any sentence to allow for an appeal.

After being found guilty of contempt of Congress, Bannon will be sentenced on Friday. He was absent from the panel looking into the Capitol disturbance and the events of January 6th.

Bannon also requested that he be given the option of serving any term under house detention.

He owns a row house on Capitol Hill where he also records his daily podcast, War Room Pandemic, and where he is anticipated to spend any home confinement.

In a reiteration of their case from his trial, Bannon’s side claims that the veteran Trump strategist was listening to Robert Costello when he was served with a subpoena in September 2021.

Costello referred to claims made by Trump’s attorneys that the president was invoking executive privilege with regard to counsel he received while in office.

As punishment for his refusal to appear before the House committee on January 6, prosecutors are requesting that Bannon serve six months in prison.

In a 24-page sentencing brief, the government charged Bannon of “flouting” the law and keeping possession of crucial records. According to the report, the requested sentence of six months in jail is at the “high end” of the recommended sentences for the crime.

US Attorney Matthew Graves said in the report that the defendant “exacerbated that attack” by disobeying the Select Committee’s demand and authority.

He still illegally withholds information that may be used in the Committee’s authorized inquiry to determine what exactly happened on January 6 and what needs to be done to make sure it doesn’t happen again. That is not acceptable.

The US government’s ability to operate, as well as the freedom, law, and order this nation has known for more than two centuries, depend on respect for the rule of law. Prosecutors came to the conclusion that the defendant’s ill faith defiance and contempt approach deserved harsh punishment.

Additionally, the prosecution wants Bannon to pay a $200,000 fine.

After his former campaign strategist Steve Bannon was accused of scamming donors as part of a “We Build the Wall” plot to utilize private donations to construct border wall constructions, President Donald Trump pardoned Bannon hours before he left office.

In New York, Bannon is still facing state charges related to the alleged fraud. The new federal lawsuit was covered by Trump’s pardon.

Former President Trump was served with a subpoena by the House Select January 6 Committee last week, resulting in yet another possible legal dispute.

Even though he has been portrayed by committee members as the key player in the events preceding up to the assault on the Capitol, legal experts believe it is doubtful that Trump would attend and that he would be prosecuted if he did not.

When Bannon was first told to come before the committee, he invoked executive privilege, claiming he was unable to discuss the subjects at hand without Trump’s consent.

In the letter announcing the sentence, the prosecution attempted to refute his assertion once again.

“He did so despite the fact that executive privilege could not possibly permit the Defendant’s total noncompliance,” the statement reads. “The Defendant was a private citizen who had not worked at the White House for years. The subpoena’s demands sought records and information wholly unrelated to the Defendant’s tenure there.

The government stated: “Since the time he was first subpoenaed, [Bannon] has demonstrated that his true reasons for complete noncompliance have nothing to do with his purported respect for the Constitution, the rule of law, or executive privilege, and everything to do with his personal disdain for the members of Congress sitting on the Committee and their effort to look into the attack on our country’s peaceful transfer of power.” He has been completely and persistently noncompliant.