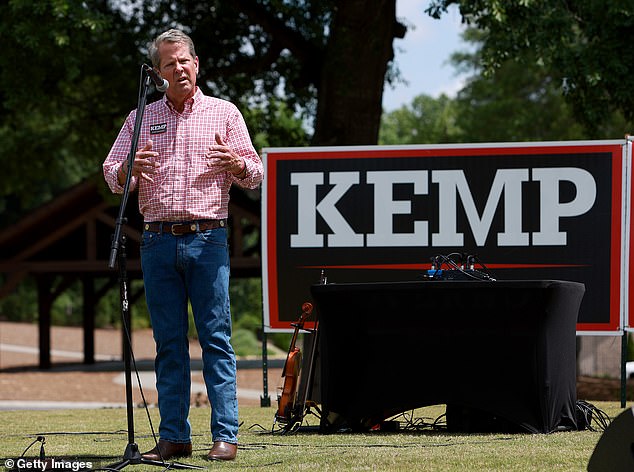 Stacey Abrams declined to declare if she would concede loss if she lost to Republican Governor Brian Kemp again in November despite a recent finding that the 2018 Georgia election was not “rigged,” proving instead that the state’s GOP leadership employs a “racist system.”

The Georgia Democrat is running for governor of the Peach State for a second time, but she wouldn’t say on Fox News Sunday if she still stands by her often repeated assertions that she defeated Kemp in the 2018 race.

At the end of the previous month, a federal court issued a decision rejecting Abrams’ case alleging discrimination and voting suppression.

‘A federal court issued a 288-page ruling on the last three claims in our Fair Fight Action. Abrams acknowledged this in an interview with Fox News Sunday anchor Shannon Bream. “We did not win the claims,” she said.

However, she said that the federal court stated several times in the 288-page judgment that Brian Kemp ran a racist, discriminating system.

The Democratic candidate for governor told Fox that she had accepted Kemp’s victory but would not address Kemp’s allegations of a “rigged” election.

She explained that she was calling the election a victory for Reverend Al Shaprton’s National Action Network (NAN) organization in an attempt to encourage and empower more “marginalized and disadvantaged groups” to cast ballots, saying that her comments that “I won” had been taken out of context.

The Democratic nominee has consistently claimed that the election was “taken from the people of Georgia,” even though she has never specifically questioned whether Kemp is the legitimate governor of the Peach State.

If she loses to Kemp again in their rematch, she wouldn’t say if she would concede defeat this time.

Abrams also said that voting suppression was to blame for her defeat and that the system was “rigged” against her, a claim Donald Trump similarly made after losing the 2020 presidential race.

Abrams stated, “I won,” in an interview with the New York Times.

Abrams maintained her refusal to refer to Kemp as the “legitimate” governor, even as she acknowledged that she could not “empirically” demonstrate her win.

“I never disputed that I fell short.” Abrams said, “I don’t live in the governor’s house; I would have noticed,” during a recent appearance on The View on ABC.

Since her loss in 2018, Abrams, who was previously seen as a rising star of the Democratic Party, has lost favor.

When schools were still required to take COVID-19 measures, she drew a lot of flak for appearing without a mask with a group of masked children and staff at an elementary school in Georgia.

Despite the criticism, Abrams is still vying for a national political post.

Next month, Kemp and Abrams will square off once again in a race for the Georgia governor’s office.

The Cook Political Report rates the Georgia governor’s race as “leaning red,” which means Kemp is far from a lock to defeat Abrams for a second straight time.

After her lawsuit challenging the state’s alleged discriminatory and repressive election tactics was rejected, Abrams was dealt a loss. Just after she lost, the lawsuit was originally filed in November 2018.

In a statement on September 30, Raffensperger stated, “This is a victory for all Georgia election officials who commit their life to safe, secure, and accessible elections.”

“Stacey Abrams’ assertions of a stolen election and voter suppression were nothing more than poll-tested hyperbole that was unsupported by facts or proof.”

Abrams said on Sunday morning that she was concerned that voter suppression, which mostly affects black and poor voters, might result in another loss because it prevents members of disadvantaged groups from casting ballots in the state.

In Georgia, there has been a net gain of 763,380 voters between the last primary and the current one. The question was put to Abrams on Sunday by Shannon Bream of Fox News: “That seems like the reverse of voter suppression.”

She said, “Voter suppression is about the hurdles and difficulties to access, not turnout.

Voter suppression, according to Abrams, occurs when it is difficult to register, remain on the rolls, cast a vote, and have that ballot tallied. “And in the state of Georgia, we adequately demonstrated – and an increasing number of voters have had trouble doing so.”