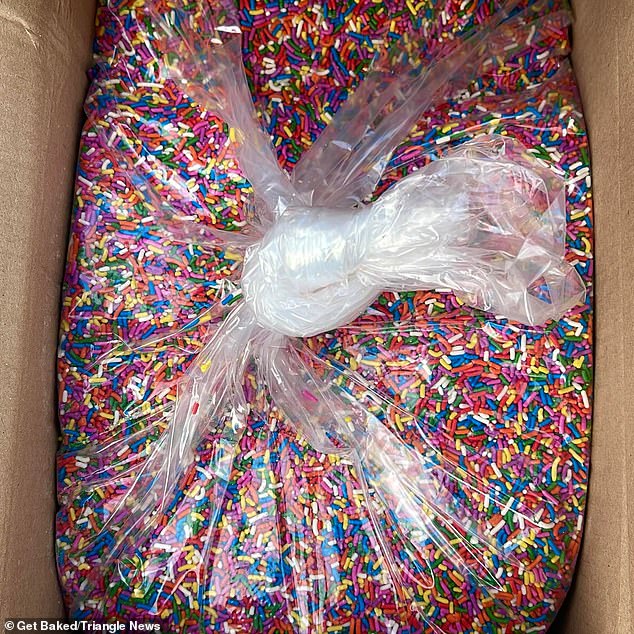 A bakery owner who received criticism for using unlicensed sprinkles from the US has discovered a “legal loophole” to make his own version and claims they are the brightest in the UK.

Get Baked, which was at the center of “Sprinklegate,” was raided by Trading Standards last year as a result of an anonymous tip from an unhappy customer, and it was forced to remove several of its best-selling items.

Inspectors discovered E127, which is only permitted in candied cherries and has been related to children’s hyperactivity, in the sprinkles.

Officers questioned Richard Myers, the owner of the bakery, about the US-produced sprinkles, which were allegedly brighter than those created in the UK. They also confiscated samples for testing.

During this time, devoted customers gathered outside the well-known store in Headingley, Leeds, as he was forced to remove beloved merchandise off the shelves.

Then Richard took things into his own hands and developed Expen$ive sprinkles, Get Baked’s very own and entirely legal version of the colorful toppings.

‘Sprinklegate,’ he now claims, was among the nicest things that could have occurred to his company.

People sometimes ask me why I’m so enthusiastic about sprinkles, and I respond that they are a wonderful source of memories for me.

“I’m transported back to my youth when I think of the vivid, multicolored fun-pellets that ought to come to all of our imaginations when we think of sprinkles.

If anything, their pastel nature detracts from the liveliness and festive atmosphere of anything unfortunate enough to be decorated with them.

Richard believed it was exceedingly improbable that Get Baked would discover any legal sprinkles worth utilizing after his encounter with Trading Standards.

He attempted to use sprinkles produced in Britain, but they were drab and the color ran, he said.

The married father of one took things into his own hands and made sprinkles that resembled those sold in the US but complied with UK legal requirements.

Get Baked spent eight months working out a “legal loophole” that would allow them to manufacture sprinkles in the US, but their work wasn’t done there.

Richard established a brand-new company to sell the colorful embellishments, enabling consumers to spice up their own baked goods at home.

The strange thing is that “Sprinklegate” apparently turned out to be one of the finest things that could have happened to Get Baked, he remarked.

“It launched the company into realms that are extremely tough to enter without a lot of luck, which is all that any of it really was,” the author said.

The only talent I have was capitalizing on everything, and I would encourage anybody in a similar situation to do the same.

The price range for expensive sprinkles ranges from 160g bottles for £12 to 1kg bags for £40.

The business is known by Richard as “the home of the greatest sprinkles in the world.”

We are immensely thrilled to provide hobby bakers, home bakers, little dessert shops, big bakery chains, merchants, and everything in between, the author said in his letter.

With a product for which we have taken every precaution to preserve its quality while assuring strict adherence to EU regulations.

Until you compare our sprinkles to the traditional, ghastly British counterpart, you won’t realize how colorful they truly are.

It’s that simple: “They’re the finest you can get.”

In fact, Richard wants to capitalize on the drama fueled by cookies by launching a course that explains how he started his sprinkle company.