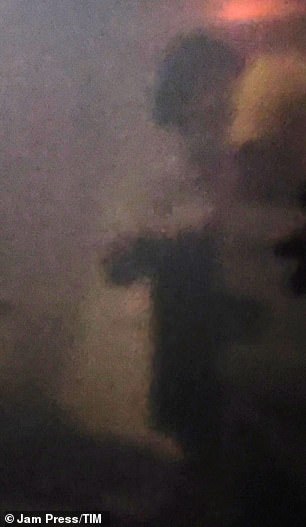 As an Indian plane’s cabin filled with smoke and forced an emergency landing, terrified passengers claim they were left coughing and were instructed to begin praying.

footage from the aircraft showed the dense smoke filling the plane, and thereafter, passengers reported having trouble breathing for 25 minutes.

The tragic tragedy happened on board SpiceJet flight SG 3735, which departed from Goa, India.

Vivek Vishal, a passenger, alleged: “SpiceJet endanger people’s lives. Even oxygen masks failed to inflate while we were choking for 25 minutes.

A careless airline should face severe punishment, according to the statement.

A lady can be heard constantly saying “Stand down” in a footage while beeps are audible in the background of the smoke-filled jet.

She uses a weak lamp to guide her commands when they are in total darkness, telling everybody on board to “bend down, remain down.”

A guy can be heard conversing on the phone as many ambulances are spotted at the heavily rained scene.

Crew members standing at the side of the runway with wheelchairs in anticipation of help may be seen wearing hi-vis jackets.

At least 86 passengers were reportedly on board the airplane when it was forced to make a complete emergency landing because of a problem.

Following the landing in Hyderabad, India, when the pilot alerted air traffic control about the situation, local accounts state that passengers were quickly evacuated.

Allegedly, in an effort to prevent any such occurrences, ground employees were instructed to take all necessary safeguards.

According to reports, employees on board instructed passengers to “start praying” as a result of the terrifying experience, but an airline spokeswoman has refuted these accusations.

Another passenger, Srikanth Mulupala, alleged: “It was embarrassing when the staff instructed us to pray to God and pray for our families.

“Many of my fellow passengers panicked and began screaming,” she said.

Unidentified passenger also claims that the staff took his phone and forced another passenger to erase any images or video of the event.

SpiceJet said that the on-board air conditioning system was to blame for the smoke and that their crew handled the incident in accordance with policy.

Anil P., a different passenger, asserts that a problem with the restroom occurred: “We heard the staff discuss in hushed tones when something happened, and in another 20 or so minutes, the smoke was all around us.”

We thought we may choke. The crew, however, urged us to remain in our seats and to cease chatting when the lights were switched on.

Due to eight recent accidents involving aircraft, the airline is already being disciplined by the Directorate General of Civil Aviation (DGCA).

Currently, SpiceJet flights are subject to a 50 percent limit imposed by the DGCA.