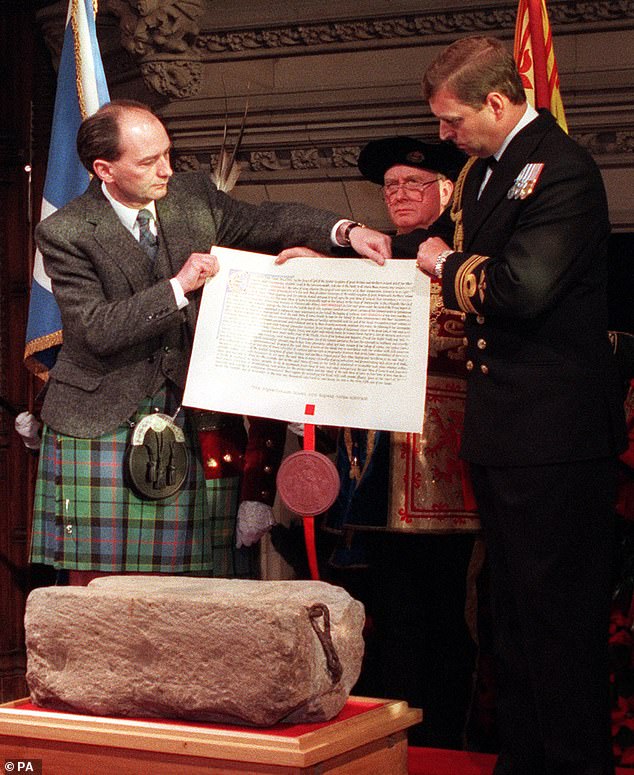 A famous Scottish nationalist who helped take the Stone of Destiny from Westminster Abbey has passed away at age 97.

On Christmas Day 1950, Ian Hamilton assisted in stealing the priceless emblem of the monarchy from underneath King Edward I’s coronation chair.

The stone has been in London since Edward’s army captured it from Scotland in 1296.

Following the news of Mr. Hamilton’s passing today, tributes flooded in, with the Scottish First Minister referring to him as a “legend of the independence struggle” and one of the “liberators” of the Stone of Destiny.

With the exception of the time it was transported for storage during the Second World War, the Stone of Destiny spent more than 650 years in Westminster Abbey after it was taken from Scotland in 1296.

Along with engineering students Gavin Vernon and Alan Stuart, science instructor Kay Matheson, and Mr. Hamilton, the stone was stolen.

The Scottish Covenant Association, a nationalist organization that favored Scotland’s independence from the UK, was a group in which the thieves all participated.

The activists pushed the stone out from beneath the Coronation Chair after forcing their way into the Abbey via a side entrance.

But when they dropped the 24 stone (152 kg) stone, it split in half upon impact with the ground.

The bigger portion of the stone was carried to a waiting vehicle by the burglars using Mr. Hamilton’s raincoat, who then put the smaller piece in another.

After discovering that the stone was gone, the police launched one of the largest manhunts in British history.

The police set up barriers, closing the border between England and Scotland for the first time in 400 years.

The two halves of the stone were first concealed separately; one was buried in a field in Kent and the other was in the Midlands.

A stonemason in Scotland eventually put the fragments back together.

When the police learned that Mr. Hamilton had borrowed books from Glasgow Mitchell Library regarding the stone and Westminster Abbey, they tracked the gang down.

Later, he said, “I’d looked into the whole thing there.”

I had borrowed every book about Westminster Abbey, they discovered after looking through the archives.

In April 1951, the stone was finally located securely. It had been positioned on the altar and covered with a Saltire at Arbroath Abbey.

Then-Prime Minister Clement Atlee was persuaded not to prosecute Mr. Hamilton and his fellow crooks since doing so would be very unpopular in Scotland.

Soon after it was found, the stone was brought back to Westminster Abbey.

The Queen’s throne was positioned over the stone when she was crowned in 1953.

With the Queen’s approval, the stone was brought back to Scotland in 1996 to commemorate the 700th anniversary of its original deportation from Scotland and was erected in Edinburgh Castle on St. Andrew’s Day.

The stone will be returned to Westminster Abbey in time for King Charles III’s expected coronation.

After finishing his education at Glasgow University, Mr. Hamilton went on to become a KC.

Throughout his life, he was politically engaged, first joining Labour and then standing for the SNP in the elections of 1994 and 1999.

In her eulogy, Ms. Sturgeon stated: “I am very saddened to learn of Ian Hamilton’s passing. He was a legendary figure in the independence fight and an extraordinary lawyer.

He will live on in history as one of the people who helped free the Stone of Destiny on Christmas 1950.

He said on Twitter, “Very sad to learn that Ian Hamilton has gone away.”

The Stone of Destiny’s courageous retrieval by Ian, Kay Matheson, and others will be remembered for a millennium. He was a distinguished individual, a brilliant thinker, and a genuine patriot.

The Paisley and Renfrewshire North SNP MP Gavin Newlands tweeted: “Very sad to read that Paisley’s very own, Ian Hamilton has passed away.”

Although a skilled advocate, he will be most known for his work in the independence movement.

The SNP said, “All of us at the SNP are very grieved by Ian Hamilton’s passing.

He will always be regarded as an inspiration to the independence cause and for his part in bringing the Stone of Destiny back to Scotland.

We send our sympathies to his family.