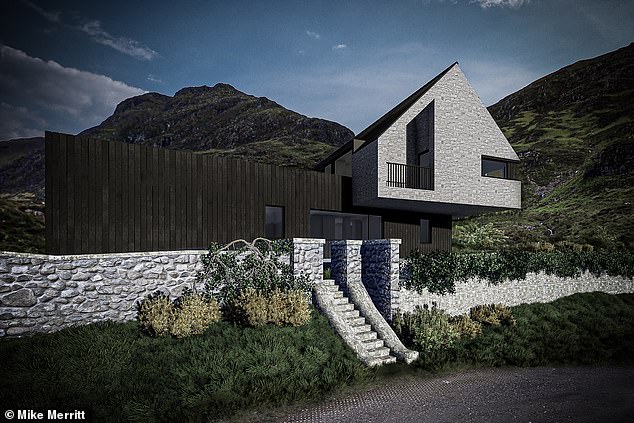 The demolition and replacement of Jimmy Savile’s Highlands hideout with a futuristic new structure have been put on hold by a Scottish council. Jimmy Savile is suspected of abusing 20 children there.

From 1998 until his death in 2011 at the age of 84, Jimmy Savile spent his time in the secluded home at Allt-na-Reigh in Glencoe in the Scottish Highlands.

The family of retail magnate Harris Aslam reportedly paid £335,000 for the cottage, with intentions to demolish the existing structure and erect a contemporary new-build “family house” in its stead.

“Yes, the property has a troubled past, but only for a short while. Mr. Aslam added, “I believe we can accomplish something extremely wonderful with it.

Mountaineering organizations claim that the design doesn’t match with the Scottish Highlands’ “scenic scenery,” which has caused debate over the plans.

Nine months after Highland Council put the application on hold, no decision has been made.

The proposal is still active and is now going through the planning process, according to a council representative.

At this moment, “We are unable to give any more specifics or timeframes.”

Up to 20 young women, girls, and boys are said to have been assaulted at the villa by the disgraced DJ and radio host.

He once hosted supper for King Charles, which was seen in the infamous Louis Theroux film When Louis met Jimmy.

Following reports of his extensive sexual assault in 2012, it has been regularly vandalized; the cottage’s white walls have been painted with “Paedo” and “Jimmy the Beast.”

Over 15,000-member Mountaineering Scotland is disappointed by the delay in the council’s decision and opposes the proposals.

The idea of erecting a cottage at this place is acceptable, the climbing organization remarked, given there has been one there for a long time.

“The design is what we are challenging. This has the effect of bringing attention to the building itself and away from the beautiful surroundings, giving the impression that the building is being imposed on the environment rather than existing within it as the plans imply.

This location is in a National Scenic Area, a classification that recognizes that the scenery is among the greatest in Scotland.

Residents had voiced reservations after the planning application, they noted.

Mountaineering great Hamish MacInnes lived on the property in the 1960s and 1970s.

He created the first all-metal ice axe, established mountain rescue squads, and created the MacInnes stretcher, which is used in rescue operations all over the globe.

The renovations, according to Mountaineering Scotland, would also eliminate MacInnes’ “good influence” on the environment and his “historical value.”

Mountaineer, author, and broadcaster Cameron McNeish said that he did not want the home to be demolished and that the paedophile should not put a shadow on its connections to Hamish MacInnes.

The villas have been routinely vandalized and had messages painted on their walls as a result of discoveries about the late owner Savile’s extensive history of sex offenses.

Despite the fact that Hamish MacInnes is perhaps the greatest Scottish climber, Mr. McNeish said, “For me, the home will always have connotations with Hamish MacInnes.”

“That will always be Hamish MacInnes’ home and have that historical value in climbing.”

It would be unfortunate if the climbing memories were erased along with the tainted Jimmy Savile recollections.

Mr. McNeish claimed that the cottage should be kept and used for the benefit of the neighborhood as a museum, a mountaineering club cabin, or a residence.