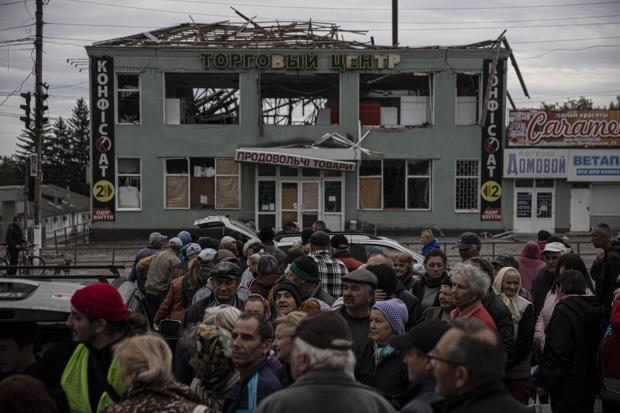 With a week of warfare that has drastically altered the trajectory of the conflict, Ukrainian soldiers on Sunday intensified their counteroffensive in the east of the nation.

As the conflict entered its 200th day on Sunday, Ukraine’s swift effort to retake Russia-occupied territory in the northeastern Kharkiv region compelled Moscow to evacuate its forces in order to save them from being encircled and leaving behind a significant amount of weaponry and ammunition in a hurried withdrawal.

In a celebratory video message late on Saturday, Ukrainian President Volodymyr Zelenskyy made fun of the Russians, claiming that “the Russian army in these days is showcasing the best that it can do – exposing its back.”

He published a video of Ukrainian troops raising the flag above Chkalovske, another town they took back from the Russians during the counteroffensive, on Sunday.

General Valerii Zaluzhnyy, commander of Ukraine’s armed forces, said on Sunday that the country has freed nearly 3,000 square kilometres, or 1,160 square miles, since the beginning of September. He claimed that the Ukrainian forces were now within 50 kilometres, or around 30 miles, from the Russian border.

Since they prevented a Russian effort to take the capital, Kyiv, at the commencement of the almost seven-month conflict, Ukrainian troops’ defeat of the Russians on the battlefield was marked by the Russians’ retreat.

Moscow was caught off guard by Ukraine’s strike in the Kharkiv region because it had moved many of its soldiers from the region to the south in anticipation of the major Ukrainian counteroffensive there.

The Russian Defense Ministry said on Saturday that the soldiers’ departure from Izyum and other locations in the Kharkiv region was done in order to bolster Russian forces in the south-facing Donetsk region, in an uncomfortable effort to preserve face.

The assertion sounded a lot like the rationale Russia used for removing its troops from the Kyiv area earlier this year after their attempt to seize the capital was unsuccessful.

The Russian soldiers gathered around Izyum have been crucial to Moscow’s attempt to seize the Donetsk area, and their retreat would significantly reduce their capacity to pursue their onslaught against the nearby Ukrainian strongholds of Sloviansk and Kramatorsk.

When the conflict in the Donbas first broke out in 2014, Igor Strelkov, the leader of Russia-backed separatists, mocked the Russian Defense Ministry’s justification for the retreat, saying that handing over Russia’s own territory near the border to Ukraine was a “contribution to Ukrainian settlement.”

Russian military bloggers and nationalist commenters expressed their outrage at the withdrawal by decrying it as a catastrophic failure and urging the Kremlin to retaliate by boosting up military measures.

The fact that Russian officials were holding extravagant celebrations in Moscow on Saturday to honour a municipal holiday in spite of the crisis in Ukraine drew harsh criticism from many.

Vladimir Putin, the president of Russia, attended the openings of a massive observation wheel in a Moscow park, a new transportation route, and a sports stadium all at the same time that the Russian soldiers were hurriedly withdrawing from Izyum under fire from the Ukrainians.

The move highlighted the Kremlin’s efforts to maintain the pretence that the conflict it refers to as a “special military operation” was proceeding as intended with no impact on the nation’s condition.

Sergei Markov, a political expert who supports the Kremlin, denounced the Moscow celebrations as a serious political error.

Markov said on his messaging app channel that “the fireworks in Moscow on a sorrowful day of Russia’s military loss will have highly catastrophic political ramifications.” Authorities must not rejoice at a time of grief.

Ramzan Kadyrov, the Kremlin-backed leader of Chechnya, said that the Russian military leadership made mistakes that led to the withdrawal from the Kharkiv area, indicating a possible fracture within the Russian leadership.

They have made errors, but I believe they will learn from them, Kadyrov added. “I will be obliged to contact the leadership of the Defense Ministry and the leadership of the nation to explain the true situation on the ground if they don’t make adjustments in the plan of executing the special military operation in the next day or two.”

Oleksii Reznikov, the defence minister for Ukraine, said on television on Saturday that the Russians had been cut off from their supply routes and forecasted more successes.

He predicted a Russian backlash by saying, “It will be like an avalanche.” One line of protection will tremble and then collapse.

Ukraine has made progress, but the U.S. The chairman of NATO and Secretary of State Antony Blinken both issued warnings on Friday that the conflict would probably last for months.

Blinken warned that the conflict was at a crucial stage and encouraged Western allies of Ukraine to continue their assistance through what may be a challenging winter.

The biggest nuclear power station in Europe, Zaporizhzhia, was reconnected to Ukraine’s energy system on Sunday, enabling engineers to turn down its last operable reactor in an effort to prevent a radioactive catastrophe while war rages nearby.

The facility had been running in “island mode” for a few days before, with just one of its six reactors producing enough energy to run cooling systems and other essential machinery.