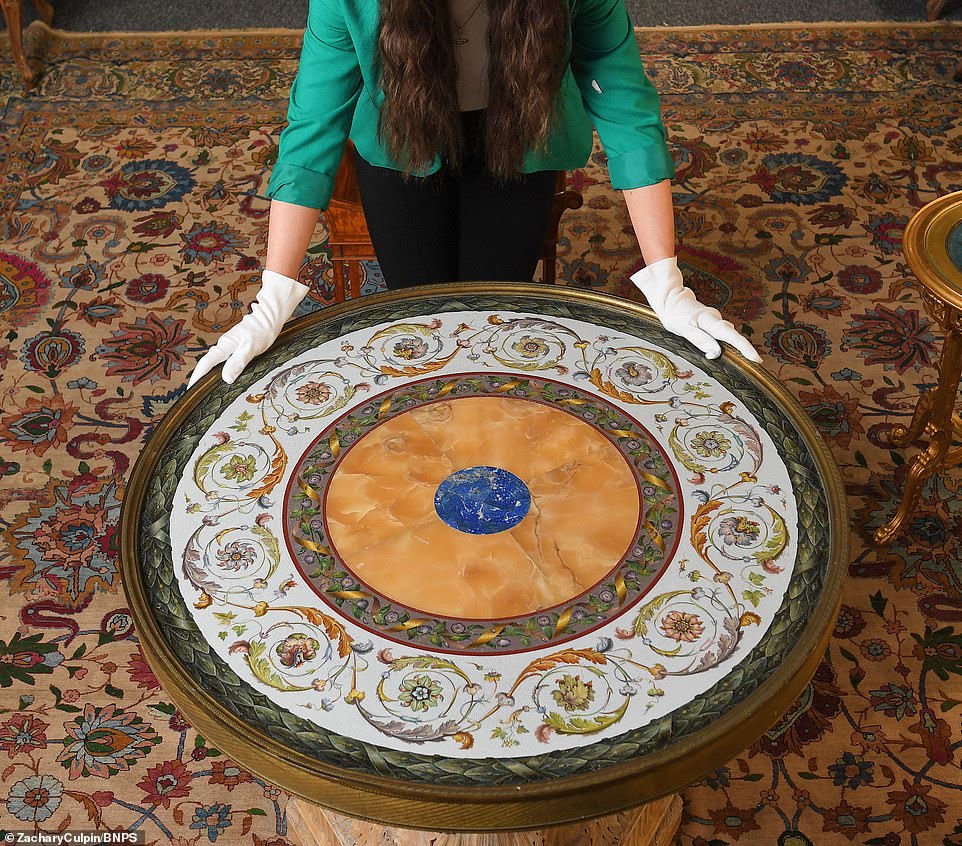 By selling some of the artwork and antiques in their rural estate, the descendants of one of the wealthiest families in the world want to make £1 million.

The de Rothschild family, especially Alfred, who is regarded as one of the finest art collectors of the 19th century, gathered the astounding collection of items.

It is possible to trace the history of every piece in the priceless collection back 150 years to the affluent bankers who once owned Exbury House in the New Forest.

His five sons were successful in growing the business to launch the family’s global banking empire.

The de Rothschild family is now thought to be the wealthiest in the world, with an estimated fortune of £450 billion.

The 18th-century New Forest mansion’s present owner, Lionel de Rothschild, is purging some of its belongings in preparation for an interior makeover.

The Rothschild Raffaelli mosaic table, which has a lapis lazuli gemstone encircled by Egyptian alabaster and rings of design with scrolling leaves and flowers, is the most expensive piece up for sale.

Despite only being worth £80 a century ago, the exquisitely carved table, which is 3 feet high and 3 feet wide and has a base made of Siena marble, is predicted to bring in £60,000.

When Alfred de Rothschild passed away in 1918, it was appreciated after being housed in the Winter Garden at Halton House in Buckinghamshire.

A pair of silver statues from the 16th century depicting a crossbowman and a swordsman are also being auctioned off and are expected to fetch an astounding £30,000.

While a Milanese armourer’s cabinet with 11 drawers encircling a central hinged drawer and plaques from the late 16th century installed on them is expected to fetch £15,000.

Roman historical events are shown on the plaque, including the heroic warrior Gaius Mucius Scaevola.

In addition to being very rich financiers, the Rothschild family was also regarded as the finest collectors of the 19th century, according to auctioneer Mark Yuan-Richards.

The variety of objects for sale from such a distinguished family make this collection very unique, in my opinion.

The objects’ “amazing” history, which can be traced back through the family to their original acquisition, was noted by the auctioneer.

Some of the things have been passed down through the family for many generations, Mr. Yuan-Richards said.

There is something for everyone since the various family members have preferences for various styles of furniture and artwork.

“Finding such a significant collection with such lengthy pedigree is like finding gold dust,” said the seller.

“I believe this might easily equal that,” the seller of the first portion of the collection said, “which sold for a total of £1m.”

For the approaching auction, the collection of items has been transferred to the saleroom. In addition, a table cabinet from South Germany made of gilded copper that is valued at around £12,000 will include an engraving depicting Adam and Eve standing next to the Tree of Knowledge in the Garden of Eden.

In the meanwhile, a pair of French restoration vases that were stored in the same space as the Rothschild Raffaelli mosaic table are expected to sell for around £15,000.

As part of the auction called the sale of the century, a rare Italian wine barrel has a value of £6,000 and a silver chandelier is pegged at £8,000.