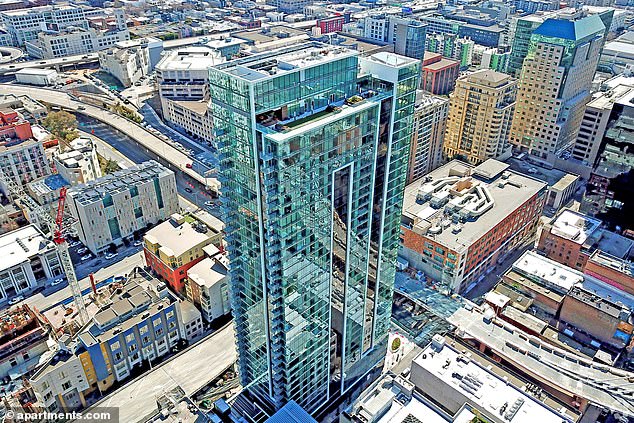 After being made homeless by two significant leaks from the building’s rooftop pool, more than 50 occupants of a luxury condominium in San Francisco are suing the owner of the property.

A 35-story apartment building called 33 Tehama had two leaks over the summer that spilled 20,000 gallons of water into the opulent apartments and halls, forcing at least 400 occupants to leave.

The property’s management business, Hines, is being sued by the plaintiffs for alleged long-term fraud and mismanagement.

When compelled to leave, Rohan Mukherji and his wife Saba Mirza alleged Hines purposefully deceived tenants about when they might return and about the high-repair rise’s work.

In an interview with ABC 7, Mukherji said, “It’s a pandemonium of simply the falsehoods and mess that they have either done because they are inept and just don’t know how to deal with these things or they’re attempting to just enable some fraud.”

The complaint claims that on June 3, tenants were abruptly warned to leave the building when a pipe from the rooftop pool ruptured, sending water pouring into the whole structure.

The tenants, who pay rent ranging from $1,400 to $6,000 per month, complained that Hines had not fully informed them of alternative housing options or the length of time the repair would take.

The complaint claims that Hines reserved two downtown hotels the evening of the flood, but locals claim that the short-term lodging only lasted two days as they waited for instructions on what to do next.

According to Mirza, who spoke to ABC 7, “They essentially told us, you can’t come back in and we don’t know when you can come back in.”

After a second leak from the same water line happened on August 10 while some residents were inside the building attempting to rescue their belongings, the issues at 33 Tehama only became worse.

Following the flooding, Hines said that the structure wouldn’t be livable until 2023 and that the business would stop any assistance to the locals.

In essence, the plaintiffs claimed they were being left “high and dry,” with many of them using all of their money and credit cards simply to get by, while others were “on the verge of homelessness.”

Hines issued the following comment in response to the lawsuit: “Since the water intrusion occurred in June, our team has worked nonstop to provide the displaced tenants with temporary and long-term relocation alternatives.”

“We have given our residents money for personal needs as well as temporary lodging.” We have also put in a lot of effort to restore the structure, consulting with top specialists to find and fix any mechanical issues.

“We dispute the accusations asserted in this complaint and we think that over the process of pretrial discovery, the court and the public will realize the actual extent of our efforts to support people who had to leave their homes during these tragic and unforeseeable occurrences,” the statement reads.

In the end, the case asserts that Hine’s “behaved not just negligently in maintaining the facility but also knew there was an issue before the June 2022 leak occurred and kept it covered.”

Residents claim that before the leaks, a municipal construction inspector had cited Hines for attempting to mend the pipes without licenses.

Allegations have been refuted by the corporation, which claims that “all work presently being undertaken is under a permit provided by the city.”

A request for comment from DailyMail.com was not immediately answered by the San Francisco Department of Building Inspection.

Residents expressed their indignation about apparent mismanagement along with their concerns about the business when video footage from one of their security cameras purportedly showed contractors stealing from the damaged flats.

The camera showed Stephanie Sunwoo’s residence, and she claimed that her checkbook had been taken, along with two fake checks that had been cashed.

She sobbed as she explained her predicament to ABC 7: “So now I sort of have this imminent worry of identity theft and my bank information is out there on the free.”

The 35-story apartment building’s first phase of construction began in 2018, and it offers tenants a luxurious experience with coworking spaces, a spa, a gaming room, a gym, and an optional butler service to take care of chores.

According to the complaint, 33 Tehama is advertised as the height of luxury but is really a tenant’s worst nightmare.

Attorney Nazy Fahimi, who is defending some of the plaintiffs, blasted Hines for allegedly inflicting this misery on the community while providing few solutions and other options.

There was a recurring issue of their not receiving responses. Fahimi told ABC that they were simply put in a precarious situation.