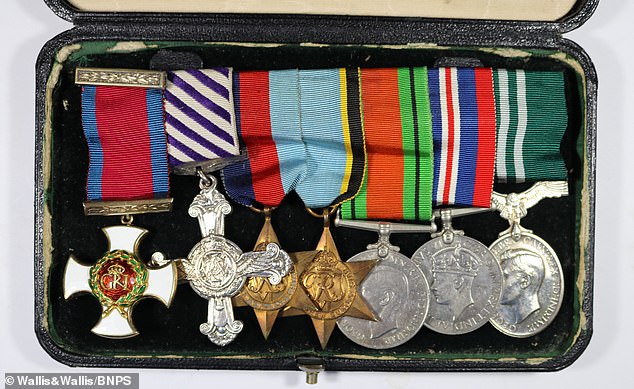 Over £42,000 was paid for the heroism awards given to a World War II RAF hero who oversaw the operation to destroy the German V1 and V2 rocket production.

Despite experiencing “severe” air sickness, Squadron Leader Norman Scrivener, who served with the illustrious Guy Gibson, flew on more than 100 bombing sorties during the war.

The talented navigator was selected to command a squadron of Lancaster bombers equipped with “Pathfinder” radar in 1943 to mark the Peenemunde research facility on the Baltic Sea.

With the help of lights from Sq Ldr Scrivener’s Lancaster, 600 Allied bombers were able to approach the center and strike it.

Then, in order to guarantee that the bombs reached their target, his aircraft had to circle the facility at a low altitude, but it almost collided with the 4,000 lb of explosives being dropped from above.

The operation, which was a success and was immortalized in the 1965 war movie Operation Crossbow starring George Peppard, Trevor Howard, and John Mills, caused a two-month delay in the development of the V1 and V2 rockets.

Due to a stroke of luck later in World War Two, Sq Ldr Scrivener avoided death.

He was set up for one more trip after more missions than necessary were completed until his old commanding commander saw his name on the crew list, took it off, and hired another navigator. Over Berlin that evening, the crew became lost.

Shortly before Guy Gibson received the Victoria Cross for organizing the 1943 Dambusters Raid, Sq Ldr Scrivener piloted under him.

Sq Ldr Scrivener received the coveted Distinguished Service Order and Distinguished Flying Cross for his wartime achievements. He was one of the first RAF navigators to use newly developed radar equipment.

A private collector has already sold Gibson’s medal set and his RAF log book, both of which were autographed by Gibson four times, at auction.

The archive was with a militaria collector for a long time, according to Glenn Butler of Wallis and Wallis Auctioneers in Lewis, East Sussex.

Because they are simple to maintain and always come with a history and backdrop of daring actions, bravery medals continue to have a lot of appeal.

“I believe that this medal set in particular was crucial.

“Norman Scrivener played a crucial part in this operation that aimed to stop the production of the V1 and V2 rockets in order to save British lives and end the war sooner.

“He also flew with Guy Gibson, who four times signed his flying logbook.”

Sq Ldr Scrivener, a native of Birmingham, was a banker until he made the decision to enlist in the military as the Second World War approached.

Even though he had never flown before, he chose the RAF after being turned down by the army and navy.

He was slated to be a navigator since he excelled at arithmetic and geometry.

He first had “severe” air sickness, but it grew better with each trip he took.

He was assigned to RAF Feltwell in Norfolk’s 75 New Zealand Squadron.

He took part in several raids against Berlin and other industrial targets of the enemy.

After that, he flew in further air raids against Germany and Italy with Gibson at 106 Squadron.

“Squadron Leader Scrivener is a navigator of great distinction,” read the citation receiving his DSO. He has participated in a huge number of flights that have included strikes on Berlin, Hamburg, the Ruhr, and many other equally significant objectives for the enemy’s war effort.

“Throughout the operations, he showed incredible tenacity, and the accomplishments he achieved are a superb credit to his exceptional talent.” The greatest admiration is due for his diligent and faithful service.

The lead Lancaster for the Peenemunde raid was flown by Air Commander John Searby, who remembered Norman Scrivener as his navigator. “Norman Scrivener, small of stature and with more than a hundred heavy bomber sorties behind him, had been my Navigator for some time: his role was a vital one for he had to get the aircraft to the target alone and ahead of all the others with precisely five minutes in hand,” Searby said.

Before the main event began, we would need this to finish our survey of the aiming sites.

A total of more than 280 crew members were lost when 44 of the raid’s 600 bombers failed to return.

He has the DSO, DFC, 1939–45 Star, Air Crew Europe Star, Defense Medal, War Medal, and Air Efficiency Award among his collection of medals.