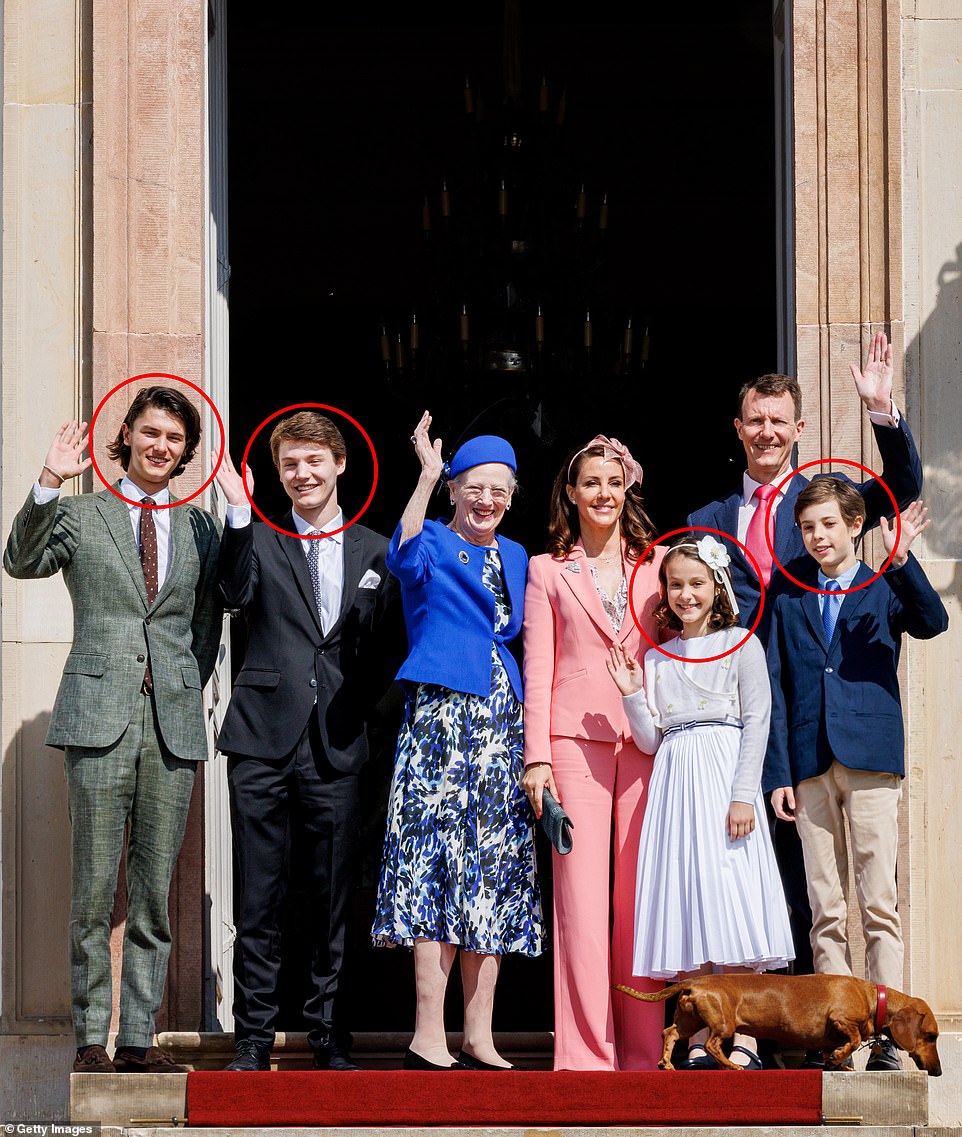 In a move that will put more pressure on Charles III to take “decisive action” against Prince Harry, Meghan Markle, and his other relatives, experts predicted today, the Queen of Denmark revealed that the decision to dethrone relatives of their titles was inspired by other European royals, including her late cousin Queen Elizabeth II.

With the excuse that it is “for their own good,” Queen Margrethe, 82, has stripped four of her eight grandchildren of their princely titles, setting off a furious royal feud with her family reminiscent of Megxit when the Duke and Duchess of Sussex resigned and relocated to California.

The official justification, according to the Danish palace, was to allow her younger son Prince Joachim’s four children, Nikolai, Felix, Henrik, and Athena, to lead more normal lives. This decision followed similar ones made by other European royal families, including the Windsors, to streamline their monarchies.

Her choice has angered Prince Joachim and his four children, who are her son. The two oldest sons of his previous marriage, Nikolai and Felix, have been dubbed “playboy princes” since they are professional models and did not finish their two-year military training because they both felt it was “not suitable for them.”

A year before Megxit, at the end of 2018, the Swedish King made his customary Christmas speech to explain why he decided to deprive five of his grandchildren of their royal titles. This marked the beginning of the streamlining of Europe’s royal family. The number of working royals in the Netherlands has been reduced by King Willem Alexander to only five, along with the number of his residences, servants, limousines, and working heirs.

Even this similarity and trend were addressed in the Danish Crown’s statement, which said that the Queen’s choice is “in line with comparable modifications that other royal families have undertaken in different ways in recent years.”

It is well known that King Charles III has advocated for the House of Windsor to be reduced in size for many years.

Margrethe, who is currently the sole reigning monarch in Europe, will also have observed her cousin Queen Elizabeth II’s tough stance on her son Prince Andrew, who was stripped of all his military distinctions and royal patronage in January due to his connections to Jeffrey Epstein and his multi-million dollar settlement with Epstein’s sex slave, Virginia Roberts Giuffre.

Experts have warned that Margrethe’s action would increase pressure on Charles to expedite his plans, including making a decision quickly on Harry and Meghan’s future and whether Archie and Lilibet should be HRH.

Why is Harry still an HRH? asked former MP Norman Baker, a renowned authority on royal finances, to MailOnline. Charles claims to desire to streamline the monarchy, but this must be sincere and not just pretentious. He has to reduce the expense to the tax payer. Just him, Camilla, William, Kate, and their kids will do. The remainder of them need to collect their P45s and either retire or find work.

The need to trim down the too large British royal family, he said, has long been evident and has only become more so as other European kingdoms, including the Danish one, have done the same to fit in with the 21st century. The fact that minor sidekicks like the Kents and Gloucesters still come with the bundle is becoming more ludicrous.

Tom Bower, an author and investigative journalist who just authored a biography of Meghan Markle, stated: “Charles does need to cut the numbers to defend the monarchy from criticism.” His main challenge is to counteract the Sussexes’ poison, which does pose a danger to his hegemony. The Sussexes’ issue is that their vitriol towards the Royal family in their book and Netflix series is essential to their financial existence. The greatest strategy for Charles would be to threaten to take away their titles if they show disloyalty.

When Margrethe and Charles visited at Buckingham Palace on the night of the Queen’s burial, several people saw how friendly she was toward Charles and wondered whether they had ever considered reducing their royal households.

‘The King, who was seen chatting to Queen Margrethe during his mother’s burial, may be pushed by her to take dramatic action over Harry and Meghan,’ said royal analyst Phil Dampier. On the royal website, the Sussexes have already been downgraded.

But until he learns the details of Harry’s book and Netflix program, both of which seem to be traveling back in time, Charles may be hesitant to make too many choices. The Danish Queen has been forceful, yet polarizing. Charles will want to make choices and absorb lessons, but he can’t put them off indefinitely.

And other royal families will have had an impact on Margrethe II’s choice as well. In 2019, her neighbor King Carl XVI Gustaf of Sweden stated that Princess Madeleine’s children will no longer have the title of HRH, leaving only Crown Princess Victoria and her offspring as the HRHs.

The Dutch royal family has likewise been drastically reduced in size. Prince Constantijn, the brother of King Willem-Alexander, and Princess Laurentien, his wife, are both employed full-time and do not receive any constitutional allowances from the crown as European royal families compete to maintain their standing and relevance.

However, Prince Joachim, 53, who is now wed to Princess Marie, his second wife, told the Danish news organization Ekstra Bladet: “We are all extremely sorry. Witnessing your children suffer damage is never enjoyable. They have been placed in an unfamiliar position. He claimed that the decision hadn’t even been announced to him for five days. The four children of Prince Joachim are Nikolai, Felix, Henrik, and Athena, who range in age from 23 to ten. As of January 1, they will no longer hold those titles.

The government decided in 2016 that only the future king, Prince Christian, would get financing when his siblings reached adulthood. The queen’s other four grandchildren, born to Crown Prince Frederik, 54, would keep their titles.

In Britain, Prince Harry and Meghan Markle continue to be at odds with King Charles and his son Prince William, his successor, particularly over their protection while in the UK and whether or not their children will be Prince and Princess.

The children, who are sixth and seventh in line to the throne after the death of their great-grandmother three weeks ago, now have the right to use the titles prince and princess. However, Buckingham Palace has yet to publicly clarify whether this will take place.

A King Charles representative also said last week that it was “unlikely” that any declaration would be made until at least September 26, when the official period of mourning comes to an end. No announcement has yet been made.

In accordance with regulations established by King George V in 1917 restricting the number of royal family members authorized to claim an HRH title, Archie, 3, and Lilibet, 1, became qualified for the titles upon the death of the Queen.