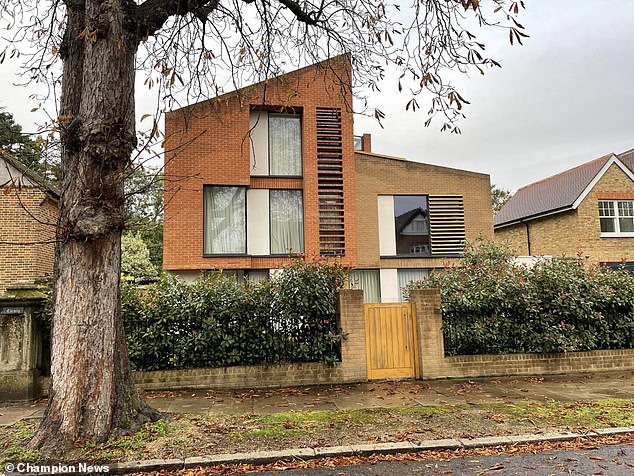 A psychologist who invested £1.2 million in creating an eco-home where she could meditate in privacy is suing, alleging that ‘defects’ including ‘exploding’ glass panels and a green roof she can’t access to water have driven her practically insane.

Brenda Vainker and her attorney husband Francois are suing the architects and builders of their custom-built luxury eco-dream house, saying it is “unfit for habitation.”

According to testimony given at London’s High Court, the couple pictured their affluent Strawberry Hill home as a tranquil haven for themselves and their two adult children, with Mrs. Vainker daydreaming of “an environmentally-friendly, modern house, using modern building techniques for her retirement years.”

According to the couple’s attorneys, Mrs. Vainker made it plain to her architect, Steve Clifton, that the new construction “had to have natural light and room in a quiet and tranquil setting to allow her to practice meditation.”

However, Mrs. Vainker claims that instead of the house of her dreams, she ultimately moved into one that drove her “nearly insane” because of issues such as glass panels surrounding the terrace beginning to ‘explode’ without warning in 2017.

The pair also complains that there is “no secure access” to water their cutting-edge green roof and that it is “airless,” making it difficult for them to sleep there.

They are now suing Marbank Construction Ltd. and SCD Architects for compensation totaling over £1 million.

The assertion is strongly defended by the home builders, who label it ludicrous and doomed to failure.

The 70-year-old Mr. Vainker and his wife ordered the construction of the 5,000 square foot, five-bedroom house in 2013, when they were just about to retire. The property is located in Walpole Gardens, Strawberry Hill, Twickenham, where properties often sell for more than £3 million.

The £1,246,725 concept was intended to be soaked in light and space, with a living green roof made up of herb plug plants. They intended to invest all of their family’s resources in it.

However, their attorney Daniel Crowley said it was “crucial” that the development stay below budget since both the husband and wife were quitting their jobs.

According to the barrister, Mrs. Vainker was clear that their future home needed to be “simple to maintain and fit for the requirements of someone becoming older,” as well as “have natural light and room in a quiet and tranquil atmosphere to allow her to practice meditation.”

But instead of the house of her dreams, Mrs. Vainker ended up relocating into one that allegedly had many flaws and drove her “nearly insane,” including a persistent shortage of air and a glass panel on the balcony of the first floor that allegedly “exploded” without warning in 2017.

“The House has several flaws brought on by Marbank and/or SCD. Their attorney informed the court that the flaws make the home unlivable as a whole.

The couple’s lawyer said that Mrs. Vainker eventually moved out into leased housing due to the stress of their current lifestyle, which forced her to seek counseling to deal with it.

Her lawyer noted the “resulting repercussions on her physical and emotional state” the claimed issues produced, adding that “Mrs. Vainker had contacted a doctor with relation to her worry as to the safety of the residence.”

The pair claims that in addition to having to deal with broken exterior glass panels—which they attribute to the choice of toughened glass rather than laminate—they also experienced disappointment due to the ‘wobbly’ stairway leading from the basement to the second level.

She became more concerned about the possibility of falling one or more stories after learning that the open staircase’s glass balustrades might break if she fell against them since they were not laminated glass.

She was also worried about the unstable, bursting glass panels on the patio of the first story.

The pair is also upset with “stained and mold-covered outdoor Accoya woodwork” and improperly built masonry.

A risk of Legionnaire’s disease is among the other alleged flaws, which also include “repeated leaks and water ingress into the House, holes in render at low level that allow access to water and insects/vermin; no safe access for watering the Bauder Green Roof; no safe access for cleaning the stairwell rooflight,” among others.

The barrister explained to Mrs. Justice Jefford that there was a risk of slipping and falling due to leaky towel radiators and illness from the heated water in the restrooms.

Due to the open layout of the property, Mr. Crowley said, “The staircase and balustrade flaws are hazardous and unsafe, particularly the risk of tumbling down one of the two stairs.”

Mrs. Vainker had never constructed a dwelling home before, thus she was totally dependent on others with more competence and knowledge, such Marbank, SCD, and any other construction specialists who joined the project, stated the lawyer.

According to Mrs. Vainker’s testimony, “I found it extremely stressful to live in a home where I was warned that if an accident occurred, I would be responsible, thus I must not allow a kid or vulnerable adult to go near the glass.”

Because I am a psychologist, I was not scared to seek treatment for myself because I had been driven almost insane.

According to Mr. Vainker, the flaws in the new construction prevented them from using it as a family home or living there for a prolonged amount of time until recently.

The shortage of air had caused his wife to relocate into rental accommodation in September 2015, although she sometimes returned to use the kitchen, which she adored. The court was informed that the airlessness issue had been fixed since then.

The Vainkers are suing Marbank Construction and SCD Architects for negligence and violating the Defective Premises Act, but both businesses are disputing responsibility, according to Mr. Crowley.

The pair claims that the craftsmanship was subpar and that SCD Architects created “defective designs” or improperly evaluated Marbank’s work.

Benjamin Fowler, the attorney for SCD Architects, called the Vainkers’ demand for a green roof “absurd,” noting that they are asking for £32,584 to pay for 50 years of watering and upkeep.

And he continued, saying that because Mrs. Vainker originally complained in 2014 about not being informed that the roof needed to be watered, this portion of their £1 million claim should also be “time-barred.”

However, he went on to say that Mrs. Vainker had actually been informed of the roof’s “maintenance routine” around the time the project was finished.

Likewise, the Vainkers’ argument about the glass panels and balustrades was “certain to fail.”

He said in court that SCD Architects had specifically advised contractors to use laminated glass, and in any case, Marbank afterwards volunteered to repair a large portion of the glass in 2018 at its own expense.

About the allegations made by the Vainkers regarding the Accoya wood, Mr. Fowler cited expert testimony that revealed “no sign of rotting on any portions of the timber.”

Despite Mrs. Vainker’s assertions that the architects failed to provide her with sufficient guidance, he said that she had also been informed on the necessary maintenance schedule for the woodwork.

Both businesses maintain that by rejecting reasonable offers to resolve any issues, the Vainkers have failed to “mitigate their loss.”

The Vainkers are seeking almost £1 million in damages, but Marbank has filed a counterclaim for allegedly unpaid amounts under the terms of the contract.