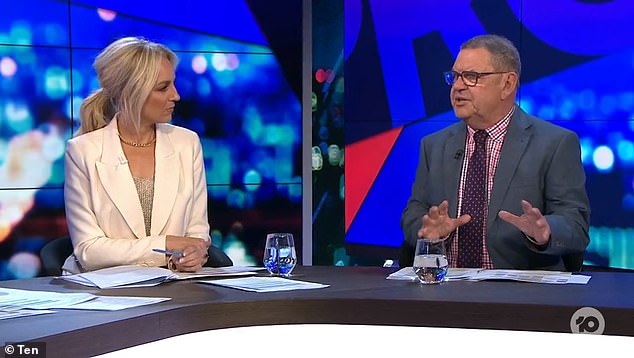 Steve Price has said that forty years ago, while using marijuana, he was detained by the police and accused of narcotics possession.

The shocking information was revealed by the conservative Project panelist as he expressed his opposition to a national Greens campaign to legalize recreational marijuana.

Tim Read, a physician and state Greens MP, is leading the campaign, which also urges the government to decriminalize small amounts of other narcotics.

Price said that he intended to share his account of his detention in order to disprove that he was a “raging hypocrite” for criticizing the Greens’ campaign.

The Project drug shock: Steve Price reveals he was arrested and charged with drug possession

In his Herald-Sun column, he stated, “I hate what drugs do to people, but I would be a raging hypocrite to not admit what had happened in the dim, dark past in my early 20s.”

I imagine there would be a folder with my name on it somewhere in the South Australian police department’s filing cabinet.

Police found Price, who was still employed as a newspaper writer, smoking a joint with two other people inside a vehicle that was registered in his name.

When Price’s car was parked outside a hotel where a business event was taking place, the police found marijuana “in a plastic bag in the glovebox.”

Price was detained, accused of possessing drugs, and had to appear in court in South Australia.

His claim that he was able to “intercept the warrant with the charges and court date sent to my parents’ house” in his Herald-Sun column meant that his mother was unaware of the charges.

Price said that the only punishment he got was a $200. “Can you imagine if I were charged with narcotics today?” He said, “The internet would crash.”

Carrie Bickmore, Price’s co-host on The Project, made the decision to leave the news panel program this week in order to spend more time with her family.

The TV host fought back tears as she admitted to viewers earlier this week that it was the hardest choice she had to make in her career.

Since the start of The Project in 2009, the Gold Logie winner has worked there and has established himself as a known figure on Australian television.

She started out by saying, “I have some news that I wanted to share… s*** I’m already crying.”

I’ve made the difficult decision to stop hosting the program at the end of the calendar year.

“Making this call has been the toughest choice of my professional life, but it’s time for a new challenge and for my next chapter,” the speaker said.

Bickmore said that she will miss her “friends on the desk”—undoubtedly including Price—as well as the “great viewers” who had supported the program for more than ten years.

It’s no secret that she considers the program to be a second home, and she expressed her gratitude to everyone who has been involved, both on and off screen.

It’s been a long road, I know. My son Ollie is now 15 years old, which is remarkable since I began the program when he was one. And I want to stay at home more.

“I want to host more meals for my family.” I’ll have a glass of wine while watching the program at home. I simply wanted to express my sincere gratitude.

It has been a tremendous honor,

Bickmore said that while adoring her “satisfying” profession, she yearned to discover her identity outside of The Project.

She said, “This program is so deeply ingrained in my being that I wouldn’t know who I am without it.”