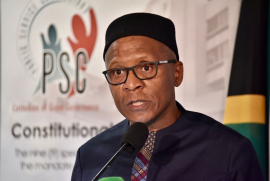 The Public Service Commission (PSC) has called on government accounting officers to impose consequence management on officials who fail to ensure that supplier invoices are paid within the prescribed 30-day period.

“It is crucial for government departments to meet their legal obligations to ensure that the invoices of suppliers are paid within 30 days, as regulated in the Public Finance Management Act,” PSC Commissioner, Anele Gxoyiya said.

Gxoyiya was speaking at the release of the commission’s Quarterly Bulletin, which is titled: ‘The Pulse of the Public Service for the quarterly bulletin covering the period 01 April to 30 June 2022’.

The quarterly bulletin reported on ‘Building an ethical public service: Following the footsteps of Nelson Mandela’; Ethics in Recruitment and Selection Processes in the Public Service; Public participation – A key towards participatory government; Non-payment of government suppliers, and the overall number of complaints and grievances handled by the PSC up to 30 June 2022, amongst others.

Gxoyiya warned that the late payment of suppliers by government departments threatens the sustainability and survival of many small businesses, which will add to the loss of employment.

“The growth and sustainability of the small business sector is regarded as one of the vehicles that can contribute to economic growth and employment, and since government is one of the main procurers of services from small businesses, its commitment must be matched with the timeous payment of invoices.

“Late payments at times affect these small businesses, to such an extent that by the time they get paid, the businesses have already collapsed. The late or no-payment of invoices has a deleterious effect on the financial health of the businesses that then may be forced to borrow in order to stay financially afloat,” Gxoyiya said.

He said the difficult economic climate in South Africa means that borrowing has become costlier and in some cases, cash flow problems will force businesses to reduce operational costs through the retrenchment of staff as a means to forestall business closure.

“Of great concern is the Department of Agriculture, Land Reform and Rural Development, which continuously submitted late for the first two months of the quarter, and did not submit report for June 2022.

“The non-submission of the exception reports by the departments shows disregard for their legal obligations, and the late or non-payment by departments demonstrates little care for the plight of small businesses and their struggles,” Gxoyiya said.

Provincially, the Eastern Cape, Gauteng and North West provinces were in the top three of non-payment of suppliers, as at the end of the first quarter of the 2022/23 financial year.

The Free State did not submit reports for April and June 2022, while Gauteng’s report for May 2022 was also not submitted to National Treasury.

In the PSC’s assessment of the challenges associated with the late payments of invoices, the following areas of concerns were identified:
Systematic challenges;

Incomplete documentation from suppliers to effect payment within 30 days; and
Disputes between government departments and suppliers.

»PSC calls for action against late payment of supplier invoices«