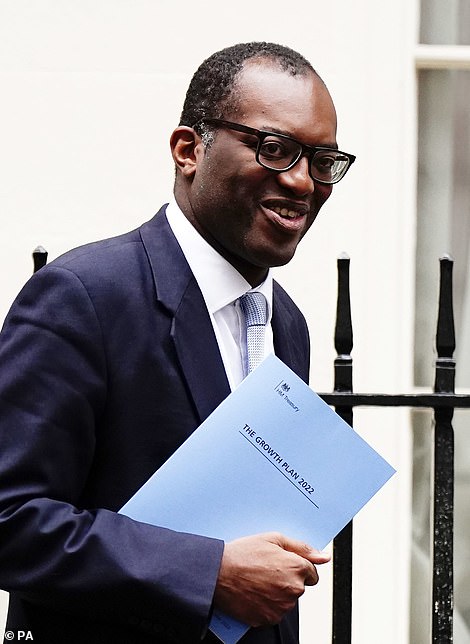 Kwasi Kwarteng has come under fire for “undercutting the UK’s financial institutions,” according to former Bank of England governor Mark Carney, after the chancellor’s “partial budget” sent the pound tumbling this week.

The massive £45 billion in tax cuts promised in the mini-budget on Friday, according to Mr. Carney, came “without the customary forecast attached.” He then cautioned that the British people would be the ones to pay the price.

It happens at a time when some lenders have withdrawn hundreds of mortgage packages out of concern that the Bank of England (BoE) may hike rates even higher, to 6%, to offset the falling value of the pound.

In a startling announcement made yesterday, the institution announced it would purchase long-term government debt in an effort to calm the market turmoil that was threatening to trigger a financial crisis. Mr. Carney argued that this was the proper course of action.

The message of the financial markets is that there is a limit to unfunded spending and unfunded tax cuts in this environment, and the price of those is much higher borrowing costs for the government, mortgage holders and borrowers across the country, Mr. Carney said in an interview with BBC Radio 4’s Today Programme.

Currently serving as the UN Special Envoy on Climate Action and Finance, Mr. Carney charged Liz Truss’s administration of acting against the interests of the nation’s financial institutions and exacerbating the ongoing unrest by failing to provide a comprehensive, costed budget.

Because that is what a budget is, he said, “I don’t see why it sounds weird that you genuinely want to know the numbers in a budget, to understand the projection that is behind those figures, and to then make your own judgments about whether they are credible.”

“And without a doubt, the framework that’s been put in place is vital to have a budget that is predicated on an acceleration of growth subject to an independent and, dare I say, expert review.”

The system, according to Mr. Carney, has been severely damaged, but the BoE’s intervention to calm the markets yesterday was the proper course to take.

He expressed worry that the Treasury had decided to provide an incomplete budget with no figures or predictions at a period of turbulence in the financial system.

The Government, I believe, has acknowledged the necessity for that, but that was crucial, he said. “There was an undermining of some of the institutions that sustain the entire strategy,” he said.

Another problem is negotiating with the bank when it comes to providing short-term economic help.

“The third thing is what’s left out of the budget – the real measures that are going to accelerate growth that’s required for the numbers to add up. This leads to one last uncertainty and concern, which is that maybe the way the numbers will add up is through spending cuts, as yet unspecified – what would those be and how would they be put in place?”

He praised the “strength” of the BoE “during the last few days,” saying that one of the institutions of the UK have traditionally been one of its strengths.

The bank took action, was able to act because it had that framework, and correctly intervened just as the system was about to break down, he said. I believe they made the proper decisions.

In her first public remarks after the mini-budget market turbulence, Prime Minister Liz Truss emphasized this morning that the Government must “take immediate measures to get the economy going.”

The PM said on BBC Radio Leeds in her first public remarks since Mr. Kwarteng’s revelation rocked the financial markets: “We had to take quick action to get our economy expanding, get Britain moving, and also deal with inflation.”

‘Of course, that requires controversial decisions, but as Prime Minister, I am prepared to make those decisions because what is important to me is that we get our economy moving and that we ensure that people can survive this winter. We are ready to take whatever steps are necessary to make that happen.’

Regarding the criticism of the mini-budget, Ms. Truss responded to a question from BBC Radio Norfolk by saying: “As Prime Minister, I have to do what I believe is right for the country and what’s going to help move our country forward.

Of course, there are many people with many different opinions, but what I think nobody is disputing is that we had to take action to deal with what is a very, very difficult economic situation, and this situation has been caused by Putin’s appalling

It’s critical for the UK to be proactive and to use all available levers to promote economic development since this has increased energy costs and we are still dealing with the effects of the Covid issue.

Mr. Philp said to Sky News after the Bank of England intervened to stabilize the markets: “No one’s perfect but I’m not going to apologise for having a strategy to build the economy.”

“I will not apologize for having an energy intervention that is defending every single home in this nation,” he said.

I won’t engage in this post-facto raking over, I say.

Mr. Philp rejected calls that Mr. Kwarteng should step down due to how he handled the mini-budget.

I don’t believe he should, he said. To get our economy booming, the chancellor has outlined his blueprint for growth in great detail. What we need is that.

Speaking to BBC Radio 4 this morning, he also said that the general people “should have confidence that we will overcome obstacles.”

Despite the BoE’s emergency involvement, he steadfastly refused to refer to this week’s events as a “crisis.”

Additionally, he stressed that “iron discipline” would be used to “stay with the present plans” and that Mr. Kwarteng would hold off on releasing the whole budget plans until eight weeks into November.

It occurs as PM Truss prepares to break her morning quiet and ministers are developing measures for massive expenditure cutbacks to convince anxious markets that the state finances are under control.

Following a tumultuous day in which the Bank of England made the shocking and highly unusual decision to declare it would be purchasing gilts in response to the “significant repricing of UK and global financial assets” since Mr. Kwarteng’s mini-Budget announcement on Friday, the UK’s enormous welfare bill is likely to be reduced.

It has come to light that the exceptional action was motivated by concerns that, without extreme measures, institutions would have been destroyed within hours, endangering the whole system.

The £45 billion program, according to City Minister Andrew Griffith, is “the correct approach… to make our economy competitive.”

However, it is believed that Cabinet ministers informally voiced their reservations to Mr. Kwarteng over the tax reduction plan.

The Times quoted a member of Ms. Truss’ new cabinet as saying that the timing of the government’s announcement of the cuts and spending reforms—while inflation is still so high—was incorrect. The official added that the “jury is still out” as to whether the PM can develop a “strong narrative and vision” to sell the measures.

With MPs like former minister Julian Smith and the head of the Northern Ireland select committee both pressing for modifications to the economic strategy, unease is building inside the party.

Downing Street and the Treasury, though, remain resolute and assert that there is no chance of a shift in strategy despite indications of Tory trepidation.

And later this morning, on a number of BBC Local Radio Stations, the Prime Minister will break her quiet.

Earlier, Mr. Griffith had refuted claims that last week’s mini-Budget was to blame for the pound’s decline and the turmoil in the market for UK Government bonds that brought pension funds to the verge of collapse.

The kind of volatility we have witnessed across all developed markets, he remarked, is unprecedented.

To demonstrate to the markets that policymakers are serious about containing the UK’s debt, the Treasury has stated that government departments would be challenged to discover billions of pounds of savings.

There was also talk of the Treasury cutting the UK’s enormous welfare spending in order to save money. Ministers will also expedite “supply side reforms,” which aim to reduce regulation and spur economic development.

The plans to freeze energy costs for homes and businesses accounted for 90% of the cost of previous interventions, according to a Downing Street source who expressed irritation with the market’s response.

The actions came after the Bank of England made an unprecedented intervention to purchase UK government debt “on whatever scale is required” in an effort to calm the markets as market turmoil endangered the viability of final salary pension systems.

It comes as lenders continue to remove offers off the market due to the unstable market, and applicants may need to demonstrate that they can pay interest rates of up to 7% in order to receive a mortgage offer.

Because banks are obligated to determine whether borrowers can pay a mortgage at a percentage point above future forecasts of the rate, the base rate is anticipated to peak at 5.5 percent next spring, having an impact on prospective homeowners.

Borrowers would have to demonstrate that they can afford mortgage rates of 6.5 or 7%.