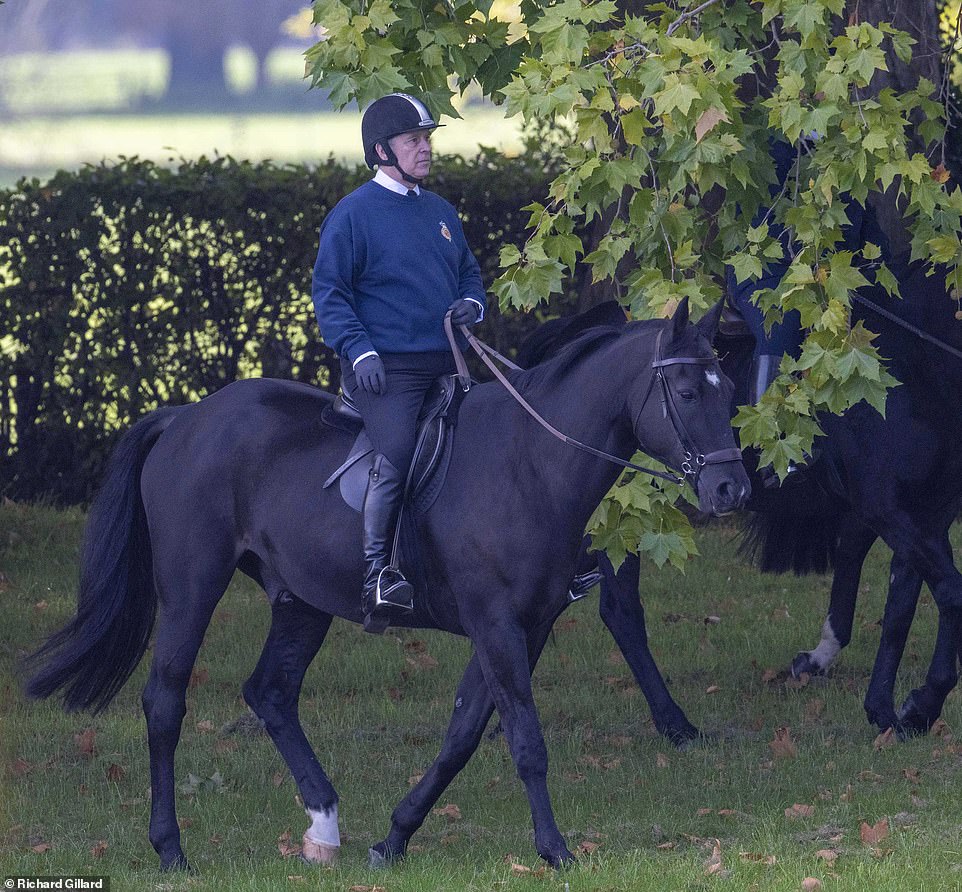 Following the time of grief for the Queen’s passing, Prince Andrew was seen riding along the banks of the River Thames in Windsor today.

The prince, 62, was seen riding close to where the Queen was laid to rest on Monday after her royal burial. He was dressed in riding gear, a blue pullover, and a tie.

After Elizabeth II passed away earlier this month, the Queen’s second son—who had previously stepped back from royal responsibilities after information about his links to child molester Jeffrey Epstein surfaced—returned to public life.

While he and his siblings kept watch next to their mother’s coffin while she lay in state in Westminster Hall, he was momentarily permitted to wear his military uniform.

Soon after Her Majesty’s passing, Prince Andrew also welcomed mourners at Balmoral as they gathered outside the castle where the Queen passed away to offer flowers and pay homage.

In January, Buckingham Palace made the announcement that the Prince will lose all of his military patronage and titles.

It is believed that King Charles had a significant impact on the choice.

Andrew will not resume his royal responsibilities notwithstanding his participation in the Queen’s state burial and period of grief.

According to a source in the palace, the King gave his brother permission to attend the Queen’s vigil wearing his ceremonial military uniform.

According to reports, Andrew’s return to public life has left Jeffrey Epstein’s sex abuse victims “frustrated,” and some have accused him of attempting to “rehabilitate” his reputation.

After news broke of Prince Andrew’s links to Epstein and his disastrous Newsnight interview with Emily Maitlis, Virgina Roberts, who now goes by the married name of Guiffre, threatened to sue him in the US.

The Duke of York faced mounting pressure and negative press as a result of the New York civil sex assault lawsuit, and it was revealed in January 2021 that the Prince would forfeit his royal patronages in order to defend himself against the accusations as a “private person.”

Andrew opted to pay £12 million to settle the case before it went to a jury, despite promising to defend Ms Roberts’ accusations made against him in the civil lawsuit brought in New York and adamantly adclaiming his innocence.

In addition to pledging a “significant gift” to her foundation that supports victims’ rights, Andrew commended her “bravery” and said he had “never meant” to belittle her.

When Philip, Duke of Edinburgh, passed away last year, he last made an appearance in March at a memorial ceremony.

The prince accompanied the Queen from Windsor and helped her to her seat using a walking stick.

At the conclusion of the ceremony, he assisted her in leaving the chapel and into the Royal limousine.

The optics of permitting the duke to walk the 96-year-old queen down to her seat at such a well-publicized ceremony reportedly concerned Prince William and King Charles “on more than one occasion.”

According to The Mirror, the father and son were “totally unanimous” in their belief that his high-profile position was “unnecessary.”

They objected, but The Queen overruled them, declaring that Andrew’s participation in the event was her “desire and final decision.”

However, Andrew was later prohibited from the Buckingham Palace balcony during the festivities for Her Majesty’s Platinum Jubilee, an action that royal experts argued demonstrated the disgraced duke had “no path back.”

Prince Andrew paid homage to the late monarch by saying, “Mummy, your love for a son, your compassion, your care, and your confidence I shall keep forever.”