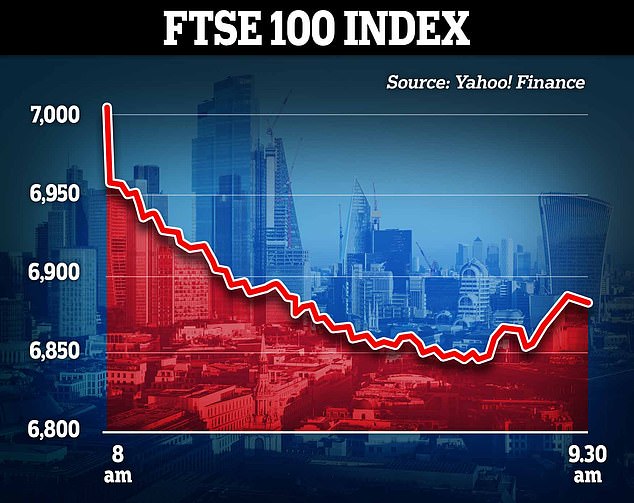 Liz Truss insisted that the mini-Budget was the “right thing” to do despite the financial crisis, and as a result, the pound fell more than one percent against the dollar in early morning trading, reaching as low as $1.0763.

After the Bank of England (BoE) intervened on the bond markets to prevent a new financial catastrophe, buying long-dated government bonds to try to calm the markets, sterling fell on Thursday and the FTSE-100 fell by almost 2%.

Prime Minister Liz Truss broke her silence following nearly a week of turmoil in the financial markets and defended her economic strategy, saying she was prepared to take “controversial” actions to rekindle growth and would not change course.

She told several local BBC radio stations on Thursday morning that the plan they had outlined was the right one.

When asked if she would undo the mini budget’s sizeable tax cuts and government borrowing, Ms. Truss responded, “I don’t accept the premise of the question.”

“These are trying times economically,” I said. I do not dispute this. This is an international issue. But the UK government’s intervention and action at this trying time is exactly right.

As the yield on gilts started to rise once more, the PM declared today that the government needed to take immediate action to spur economic growth in order to defend her tax-cutting budget.

She told local BBC radio that the plan was intended to improve Britain’s trajectory in the long run and that she was ready to make tough choices to support individuals and businesses through what is anticipated to be a very difficult winter.

She claimed that the Bank of England and the government were in close contact.

When asked about the mini-budget in an interview, Ms. Truss responded, “No, it isn’t because…the majority of the package we announced on Friday was the support on energy for individuals and businesses and I think that was absolutely the right thing to do.

She said, “I have to do what I believe is best for the nation,” and that she is willing to make tough choices.

The BoE promised to purchase as many long-dated government bonds, or gilts, as necessary on Wednesday to calm the markets, which have been rocked by worries that last week’s budget would cause debt to skyrocket.

According to MUFG analyst Lee Hardman, the BoE’s action “has undoubtedly escalated the degree of anxiety about the potential negative economic and financial market ramifications from the lack of trust in the UK’s public finances.”

The UK’s recession-threatened economy is expected to benefit from the budget’s significant tax cuts and energy price freeze, but traders were concerned that these measures will wreck the national finances and send bond rates skyrocketing and the pound plummeting to a historic low of $1.0350 on Monday.

The BoE action followed the IMF’s criticism of the most recent budget statement, which it said may aggravate inflation and increase inequality.

When he announced a proposal to slash taxes last week without outlining the effects on the public finances or how the government would change the economy to promote growth, Chancellor of the Exchequer Kwasi Kwarteng triggered chaos in the financial markets.

The BoE had to resume its bond-buying program in an emergency move on Wednesday to support pension funds after the pound fell and government bond rates rose.

According to Ms. Truss, the government must act quickly and decisively to safeguard citizens’ homes and workplaces from rising energy costs.

Naturally, it requires making contentious and challenging judgments. But as prime minister, I’m willing to take it on because I want to see our economy grow.

When confronted with criticism of the “Robin Hood” budget, she said, “It’s not fair to have a recession… It’s unfair that we will have fewer employment in the future due of our high tax load.

Before her public appearances, friends stressed that she had no intention of departing from the economic strategy outlined in Friday’s mini-Budget by Kwasi Kwarteng.

Calls for him to resign or be removed have been made in response to his declaration that he will eliminate the 45p top rate of income tax, reduce other taxes including corporate tax and national insurance, and increase UK borrowing.

However, Ms. Truss is said to have ruled out firing him less than a month after taking the position or making adjustments in light of the financial crisis.