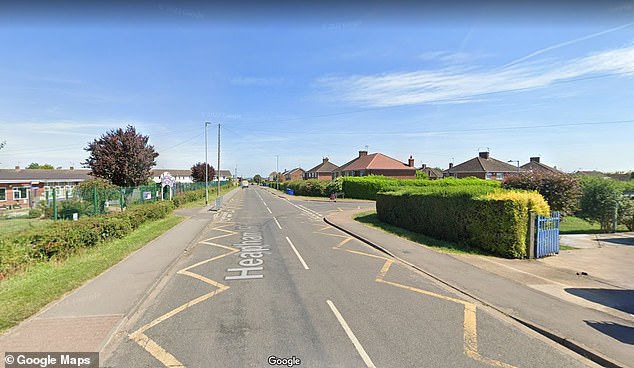 A passenger on a moped threw a microwave through the windshield of another vehicle, injuring the driver.

The cooking appliance was flung at the windshield of the car being driven by the 20-year-old motorist on Gainsborough’s Heapham Road on Saturday night, shattering it and sending glass flying inside.

At about 11:00 p.m., he first observed the two-person moped approaching him without any lights on.

The passenger on the moped threw the microwave at the blue Ford Fiesta as they passed.

Images demonstrate how the microwave became stuck in the window and hurt the driver.

Lincolnshire Police are now looking for the offenders and think they may be responsible for other instances of criminal damage in the town, including reports of goal post and axe damage to cars.

‘We are looking into an allegation of an incident where a microwave was thrown at the windshield of a moving vehicle,’ a Lincolnshire Police spokeswoman said.

“The car’s windshield was broken, and the driver was hurt, but not terribly. A moped with two persons on it was approaching the driver of a blue Ford Fiesta without any lights on.

The back passenger of the scooter is said to have thrown a microwave at the blue car’s windshield as it drove by.

Both last weekend and this weekend, there have been many complaints of criminal damage to vehicles in Gainsborough. We think there may be a connection between the event on Heapham Road and the other complaints of car damage, however we are keeping an open mind.

We have received allegations of vehicle damage on Corringham Road, Garfield Street, and Forster Street, where witnesses have reported seeing a rider and passenger on a moped damaging cars with a weapon thought to be an axe and objects described as a goal post.

“We are taking these offenses seriously,” said Superintendent Phil Baker. “Our police, including extra officers, are working hard to find individuals responsible.”

All of these occurrences are quite severe, and it is especially worrying when a microwave is thrown at a vehicle. We need the community’s assistance in coming forward and sharing their knowledge with us. There will be those in charge who are aware.

This time, no one was gravely hurt, so we want to find the culprit. I’m asking the neighborhood to get in touch with us. You may do this directly or anonymously via the independent charity Crimestoppers.

Call 101 or send an email to force.control@lincs.police.uk with the subject line “reference incident 124 of October 16” if you have any information.

Alternatives include going online to crimestoppers-uk.org or calling the independent organization Crimestoppers anonymously at 0800 555 111.