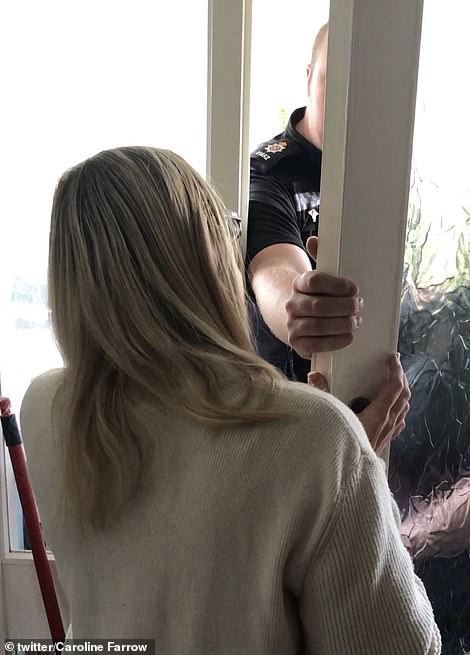 After police came on her house due to a string of’malicious’ internet remarks, a gender-critical Catholic woman was detained in her home in front of her children and had her body checked.

Mother-of-five Caroline Farrow, the wife of a vicar, wrote a long thread on Twitter about her interaction with Surrey Police after two officers allegedly “forced” their way into her house to make an arrest on Monday night.

Two police officers allegedly requested she attend them for an interview while under oath while she was in the midst of cooking a roast dinner for her priest husband Robin and their five children on Sunday.

Ms. Farrow reported that when she inquired for a warrant, they allegedly responded, “We don’t need one.”

Images show her being searched outdoors while another one shows one cop attempting to put his hand on the front door to prevent her from shutting it.

The argument started in June when a number of anonymous messages were made on the forums of the website Kiwi Farms. Mrs. Farrow is charged with using the internet platform to harass other users and upload “malicious” information.

According to a Surrey Police spokeswoman, police investigated “allegations of harmful communications and harassment” when they went to the Guildford house, and they “seized a number of electronic devices.”

The devices were confiscated, according to temporary Detective Chief Inspector David Bentley, while police “continue to collect additional evidence and conduct an investigation to verify or deny the claim.”

Mrs. Farrow has vehemently refuted the allegations, stating that the times the postings were made were when she was playing the organ during Mass at the Holy Angels Church in Aldershot.

She had previously been the focus of a five-month police investigation after allegations that she had referred to a transgender woman on Twitter as a “he.”

Last night, Mrs. Farrow told GB News that she had been detained “for what was a Twitter dispute over gender problems.”

She described how the cops seized computer equipment, some of which were in her husband’s parish office next door and were used by her autistic son for home education.

Mrs. Farrow described how she was taken outside and searched before being driven to a police station and detained there for a number of hours.

The next thing she knew, she was having her socks examined for narcotics while she was preparing supper for her children. An full shift was spent on this. What a waste of the police department’s time.

I was then handed other materials that the police claimed I had sent. They were not any of my doing.

Early on Monday morning, Mrs. Farrow was freed with conditions.

Later, Mrs. Farrow tweeted pictures that seemed to show her being frisked by police in her driveway. She also claimed that her personal gadgets had been taken away and that she had to give over her jewelry before being questioned in a Guildford police station.

When informed of her rights and informed that her comments may be used against her, she tweeted, “I answered that ladies don’t have a [aubergine emoji, which is often used online to allude to a penis].”

The whole event, according to Farrow, who works as the UK and Ireland head of the Catholic advocacy website CitizenGo, made her feel “harassed and frightened.”

In response to “insulting messages on the internet,” she tweeted: “I realize it’s protocol, but one minute I’m preparing some roast chicken for supper, and the next I’m having my socks inspected for narcotics.”

It’s unsettling that the cops may just come and arrest you on someone else’s word. They could only utter the phrase “we have an accusation that needs to be examined.”

Under the Malicious Communications Act, convictions may result in sentences of up to two years.

J.K. Rowling has already shown her public support for Mrs. Farrow, who allegedly claimed that mad trans rights campaigners had invaded and taken over her life.

The same police department looked into Mrs. Farrow in 2019 after claims that she had used the incorrect pronoun to refer to a transgender lady.

Susie Green, the leader of the transgender children’s charity Mermaids, and the Catholic activist, who is well-known for her staunchly held religious beliefs, argued on ITV’s Good Morning Britain about whether Girl Guides should let children who have changed their gender join the organization.

Later, on Twitter, Mrs. Farrow referred to Jackie Green of Ms Green as “he” rather than “her” and said that Mermaids encouraged child abuse. Ms. Green filed a police report complaint five weeks later.

According to one of Mrs. Farrow’s tweets, “What she did to her own kid [the youngest transgender surgery patient in the world] is unlawful.” He was castrated and made impotent while still a kid, which is considered to be mutilation.

The four-month Surrey Police investigation into Mrs. Farrow was abruptly ended as it was heading into a full-blown disaster and caused much controversy when it was made public.

According to a Surrey Police spokeswoman, on Monday, October 3, police were called to an address in the Guildford neighborhood as part of a probe into claims of harassment and malicious communications (the transmission of explicit or egregiously offensive messages, threats, or information).

An individual, 48, was detained on suspicion of both offenses.

Several electronic devices were taken from this location in accordance with section 19 of PACE as prospective evidence. Electronic devices, for instance, may store a vital piece of evidence in cases where an offense is believed to have been committed on them and are often taken during an inquiry.

The lady was brought to Guildford Police Station, where she underwent questioning. She has now been freed while the inquiry is still continuing.

‘There is much discussion on social media about the apparent circumstances underlying this inquiry,’ temporary detective chief inspector David Bentley said.

“It is crucial that we do not pre-empt or prejudice any future proceedings at any level,” the statement reads. “We do not have the flexibility to discuss every step of our investigations or the particulars of an accusation on social media.

“It is our responsibility to evaluate an accusation of a crime combined with any relevant evidence to determine if an offense has been committed, in this case one where a highly offensive statement is alleged to have been sent.

“If it has, we collect more proof and conduct an inquiry to support or refute the claim.” In this scenario, the exact same procedure is being used.

“These claims are the subject of an active investigation, and pertinent enquiries are being made.”

We have a responsibility to safeguard an investigation’s integrity, so we won’t be offering a constant commentary on this case.