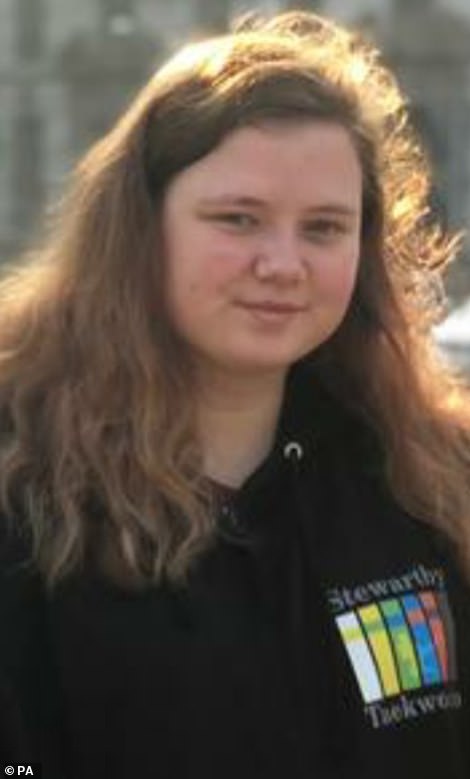 After discovering a backpack thought to belong to missing adolescent Leah Croucher, who went in Milton Keynes more than three and a half years ago, police have opened a murder inquiry.

Leah, 19, was last saw in Milton Keynes on February 15, 2019, as she made her way to work on foot. After she failed to come home, her parents John and Claire filed a missing person’s report.

Thames Valley Police have searched more than 4,000 residences over the years in an effort to trace the adolescent.

Officers have been searching a four-bedroom detached house on Loxbeare Drive in the city’s Furzton neighborhood since Monday.

According to a Thames Valley Police spokeswoman, “specialist police and forensic teams visited the address on Tuesday as a result of information received from a member of the public on Monday about a property in Loxbeare Drive, Furzton, Milton Keynes.”

Several things have been found as a consequence of an ongoing thorough forensic investigation of the premises.

Leah Croucher, who was reported missing on February 15, 2019, had things, including a backpack and personal belongings, discovered during the search.

The Thames Valley Police have now opened a murder inquiry as a consequence of our discoveries.

We have been at this complicated and difficult situation since just after 6.30 p.m. on Monday.

We will be on the scene for a significant amount of time.

“Over the last three and a half years, a comprehensive missing person investigation has been underway, including intensive searches and house-to-house inquiries.”

Detective Chief Superintendent Ian Hunter, head of crime for Thames Valley Police, stated: “We responded to a complaint on Monday and found items of concern within the premises.

We are working with a very challenging scene, but we can now report that we have found many things that are connected to Leah, and as a result, we have now started a murder investigation, lead by our Major Crime Unit.

Leah’s family has been kept informed and is still receiving help from the police. As this inquiry is still in its early stages, we ask the public and the media to keep Leah’s family in mind and refrain from making any additional assumptions.

When we are able, we will provide you further updates.

While this investigation is ongoing, a scene-watch is still in place at the location. We are dedicated to making sure that our investigations at the site are comprehensive.

“Over the past three and a half years, we have dedicated hundreds of officers and personnel to the hunt for Leah. We have reviewed 1,200 hours of CCTV, made more than 4,000 house-to-house enquiries, and offered various incentives for information that will help us find Leah.

The first time we were made aware of this location was by a call from a member of the public on Monday, and we appreciate them getting in touch with us right away to let us know about their worries.

“Leah’s family and friends remain in our thoughts, and we will continue to provide them with all the assistance they need,” the statement reads.

She was on her way to work in the morning when she “essentially disappeared into thin air” while going in the area of Loxbeare Drive and Chaffron Way.

She has not been located, and no one has been detained in connection with the crime, despite a thorough investigation that included police visiting 4,000 residences, sending divers into Furzton Lake, and reviewing 1,200 hours of CCTV.

In the past, police have described the case as “bewildering and aggravating,” and although they still have a “open mind,” they have said that “the possibility that Leah is no longer alive has to rise.”

On February 15, 2019, Leah’s family reported her missing from Emerson Valley, Milton Keynes. She was 19 years old at the time of her disappearance. They last saw her on February 14—Valentine’s Day—at 10 p.m.

On the morning of February 15, she was last spotted on surveillance footage traveling along Buzzacott Lane in Furzton before she “essentially disappeared into thin air.” Just after 8:30 am that morning was the last time she had used her phone.

Leah’s family released a tearful message in February to commemorate the third anniversary of her abduction.

Leah’s family claimed in a written statement sent to Thames Valley Police that while each day “feels like an eternity of anguish and despair,” they were still optimistic that she will one day be located.

According to her parents John and Claire Croucher, “it is tougher every day to persuade ourselves that today will be the day that we receive answers, today we find out what occurred three years ago.”

It is impossible to persuade ourselves that this is not a self-delusion we tell ourselves to get ourselves out of bed every morning. Every day is agony.

It is impossible to live without worrying at least once a minute, every single day. Every night, it seems like sleep eludes us, and when we awaken each morning, we never feel rested and renewed.

“Our hearts still jump in our chests every time the phone rings or someone knocks on the door.”

“That recognizable rush of optimism rising in our throats.” the recurring tide of sadness that sweeps over our innermost spirits

Neither the police nor Leah are at the door or on the phone, she said.

“Once again, we need the public’s assistance. You all have been so fantastic so far, continuing to assist us in checking every street face for Leah, posting on social media, and alerting authorities to any sightings.

Leah left her Milton Keynes home between 6 and 7:15 the night before she vanished. She informed Claire Croucher, her mother, that she was seeing a friend.

Police discovered that she had never seen the buddy, and they had no idea where she went, who she was with, or if she had seen anybody that evening.

Her mother Claire earlier said that it was “the last time I got to say goodnight” when her parents last saw her before she went to bed.

In the past, Leah’s parents, Claire and John Croucher, expressed concern that she may have been stolen since they couldn’t understand why she would “simply leave.”

Officers have searched more than 4,000 properties in Milton Keynes in their hunt for Leah, and they have also used drones, helicopters, and specialized search teams.

Police claim they have searched all of the town’s lakes using marine units and dive teams, but no items connected to the missing lady have been discovered.

Since Leah vanished, her family has maintained public awareness of her disappearance by running informational campaigns.

We are still wholly dedicated to locating Leah and finding out the truth for her family, DCI Howard said in April.

The next month, digital billboards all across London displayed a plea for information on Leah’s whereabouts.

Leah’s family also endured the devastating loss of her brother Haydon, who was discovered hung in November 2019, in addition to the trauma of Leah’s abduction.

The 24-year-old hung himself after admitting to a counsellor that he was having trouble dealing with the absence of his sister.

Haydon’s therapist Chantelle Tillison took him to Milton Keynes Hospital so that he could be evaluated for admission. However, he was sent home since there were no beds available.

Nine months after Leah vanished, his mother Tracey Furness and sister Jade discovered him hanging at his apartment in Bletchley, Milton Keynes.

He was taken to the hospital and eventually died on November 16, 2018, according to information presented during a Milton Keynes coroner’s court hearing in 2020.

His mother Claire said there was “still a lot to learn” from her son’s death during the inquest.

The family believes the Central and North West London NHS Foundation Trust still has a lot to learn from the unnecessary deaths of Haydon and others before him, Mrs. Furness said in a statement released via her attorneys in 2020.

In the meanwhile, Leah’s sister Jade Croucher made a plea for her to return home in July 2019, four months after she vanished.

It would be wonderful if she messaged me on her birthday, she remarked.

“Every day I get out of bed hoping we’ll make some progress toward learning Leah is okay.

I’m often checking my phone, but nothing has come through so far.

Visit a local Samaritans branch or phone the Samaritans on 116 123 for confidential help. For further information, go to www.samaritans.org.