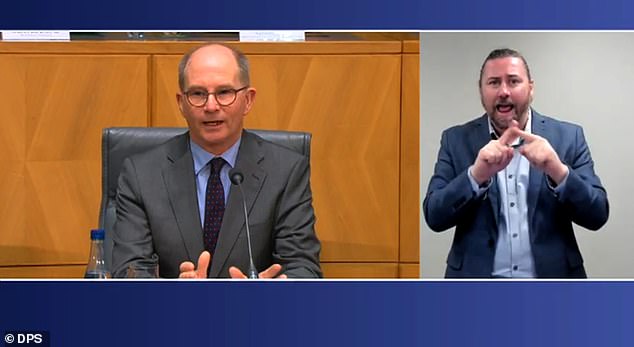 Despite the elimination of the countrywide need for enforced isolation, Australia’s top doctor advises anyone infected with COVID-19 not to report to work while they are still experiencing symptoms.

Aged care and hospital employees affected by Covid will still be subject to isolation requirements, but most Australians will now have to make their own decisions over how long to take off from work.

Reporter Mark Riley of Seven News noted at a news conference that the removal of the isolation regulations left Australians in the dark about how long they needed to take off from work.

Five days, seven days, three days, or one day? How long can they remain away for now?

The Chief Medical Officer, Paul Kelly, advised employers to continue treating Covid-19 the same way they have for the last 2.5 years.

Professor Kelly referred to a letter he addressed to Mr. Albanese in which he said that he strongly advised Australians with respiratory illnesses, especially those who had been diagnosed with COVID, to remain at home and to avoid high-risk environments while they were symptomatic.

The infectiousness of this virus hasn’t altered, he told reporters in Canberra. We are aware that the peak infectious time lasts, on average, two to three days.

Once again, it stands to reason that somebody exhibiting symptoms is more likely to be contagious.

Dr. Kelly said that the government would not stop contagious individuals from “getting out into (the) society presently.” We won’t be in the future, either.

The occupational components in those very high-risk contexts will continue to be a topic of conversation with employers.

Covid should be seen in the same way since “work health and safety components apply for all forms of infectious disorders.”

The UK and Switzerland are two other countries that have abandoned Covid isolation policies, and Australia is the newest to do so.

Anthony Albanese, the prime minister, said that “we want to have actions that are proportional and targeted.”

On the same day, compensation for pandemic catastrophe leave will also be eliminated, with the exception of those who live in “high risk locations.”

According to Mr. Albanese, “We want to continue to promote immunizations as very vital, including individuals receiving booster injections.”

And we want a policy that lessens dependency on government intervention and fosters resilience and capacity-building.

Professor Paul Kelly cautioned that eliminating the isolation requirements does not mean the outbreak was “over.”

It acknowledges that the epidemic is now in its very low transmission – community transmission phase here in Australia, the man added.

It does not imply in any way that the epidemic is over.

As we did earlier in the year, there will probably definitely be more viral peaks in the future.

But for now, according to our weekly open report, “we have extremely low rates of both cases and hospitalizations, admissions to critical care, outbreaks in aged-care facilities, and several other metrics.”

Concerns that eliminating the isolation requirements and pandemic catastrophe compensation might induce infected employees to return to work were dispelled by Mr. Albanese.

In his opinion, it is time to abandon the idea of Covid exceptionalism and start considering what can be done to keep people safe from respiratory illnesses.

The modification comes in response to NSW Premier Dominic Perrottet’s call to do away with the ingrained regulations.

Australians are now required to isolate for five days in all states and territories if they test positive for Covid-19.

As a nation, “we need to get to a place where if you’re ill you remain at home and if you’re healthy you go out and about and enjoy life,” said Mr. Perrottet.

We also need to reach a point where people watch out for one another, take care of one another, and ensure that if you’re unwell, you remain at home even if a public health order isn’t in effect.

“I believe those who are advocating for the isolation times to be decreased are not scientifically educated and they need to realize that,” said Dr. Robson.

“We’re witnessing a significant increase in COVID instances once again.” As the Christmas season approaches, more individuals will be traveling internationally.

We urge prudence because we need to preserve the health system at this time of high danger.

According to Victorian Premier Daniel Andrews, COVID must be recognized as a virus and managed similarly to other respiratory conditions.

ACT Chief Minister Andrew Barr said that even though the number of cases was decreasing, vigilance was still required.

It’s doubtful there will ever be a better moment than now as summer approaches, he told reporters, adding that there are now few cases, few hospitalizations, and minimal levels of community transmission.

But you must also be aware of potential future events.