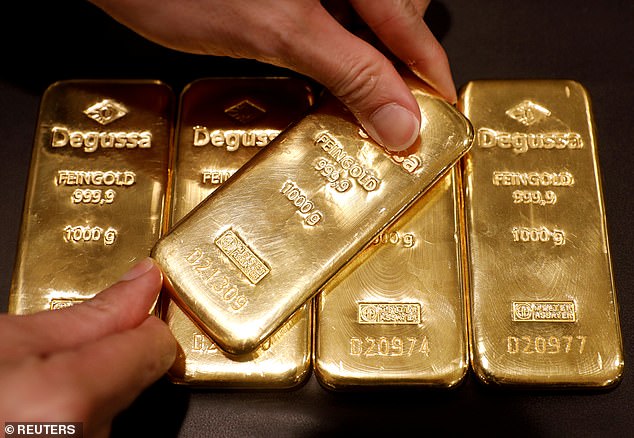 Even with increasing interest rates, Australians may still earn money, and it needn’t merely come from placing money in a bank savings account that offers better returns.

The share market has declined from its high over the last year due to the greatest inflation in more than three decades and the sixth consecutive monthly interest rate increase in October.

The issue is not limited to Australia, as even higher interest rates in the United States are anticipated to potentially trigger a recession in the largest economy in the world.

Due to the decreased risk appetite caused by the uncertainty in the world, investors are looking for assets that do well during times of financial market volatility rather than large profits.

Although some Australian banks provide savings rates of 4%, when investors are uneasy, the US dollar and gold are seen as safe bets.

The decision to acquire shares after a double-digit decline from its top last year also needs to be made.

The US dollar is regarded as a safe haven investment under these circumstances.

This is in spite of Citigroup analysts’ Wednesday night claim that the aggressive US Federal Reserve interest rate rises were to blame for the American stock market currently pricing in a recession.

Shane Oliver, head of investment strategy and chief economist at AMP Capital, said that the American dollar has a track of of doing well in times of investor trepidation, such as the Global Financial Crisis.

He told Daily Mail Australia that “the US is still recognized as a dependable reserve currency.”

It has a history of rising anytime there is a sense of uncertainty.

“Share markets have typically declined as the US dollar has increased, and it is likely that this trend will continue if there is more unrest.”

Since the US dollar is also the currency of the largest economy in the world, investors do not anticipate an American government debt default.

Many hazardous nations still see the US dollar as hard money, and a significant amount of debt is denominated in US currency, according to Dr. Oliver. “Most central banks still have it in their reserves,” he said.

The Australian dollar, which is linked to the fortunes of commodities prices – barometers of global economic attitude – has fallen below 65 US cents as a result of the rising of the American dollar.

The Aussie dollar tends to decline anytime there is uncertainty about the future, he added. “The conventional view is that the Aussie dollar is a growth currency, so it benefits when there is high demand for commodities like iron ore, energy, and so on,” he said.

In spite of coal hitting a record high price of $US450 a tonne last month, the Australian dollar has maintained a good position versus the British pound sterling, the euro, and the Japanese yen.

Although we have declined versus the US dollar, the declines haven’t been significant relative to the other currencies, according to Dr. Oliver.

We haven’t decreased as much as usual since a number of our major exports, especially coal and gas, continue to trade at record high prices.

According to statistics from The Perth Mint, the current price of an ounce of gold has increased to a four-month high of $2,658.

Since November, when it was selling at $2,405, it has increased by 10.5%. This increase coincided with the stock market’s decline from its top in August 2021.

According to Dr. Oliver, gold was seen as a secure store of wealth at a period of decreased risk appetite.

It’s difficult to make any sense there, yet gold is seen as a store of wealth, he added.

It’s not as if folks will produce a lot of additional goods out of gold during unrest.

People often turn to gold as a kind of safe haven when they are feeling apprehensive about things since it has value that goes beyond its function in industry.

Since the Reserve Bank of Australia raised the cash rate in May for the first time since November 2010, ending the period of the record-low 0.1 percent cash rate, the banks have raised their savings rates.

Rates increased in October for the sixth month in a row, reaching a nine-year high of 2.6%.

Starting Thursday, ING said that on October 11 for balances up to $100,000, it will raise the popular Savings Maximiser account’s rate by 0.45 percentage points to 4.05 percent.

This rate has increased three times over the last six months.

The only banks now providing savings rates of more than 4% are the Bank of Queensland and Macquarie, according to RateCity research director Sally Tindall, who predicted that the banks will likely follow ING’s decision.

With the announcement of an attractive 4.05 percent continuing rate, ING has sent a challenge to the other market leaders in the savings industry, she said.

“This new rate will put ING ahead of the competition, but other market leaders are expected to pursue them down,” the statement said.

Dr. Oliver said that despite this, the stock market was still worthwhile to investigate since dividends paid to shareholders often outperformed bank interest.

You might argue that shares are less expensive now than they were a year ago due to their decline, he added.

Since the share price is lower and the dividend yield is greater now than it was a year ago, you might claim that the stock market offers superior value provided you don’t mind some volatility since shares may potentially decline further.

The average two percent annual interest on a bank term deposit is double by a fully franked dividend yield, after tax, of six percent.

Markets anticipate that the US Federal Reserve will keep increasing its target interest rate, which is now at a 14-year high of 3 to 3.25 percent.

Although investors used to see government bonds as a safe haven asset, their value has decreased due to increasing interest rates.

Unless yearly returns, also known as yields, are greater than the country’s target interest rate, assets having a fixed maturity date years in the future are seen as less desirable investments.

Even at a period of economic crisis when share demand is low, the more a government bond yields, the less popular it becomes.

Australia’s inflation rate increased by 7% in the year to July, which is the highest level since December 1990 and far higher than the Reserve Bank’s goal range of two to three%.

Despite a six-month lowering of fuel tax to 22.1 cents per litre, fruit and vegetable prices rose by 18.6% and gasoline costs by 15% in August, even though the inflation rate slowed to 6.8%.

With Australia buying products from China worth $10.6 billion in August, covid-zero supply restrictions in China are also driving up prices.

Australian trade surplus decreased to $8.3 billion in August, less than half of the previous high of $17.5 billion set in June.

Australia runs the danger of seeing a slowdown in export revenues, according to Dr. Oliver.

In the month, overall imports climbed by 4.5% while export growth was just 2.6%.

Additionally, foreign travel, which is categorized as an import, increased by 1.2% according to statistics from the Australian Bureau of Statistics.

The domestic economy is also seeing solid consumer spending, with retail sales up 0.6% in August, marking the eighth consecutive month of growth.

However, spending at cafés and restaurants increased by 1.3% in the month.

The Commonwealth Bank, the largest home lender in Australia, has made available updated credit and debit card information from its clients, indicating that “spending was robust in September.”

Harry Ottley, an economist, claimed that despite the worst inflation in 32 years reducing the purchasing power of wages, the Reserve Bank of Australia’s escalating interest rates since May have so far failed to discourage consumers from making purchases.

While spending growth has leveled off, consumers have not yet tightened their budgets to the extent that was anticipated by this stage of the RBA interest rate tightening cycle, he said.

The Reserve Bank predicts that inflation will reach a 32-year high of 7.75 percent in 2022, which will lead to more interest rate increases and an issue that is not unique to Australia.

»Not only savers may profit from higher interest rates«