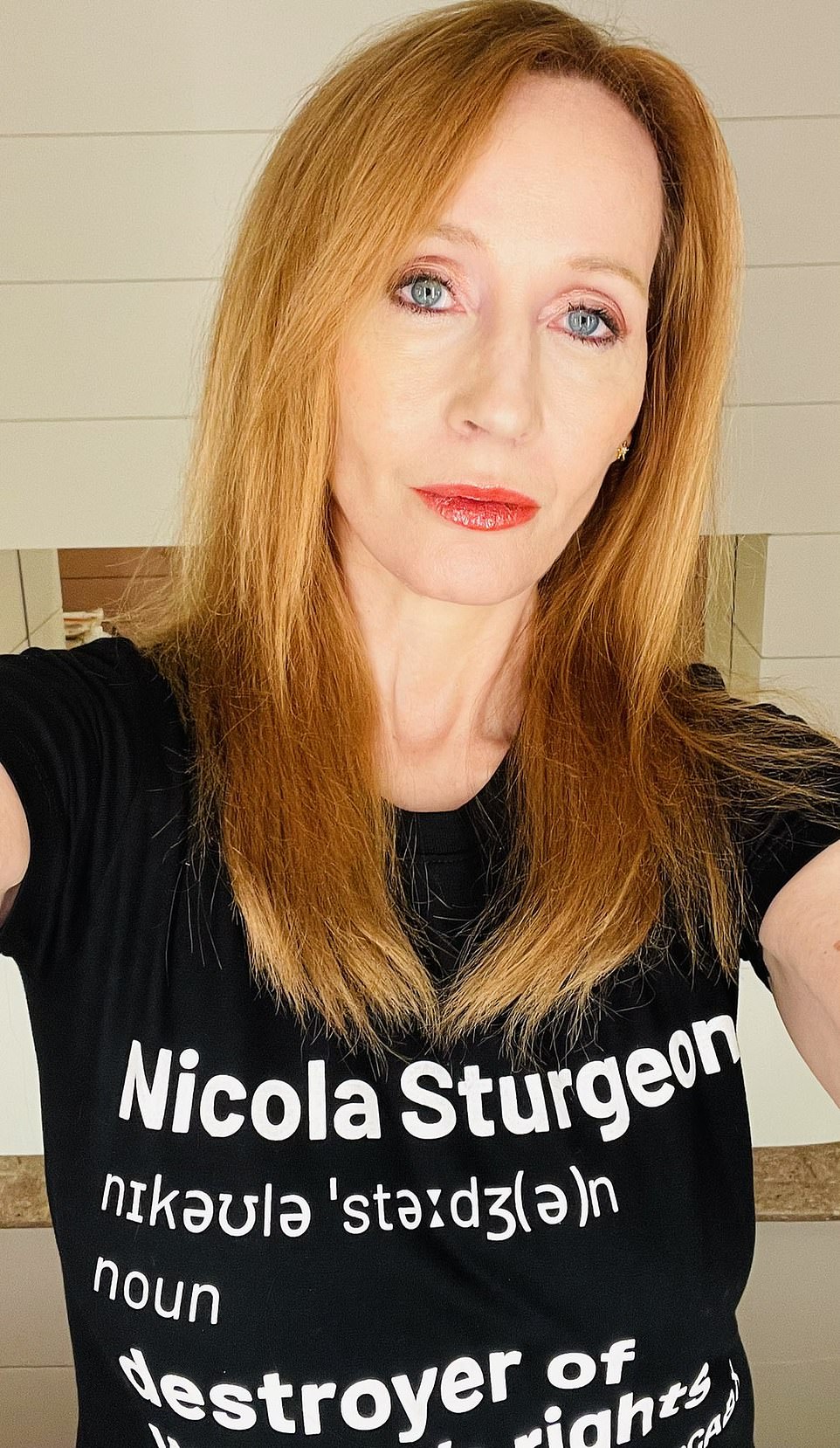 After JK Rowling called the SNP leader a “destroyer of women’s rights,” Nicola Sturgeon escalated their argument by saying that the author is not a “genuine feminist” and that she is.

After being attacked by the celebrity, the First Minister responded by saying, “I’ve spent my whole life advocating for women’s rights, and I’m a devoted feminist with plenty of proof behind that.”

She also said: “There are not shortages of attacks on women that feminists, real feminists, as I consider myself to be, should be focusing on right now,” and accused them of attempting to “stigmatize and discriminate” against transgender people. This was a thinly veiled jab at Ms. Rowling’s feminist credentials.

In a t-shirt worn yesterday, Ms. Rowling called Nicola Sturgeon a “destroyer of women’s rights.” She did so as she offered her support to activists who had assembled outside the Scottish parliament to voice their opposition to the contentious gender legislation implemented by the devolved administration.

The Gender Recognition Reform (Scotland) Bill proposes to make sex changes faster and simpler for people as young as 16 without the need for documentation from a doctor.

Campaigners have argued that the shift to self-identification and the elimination of medical verification for gender recognition certificates would put women in single-sex environments at danger.

On the BBC Radio 4 Today program, the First Minister was challenged directly about J.K. Rowling’s t-shirt and dismissed her detractors, saying: “Abusive males are a danger to women – that is what we should be focussing on.”

“We shouldn’t be attempting to further marginalize and discriminate against a very small minority in society that is already among the most demonized.”

The loss of abortion and reproductive rights, as well as the struggles faced by women in Iran and other Muslim nations, are only a few of the many genuine challenges facing women today.

We should be concentrating on the fact that abusive males and legislators who seek to limit our rights are the real threats to women in our society today, not trans women.

However, hundreds of women rallied outside the Scottish Parliament to protest the amendments, waving banners that outlined the concept of a biological woman and accused the First Minister of seeking to weaken rights.

Miss Rowling, 57, shared a photo of herself on Twitter wearing a t-shirt with the words “Nicola Sturgeon – Destroyer of women’s rights” before the protest.

I stand in solidarity with @ForWomenScot and all women demonstrating and speaking outside the Scottish parliament. #NoToSelfID, added Ms. Rowling, who has received death threats from trans activists.

Numerous demonstrators at the For Women Scotland (FWS) demonstration also donned the t-shirt that led to the removal of an activist from a parliamentary committee in June when a minister was testifying.

A watchdog warned this week that enabling individuals to self-identify might lead to “confusion” regarding their status in other regions of the UK. The proposals have come under fire in recent months.

As a committee meeting on the subject was conducted this morning, FWS leaders urged activists to “come, contribute your voice and convey a message that women count.”

I stand in solidarity with @ForWomenScot and all women speaking up and demonstrating outside the Scottish parliament, she tweeted. #NoToSelfID’.

When questioned about the tweet by media, a spokeswoman for the Scottish Government claimed not to have seen it.

According to FWS, it works to advance the rights of women, children, and the LGBT community. It also seeks to “protect’sex’ in law and policy,” “help people speak out,” and “encourage evidence-based dialogue.”

We think that there are only two sexes and that a person’s sex cannot be altered, according to a statement on the organization’s website. Women have a right to dignity, safety, and justice.

Johann Lamont, a former Scottish Labour leader, and Maya Forstater, a Sex Matters spokesperson, both spoke at the event today.

The Scottish Parliament, according to Ms. Lamont, “was a Parliament where policy, where action, and where legislation were moulded by an awareness of what generated division and inequality” when it was first established.

The committees, she said, had a special responsibility because they would break down the Parliament’s protective walls and enable the Scots to take part in the future.

That has not taken place.

It is not their responsibility to choose who they will talk to and listen to before the committee meeting and to just pay attention to those who already share their opinions.

The committee does not have to agree with everything we say, I’m not suggesting. But they need to pay attention, ask questions, engage in debate, and go further.

They shouldn’t fire anybody because, in the realm of firing people, you kill the messenger. You ignore the warning, you pass poor legislation, and other people suffer the consequences.

“Therefore, I challenge my friends and all of the others here who have the honor of serving as members.” Your duty as legislators is to comprehend the laws of unintended consequences in addition to passing legislation that you believe to be fair.

Ms. Lamont said that she is “aware” of the significance of women’s rights.

“I was warned 40 years ago by young men: “Now is not the time,” she told the throng. Other campaigns are significant. There are some who are more defenseless.

“I stated then, and it is still true now, that if you don’t address women’s inequity we will never have genuine equality.”

We think these significant revisions would enhance the lives and experiences of trans persons, said committee chair Joe FitzPatrick.

According to documents submitted with the bill by the Scottish Government, the number of persons asking for a Gender Recognition Certificate (GRC) might rise from 30 per year to 250–300 as a consequence of the revisions.

The measure was supported by five MSPs on the committee, but Pam Gosal and Rachael Hamilton, two Conservatives, were against it.

The Bill reduces the age from 18 to 16 and outlines efforts to shorten the application process for a GRC.

There would be no longer be a need for a medical diagnosis of gender dysphoria, eliminating the need for physician reports.

A three-month “reflection period” would be added to the procedure, but the amount of time someone must have lived with their “acquired gender” before applying would be decreased from two years to three months under the law.

In a recent Scottish Government survey, it was shown that 60% of participants supported switching to a self-declaration system.

Because they “believe that trans persons know their own thoughts,” the majority of MSPs on the committee supported doing away with the need for any medical documentation or diagnosis.

But other committee members were “concerned that the elimination of the need for gender dysphoria and the necessity for medical proof may open the GRC procedure to a broader and more diversified group of persons,” according to the committee report.

That “may possibly imply the procedure is subject to misuse by bad faith actors, notably predatory males,” is what they worry.

Concerns have also been expressed regarding how the revisions may affect single-sex areas for women and girls, such as restrooms or locker rooms that are just for females.

According to the report, the majority of MSPs on the committee concur that, despite their “sincerely held” nature, these opinions, “including the option to exclude trans persons from single-sex services when proportional and appropriate,” would not be altered by the Bill.

“The majority is confident that the Bill will neither modify or eliminate women’s rights, make changes to how bathrooms and changing rooms work, redefine what it means to be a man or a woman, or change or increase trans people’s rights,” the committee report said.

When examining the measure, MSPs received a “broad variety of perspectives,” according to Mr. FitzPatrick.

It comes after the Equality and Human Rights Commission issued the UK and Scottish governments a list of issues with the idea, including access to services.

If the Equality Act is approved by Holyrood, the watchdog warned that “practical problems or uncertainty are likely to occur in cross-border scenarios.”

People who altered their gender in Scotland but in another region of the UK, according to the letter, would have issues with their “legal standing and rights.”

Regardless of whether the UK government acknowledged GRCs awarded in Scotland, officials would still face additional problems.

According to The Telegraph, it would be difficult for both services and employers to identify a person’s legal gender without resorting to “intrusive or insulting” procedures like requesting to see a birth certificate or GRC.

Before the bill is passed, the watchdog urged both governments to “work constructively together” to resolve the issues it raised.