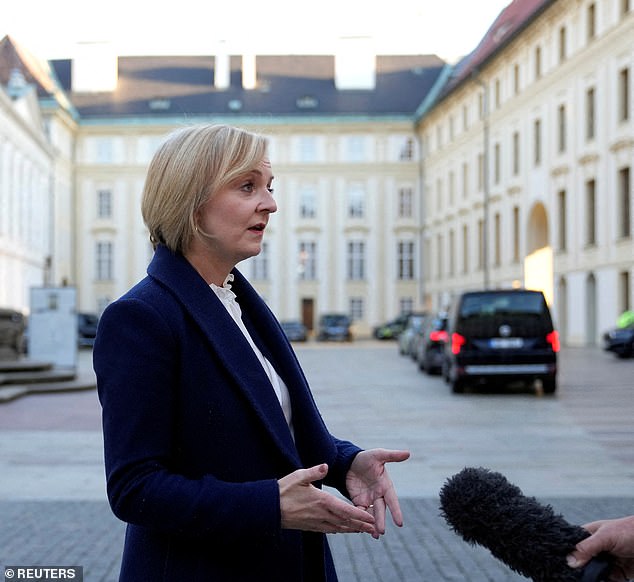 Today, Nicola Sturgeon hinted at a possible election alliance with Keir Starmer, making it obvious that she prefers him to be prime minister.

The SNP leader stated that it is ‘not difficult to respond’ whether Sir Keir or Liz Truss should be in No10, stating that she ‘detests’ the Conservatives.

After a close election, the Conservatives are reiterating their concern that Labour and the Scottish nationalists may form a coalition to gain power.

This morning, Ms. Sturgeon acknowledged that her push for a second independence referendum may be rejected by the UK Supreme Court this week.

When asked if a referendum will take place on her preferred date of October 23 of next year, Ms. Sturgeon responded emphatically, “I am convinced it can happen.”

The SNP is hosting its annual conference in Aberdeen, with activists pushing for actual progress on independence despite polls indicating that independence is not a priority for Scots and that a slim majority still supports the union.

Nicola Sturgeon said it is ‘not difficult to respond’ whether Keir Starmer or Liz Truss should occupy No10, stating that she ‘detests’ the Conservatives.

Conservatives have revived concerns that Sir Keir (seen in Wolverhampton last week) and the Scottish nationalists may form a coalition to win the next tight election.

Ms. Truss (seen last week in Prague) has been attempting to quell a wave of Tory infighting regarding tax rates and perks.

A poll conducted last week indicated that the Tories are likely to be wiped out in Scotland in the next general election.

Both sides framed the 2014 election as “once in a generation,” but Ms. Sturgeon says Brexit merits a rematch.

The chief legal officer of the Scottish Government is scheduled to argue before judges that it does not need Westminster’s consent to legislate for a referendum north of the border.

In the summer, the Lord Advocate sent potential independence referendum legislation to the court, asking justices to determine whether it falls within Holyrood’s jurisdiction.

The oral arguments will take place on Tuesday and Wednesday of the following week, although no date has been set for the court’s decision.

Ms. Sturgeon stated on BBC’s Sunday with Laura Kuenssberg, ‘There is little point in guessing on the outcome of a judicial hearing, but should that be yes, we have the legislative provisions ready to go.

Work is well underway to renew and update the substantive argument for independence; this will continue over the coming few days.

She continued by stating that she is “sure Scotland will achieve independence.”

When asked whether she would prefer Sir Keir to be prime minister over Ms. Truss, Ms. Sturgeon responded, “If the issue is whether I would prefer a Labour government over a Tory government, I abhor everything the Tories stand for.” Thus, it is not difficult to respond to this question. Yes.’

She stated that neither Labour nor the Conservatives were “sufficient” for Scotland.

Ms. Sturgeon pledged on Friday to continue her £20 million Scottish independence campaign despite the cost-of-living problem, while urging Scots to be “responsible about their energy usage.”

The First Minister stated that she possessed a democratic mandate to move on with her proposal to seek a new referendum on leaving the United Kingdom in October of next year.

During an appearance on BBC Breakfast, the SNP leader was asked if the money for preparing for a second referendum – for which approximately £20 million has been set aside – will be slashed in order to provide more assistance to those affected by the cost-of-living problem.

She stated, “We are discussing the current fiscal year, and I hope that the independence referendum will occur in the following fiscal year.”

Tories have warned of a possible coalition between Labour and the SNP after a close election, but the latest Opinium poll has Keir Starmer’s party with a 21-point advantage and a clear majority.

Minister of the Cabinet Nadhim Zahawi remarked that Ms. Sturgeon was obstructing nuclear projects north of the border.

“Therefore, even if we did, which we won’t because I was elected as prime minister on a platform of democratic…

I was elected to the Scottish Parliament last year with a record proportion of the vote on a record turnout. Therefore, we will fulfill our promise to the people.’

In a later interview on BBC Radio, she urged Scots to be “smart about their energy usage” this winter out of concern about power outages.

Earlier this year, the First Minister announced that the Scottish Government would publish a series of papers updating the prospectus for an independent Scotland.

As previously mentioned, Ms. Sturgeon has revealed that construction on a Scottish central bank will commence immediately after a Yes vote, with the newly independent nation retaining the pound for “some time.”

»Nicola Sturgeon hints she WOULD do an election deal with Labour«