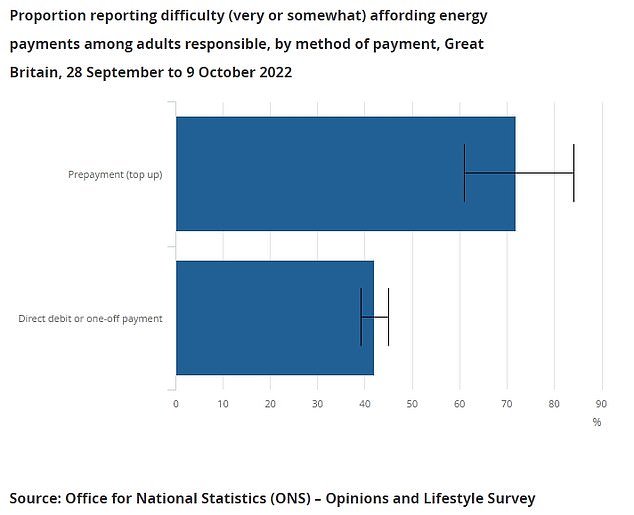 According to new official data, the cheapest grocery essentials have increased in price, with pasta and vegetable oils rising by nearly two-thirds.

The data also revealed that nearly half of Britons are having difficulty paying their energy bills.

According to the Office for National Statistics, the cheapest vegetable oil has increased in price by 65%, and the least costly pasta is now 60% more expensive than it was a year ago.

In the year leading up to September, the price of other supermarket essentials such as tea (46%), chips (39%), bread (38%) and biscuits (34%) also increased significantly.

The statistician also issued a fresh analysis of data from its near real-time Opinions and Lifestyle Survey along with these numbers.

This demonstrates that nearly half (45%) of adults had financial difficulties paying their utility bills at the start of October.

The National Statistician Sir Ian Diamond made the following comments in response to today’s data: “While the recent spike in inflation started with energy prices, today’s fresh insights using a new innovative data source show they are now filtering through to other important items, with the cheapest price of some staple food items rising by about two thirds in the last year.

According to data from our near real-time poll of the population, while increases in food and energy prices are having an impact on a wide range of Americans, those who are disabled, come from particular ethnic minorities, and are renters are among those who are having the most difficulty.

Our new, nearly real-time data, which reveals how prices are changing and sheds light on how various groups are affected, has never been more crucial given that cost of living increases are on many people’s minds.

One of Rishi Sunak’s top tasks as prime minister, who is expected to take office today, would be developing a strategy to assist households who are dealing with ballooning energy costs and rising inflation.

While Mr. Sunak’s tenure as Chancellor during the early stages of the Covid pandemic, together with his large Eat Out To Help Out gift, was unquestionably popular with the people, his attempts to force taxpayers to start covering the costs were unsurprisingly less successful.

He introduced the Spring Budget in March of this year, which included tax increases and did little to assist consumers who were struggling to pay for their homes’ heating.

The £40 billion black hole in the national finances will temper any action he currently takes.