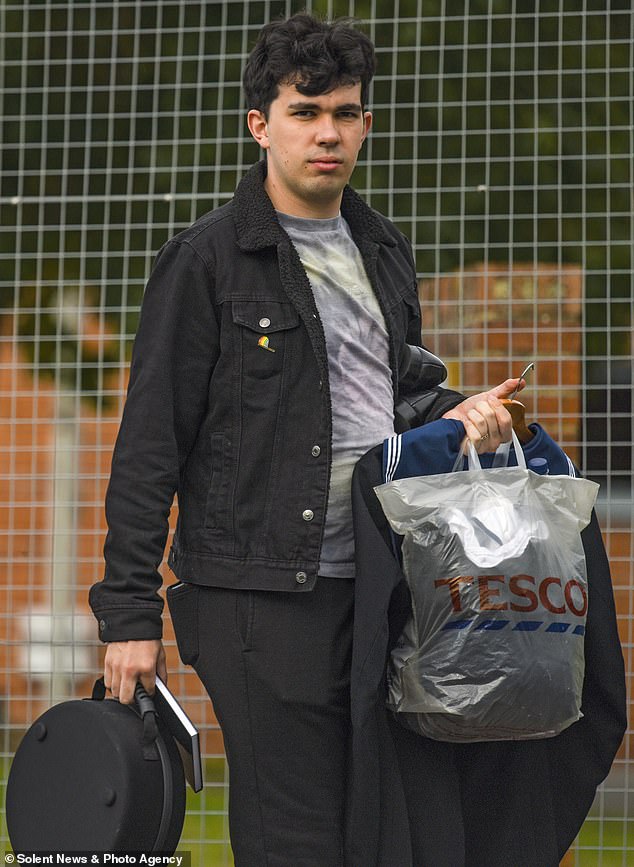 A Royal Navy engineer denied sexually assaulting a male coworker, telling a court martial that he could not have done so because he is ‘demisexual’

Able Sailor Triss Smythe is accused of ‘grinding’ on the alleged victim’s buttocks and kissing his neck, causing him to feel ‘violated and humiliated’

However, AB Smythe testified that he was innocent because, as a demisexual, he must first create a strong emotional attachment with someone before considering sexual interaction.

Indeed, he claimed he initially difficult to passionately kiss his female fiancée, “much alone a colleague.”

The 23-year-old argued that the manner in which he embraced and kissed a fellow sailor in an aircraft hangar was totally platonic.

Able Seaman Triss Smythe (right) has denied sexually assaulting a fellow sailor on the grounds that he is demisexual and so could not have done so. Demisexual refers to a person who does not experience sexual attraction until a strong emotional attachment has been established.

Additionally, he stated before the Bulford Military Court in Wiltshire that the colleague had kissed him in a similar manner a week prior to the incident.

AB Smythe, who was known to say “I’m here and I’m gay” in the workplace, denies one count of sexual assault by non-consensual touching and maintains that the kiss was merely a “peck.”

The court was previously informed that AB Smythe caused the claimed victim to feel “violated and humiliated” by placing his arms over his shoulders and “grinding” up against him before kissing him.

At the time, both men were wearing “paper thin” summer overalls, and the claimant testified that the kiss lasted “what seemed like an eternity.”

The military court heard that Air Engineering Technician AB Smythe “circled” behind his colleagues in a helicopter hangar at Royal Navy Air Station Yeovilton in Somerset.

However, AB Smythe testified that due to his demisexuality, the kiss could not have been of a sexual nature.

Demisexual is a term used to describe a person who does not experience sexual desire until a profound emotional connection has been created.

Regarding his sexuality, AB Smythe told the court, ‘I don’t shout it from the rooftops.

“I have always recognized how challenging [coming out] is. It is difficult; I had to do it myself.

I am demisexual and have emotional needs. It falls within the asexual spectrum.

When questioned about the likelihood that he was using his sexual orientation as a cover, he responded, “I do not use it as a cover.”

It’s a fact that I’m demisexual; sexual desire does not come naturally with my fiancée, let alone a colleague.

The court was informed that AB Smythe had been “out” as demisexual for “about two years.”

AB Smythe is on trial for sexual assault by non-consensual touching at Bulford Military Court (pictured) in Wiltshire.

It took him three months to develop sexual feelings for his now-fiancée, he said, adding, “I have nothing except professional and platonic feelings for [the alleged victim].”

The sailor told the court that the claimant had a’very personal’ talk with him the previous week.

He stated, “After the chat, he came up to me and gave me a meaningful hug with a great deal of emotion. It was vital that this hug occurred.”

He then placed a kiss on my cheek, similar to how you would kiss a close relative.

A passionate, emotional, and platonic kiss.

AB Smythe told the court that he, too, did not find the kiss sexual.

He stated, “I saw it as a close friend expressing what they couldn’t quite say in words.” I did not perceive a sexual subtext.

However, the claimant stated that the occurrence never occurred.

AB Smythe stated, in reference to the alleged sexual assault, “I walked beside the aircraft.”

AB Smythe (pictured), 23, argued that the kiss he offered his coworker was ‘platonic’ and merely a ‘peck’

“At this point, [the claimant] had obviously stopped working, so I decided it would be a good moment to say hello.

Because of [the previous week’s] events, I wanted him to know that the display of platonic affection was nothing to worry about and had not altered our friendship.

I approached him from behind, flung my arms over his shoulders, and pecked him on the cheek.

AB Smythe denied tightly grasping his colleague and said, “I gave him a short peck on the cheek.”

When asked if it was slobbery, he responded, “No, it was meant to be a split-second gesture.” No cause exists for me to lick him. He is not sexually attractive to me.

Regarding the claim that he rubbed his penis against the complainant’s bottom, AB Smythe stated, “My right hip would have been closest to his center line.”

He continued, ‘It couldn’t have been my penis through my overalls, personal clothing system (PCS), and boxers, and the same for him – it’s a stretch, in my opinion.’

The able seaman stated that the touch was “not at all sexual” and that he had “no motive to thrust into him,” adding that the kiss was “strictly platonic, a kiss between friends.”

AB Smythe responded, “I had the right to kiss him platonically in the same way he kissed me” when told he had no right to kiss a coworker in that manner in the workplace.