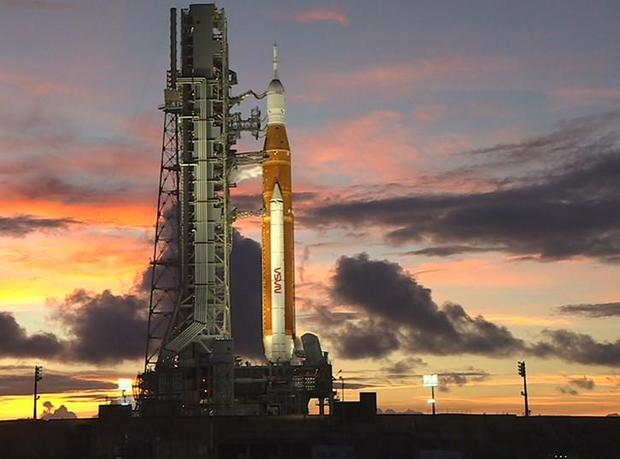 This mission was crucial in sending an unmanned Orion crew capsule on a 42-day voyage to the moon and back.

A two-hour window for launch, scheduled to begin at 8:33 a.m. EDT, was initially opened. If the problems are fixed by Friday, Sept. 2, at 12:48 p.m. EDT, the next launch opportunity will take place.

Then, while the fuelling was proceeding, a hydrogen leak was found. Finding the root of a brief communications hiccup in one of the channels carrying orders and information to and from the Orion spacecraft was another challenge as the countdown entered its closing hours.

One such probable concern was a potential sign of a leak of some kind, a thermal insulation fracture, or some other malfunction seen on the outside of the rocket’s core stage.

The massive core stage of the rocket must be filled with 537,000 gallons of hydrogen and 196,000 gallons of liquid oxygen using the meticulously planned fuelling technique.

When it occurs, the launch will be a spectacular sight. With four engines from the shuttle era and two extended strap-on solid fuel boosters, the SLS, NASA’s most powerful rocket to date, will provide an earth-shattering 8.8 million pounds of thrust to launch the 5.7 million-pound rocket from pad 39B at the Kennedy Space Center.

The Artemis 1 rocket element of the project will launch the Orion spacecraft and its European Space Agency-supplied Orion service module into space, out of Earth orbit, and onto a trajectory toward the moon in only one hour and 36 minutes.

Orion will quickly return to a far-off orbit around the moon after a close flyby at a height of just 60 miles for two weeks of testing and checkout.

If all goes according to plan, the capsule will fall back toward the moon for a second close flyby on October 3. This will trigger a swift return to Earth and a splashdown in the Pacific Ocean on October 10.

In 2024, NASA intends to deploy four people on a looping around-the-moon voyage as a follow-up to the Artemis 1 mission, laying the groundwork for the first human landing in over 50 years, somewhere around the south pole.

Future astronauts may be able to “mine” that ice if it is extant and accessible, turning it into oxygen, water, and even rocket fuel to significantly lower the cost of deep space travel.

It is thought that there may be ice deposits in lunar craters close to the pole.