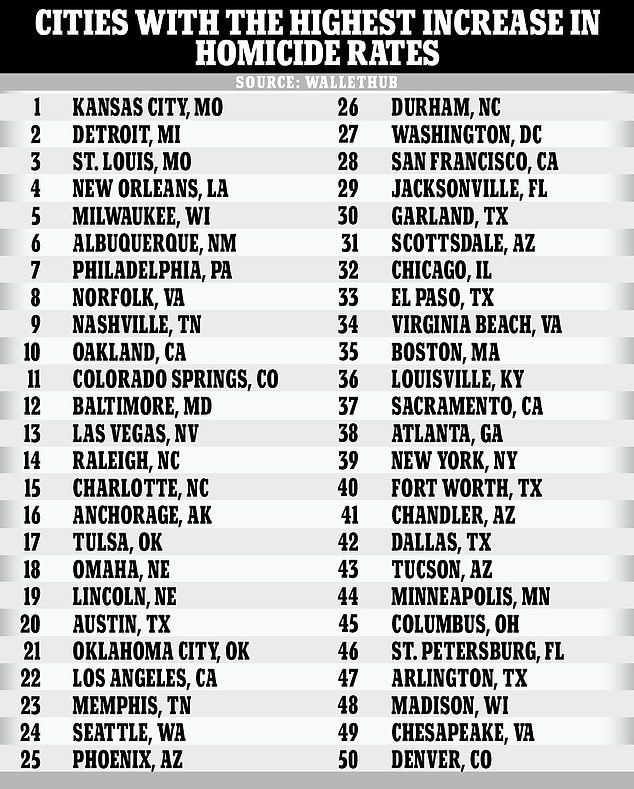 According to a research, the cities with the highest murder rates in America are Kansas City, Detroit, and St. Louis. The report attributes the overall increase in killings to soft-on-crime policies and attempts to defund the police.

In comparison to the same months in the previous two years, researchers discovered that Kansas City, Missouri, had the sharpest increase from July to September of this year, when there were 15 murders for every 100,000 residents.

This week, when two women were discovered dead in an apartment in the Santa Fe Hills area and another lady was discovered dead from gunshot wounds in her vehicle, the city’s crime issue was once again on display.

Detroit, Michigan, St. Louis, Missouri, New Orleans, Louisiana, and Milwaukee, Wisconsin round out the top five murder hotspots. Colorado’s Denver had the greatest performance out of the study’s 50 major cities.

A soft stance on crime and proposals to cut funding for police forces might damage Democrats in certain communities with high crime rates. Public safety and law and order are still major concerns for voters in November’s midterm elections.

Hotspots for murder in America DISCOVERED:

Professor of psychology Christopher Ferguson of Florida’s Stetson University said that the epidemic and unrest after George Floyd’s death in May of that year were responsible for the rise in crime beginning in 2020.

According to Ferguson, one of the experts mentioned in the analysis by the finance website WalletHub, “Widespread delegitimization of police from the political left… had an expected detrimental influence on policing.”

In contrast, residents in low-income districts were more afraid of the police and collaborated with them less. As a result, “police became more hesitant to participate in high crime areas.”

President Joe Biden called for “funding” the police when he launched his Safer America plan in July. His main demand was for about $13 billion to employ 100,000 police officers nationwide over the next five years.

Nevertheless, crime rates remain a concern for many voters, providing Republicans ammo to exploit in a blitz of television advertisements against “soft-on-crime” Democrats before the midterm elections, which will decide which party controls congress.

Researchers compared the murder rates from July to September in 50 major cities to the same times in the two prior years. They made use of local crime statistics as well as data from the US Census Bureau.

A city’s position in the league standings was decided by its total score.

Due to a decrease in murder rates over the previous two years, Denver, Colorado, received the highest score among the cities evaluated. Additionally well-ranked cities were Chesapeake, Virginia; Madison, Wisconsin; Arlington, Texas; and St. Petersburg, Florida.

Cities around the country were reporting larger rises in murders under Democratic mayors than under Republican mayors.

Low police morale and “bail reform” measures that release violent offenders back into the streets rather than prosecuting them were to blame, according to Tristin Kilgallon, a history and law professor at the University of Findlay in Ohio.

According to Kilgallon, “Police officer morale must be raised,” and officers must feel free to carry out their responsibilities without worrying about being singled out by the media and politicians for every perceived error, whether actual or imagined.

It is still unknown why crime and violence declined in the early 1990s and continued to decline far into the 2000s before beginning to rise once again, according to Michael Rocque, a sociology professor at Bates College in Maine.

Regression to the mean, according to Rocque, is responsible for some of the increase in killings.

We are aware that there has been a significant rise in gun sales in recent years and that the US murder rate is correlated with the availability of guns.

Researchers from WalletHub noted a 10% increase in murder rates in the 50 largest cities in the US and cautioned that the numbers are “continue climbing.” Other research, however, have produced different findings.

According to the Major Cities Chiefs Association, which represents several forces throughout North America, homicides decreased by 2.4 percent and rapes decreased by 5 percent in the first half of 2022, while total violent crime increased by 4.2 percent.

Data from important cities like New York and Los Angeles were lacking, but the FBI’s national crime monitoring system last month projected an anticipated 4.3 percent increase in murders in 2021 and a tiny 1 percent decline in total violent crime.

RANKED: The safest and riskiest cities in America

In a recent poll that looked at factors including the risk of wildfires and the percentage of drivers without insurance, Columbia, Maryland, was named the safest city in America and St. Louis, Missouri, the most hazardous.

Top of the list was Columbia, Maryland, a suburban community with around 100,000 residents that often receives high marks for quality of life, opportunities, and comparatively low crime rates. Columbia is located between Washington, DC, and Baltimore.