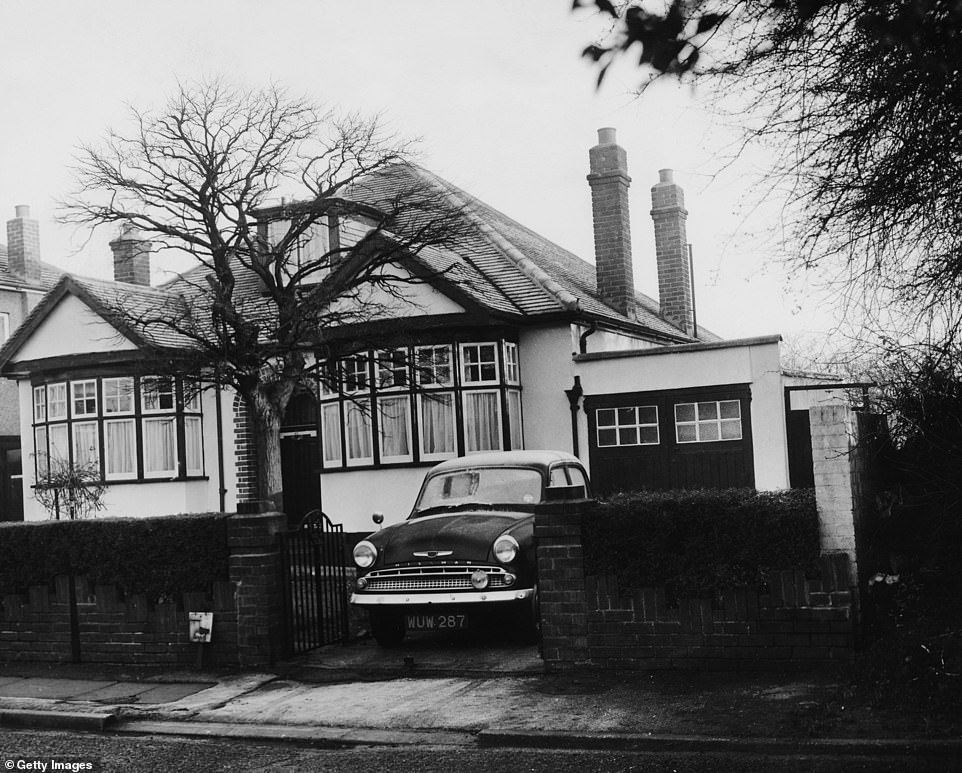 Peter and Lena Kroger, their next-door neighbors, knew Morris and Lena Cohen as reputable ancient book traders until they and their other conspirators were apprehended in 1961.

More information on the scope of the espionage operation that was being carried out at the Krogers’ house has now been made available thanks to recently leaked MI5 papers.

Unseen photographs reveal commonplace items with secret chambers, such as a talc container, American currency stashed away in obscure locations, and a hole in the kitchen floor that led to a radio transmitter.

The Navy’s top-secret Underwater Defence Establishment (UDE) at Portland, Dorset, was the source of the information sent to Moscow via that device.

The Cohens, along with the other important participants, were all found guilty of espionage and imprisoned after being apprehended by MI5 and the Special Branch of the Metropolitan Police.

The American pair took advantage of a spy exchange agreement with Russia, serving just eight years of their 20-year sentences.

When they were released from jail in 1969, they were welcomed back in Russia with open arms and were given prizes and feasts in their honor.

Despite receiving a 25-year sentence, Lonsdale, whose real name was Konon Molody, was exchanged back to the Soviet Union in 1964 so that he could be with his wife and children. He passed away six years later.

After ‘a lifetime of spinsterhood,’ Houghton and Gee, whose involvement in the conspiracy had been fueled by a romance between them, were released from jail in 1970 and eventually married. Gee always maintained that she did everything for him “out of love.”

The Cohens, who were US citizens and had served as KGB couriers who delivered atomic secrets, left the US in 1952 after other sleeper operatives were captured.

In order to continue their activity, they came in the UK in 1954 using fake passports obtained from New Zealand.

Houghton and Gee both resided close to the UDE. The first nuclear submarine built by HMS Dreadnought was being commissioned at the time.

Houghton had served at the Naval Attache’s office in Warsaw during the 1950s, but due to his severe drinking, he was sent back to Britain.

He was exposed by Polish intelligence in or around 1951, and then his case was given to the Russians.

Gee was a clerk at the UDE and had access to highly confidential, secret papers. She gave them to Houghton, who gave them to Lonsdale when the pair traveled to London on the weekends and pretended to be husband and wife.

Lonsdale led an opulent lifestyle, operating jukebox and bubblegum machine businesses and driving an imported Studebaker vehicle from the US.

They only learned he was really KGB agent Konon Molody after his eventual espionage conviction.

A “listening post” was erected across the street after it was learned that Lonsdale frequently visited the Cohens’ Ruislip residence.

Meetings between Houghton and Molody were also overheard by MI5 surveillance teams, who noted that the British man was “loud-mouthed.”

They were informed about monthly meetings held on the first Saturday, outings to see the Russian ballet in London, and gatherings held at the Cohens’ house.

After Michael Goleniewski, also known as “Sniper,” the CIA’s snitch in the Polish intelligence service, defected to the west in Berlin and provided information on Houghton, the CIA got involved in January 1961.

In response, MI5 mobilized Special Branch to apprehend the five, with Houghton, Gee, and Lonsdale being apprehended on Waterloo Road after exchanging paperwork.

When Gee was arrested, it was discovered that he was carrying Dreadnought-related information on film and photos in a shopping bag.

Officers arrived at the Krogers’ residence in the interim under the pretense of being local burglary investigators.

The recently made public MI5 files provided fresh insight into what they discovered.

One section, from an internal MI5 document titled the ‘Story of the Krogers’ describes how the house was a ‘veritable arsenal of espionage equipment.’

It continues, “It too took a week of diligent research to uncover all its mysteries.”

Along with the talcum powder box, other ‘innocent’ objects containing secret chambers were an Ever Ready battery, a Ronson Table Lighter, and a hip flask covered in pig hide.

The report said that “cameras, additional photography equipment, and a significant quantity of money added to the haul.”

Even a Bible in the bedroom had a piece of cellophane inside it that was covered in what was likely silver bromide film for microdots.

Secret documents known as microdots were written invisibly or were reduced in size to the size of a typewriter’s full stop after being photographed under a microscope.

Additionally, Thomas Wilson and Mary Smith-named passports from New Zealand and Canada were discovered to be in the possession of the Cohens.

The report stated that the “greatest prize was the high powered pre-calibrated wireless transceiver beamed to the Moscow area, together with a tape sender for high speed transmission” on the device discovered beneath the kitchen floor.

This was tucked away beneath some debris and was only accessible through a hidden trap door in the kitchen floor.

Following Mr. Cohen’s arrest, police prevented his wife from lighting the fire in the boiler after determining she was attempting to destroy evidence, in this instance the microdots holding classified information that the pair had also kept in a book.

The arrest’s exact moment is documented in the MI5 archives.

The arresting officer described how he responded to Mrs. Cohen’s request to ignite the boiler by saying: “Certainly, but first let me see what you have in that purse.”

She was holding the handbag against my will, so I opened the flap and took something out of a white envelope that later turned out to be a six-page letter written in Russian, a single sheet of paper with a block of typed numbers that I recognized as a message cypher, and a piece of glass that turned out to have three tiny microdots on it.

The house was particularly remarkable because of how many locks were used to safeguard it. A Yale lock, a Chubb mortice lock, a chain, and top and bottom bolts were all present on the front door.

The French windows were secured with four bolts and two additional locks, and the kitchen door had two locks and two bolts.

Throughout their espionage trial in March 1961, the Cohens and Gee adamantly maintained their innocence while Houghton’s attempts to flip on his coworkers were rebuffed and Molody remained mute.

Houghton and Gee received 15 years in prison in addition to the 20- and 25-year terms granted to the Cohens and Lonsdale.

Later, Lonsdale said that Houghton had distributed 350 brochures on anti-submarine gear, some of which dealt with the UK’s nuclear submarine fleet.

In return for Gerald Brooke, Michael Parsons, and Anthony Lorraine, the Cohens were traded to the UK. The last two individuals had received narcotics smuggling sentences from Soviet courts.

Harold Wilson’s Labour administration was criticized at the time for releasing spies who had harmed Britain.

Lonsdale was traded for Greville Wynne, a British businessman who had been imprisoned in Moscow for his ties with Soviet intelligence chief Oleg Penovsky.