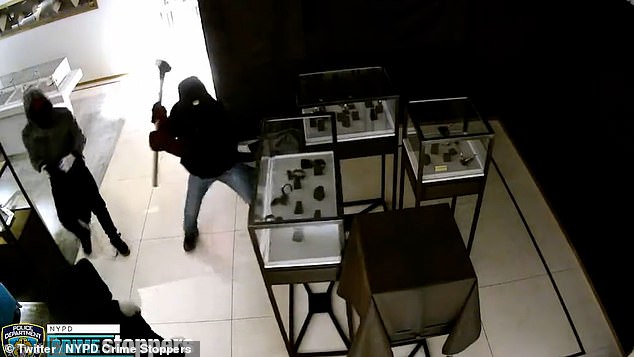 A stunning video captures the moment three robbers burst through the glass doors of a high-end jewelry shop in New York City and looted displays full of expensive watches and stones before driving off in a silver vehicle.

Three individuals are wanted by the New York Police Department for breaking into the exclusive Cellini jewelers on Park Avenue in Manhattan at approximately 3.30 am on Saturday.

Over $500k worth of pricey jewelry was stolen by the robbers.

The recent burglary is only one of several incidents that have contributed to the recent spike in crime in New York City.

The three burglars break shatter glass doors to enter the business at the start of the thrilling video.

The hooded group then smashes glass cabinets to the ground while frantically grabbing watches and jewelry.

They use a hammer to smash several of the glass cabinets so they may take the contents.

After that, they seize as many of the pricey stones as they can and stuff them into dark bags.

Finally, the group of three allegedly sped out of the business on East 56th Street in a silver vehicle, according to a New York Police Department spokeswoman.

The price of the opulent things on the website of Cellini Jeweler may reach hundreds of thousands of pounds.

The most costly item on the list is a historic diamond bracelet that sells for $865,000, but there are also diamond petal earrings that cost $12,000 and a Girard-Perregaux tourbillon watch that sells for $172,000 in the price range.

According to reports, the shop was still open for business on Saturday morning, and police are offering a reward of up to $3,500 for information regarding the thieves.

The crime rate in the Big Apple is still on the rise and is up 31.8% from the previous year.

Although the number of homicides recorded by police was down 14% from the previous year to 390, total crime increased by 31.8%.

Both robberies and assaults are up 35.5% and 15%, respectively. Numerous offenders have been granted early release without posting bail and received lesser terms.

Call the NYPD’s Crime Stoppers hotline at 1-800-577-TIPS if you have any information (8477). On Twitter, you may DM @NYPDTips with your tip or submit one via their website.