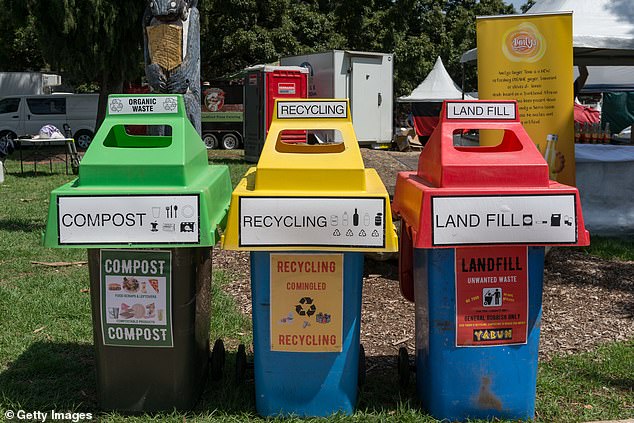 As part of a significant reform to the state’s recycling program, millions of Victorians will soon be required to divide their trash into four different containers.

The state will spend $515 million on the project, and by 2030, homeowners will be utilizing four bins, including a new purple one for just glass.

The dumpsters were deployed in seven locations in rural Victoria and the outlying suburbs of Melbourne in 2021, with ambitions to ultimately include every home.

The program, which has been hailed by authorities as the first recycling makeover of its sort in Australia, was tested on residents in those 13 municipalities.

Glass will be disposed of in the purple trash in addition to the red, yellow, and green bins.

The yellow bin is for soft plastics, wrappers, and dirty food containers; formerly, people had to transport these plastics to shops for recycling.

For organic garbage, use the green FOGO bin (Food Organics Garden Organics), whereas for regular household waste, use the red bin.

Victoria was the first state in Australia to undertake the significant recycling makeover, according to Lily D’Ambrosio, the environment minister for Victoria.

We are the first state in Australia to provide the identical bins to every residence and the first to accept soft plastics and pizza boxes in those bins, the official added.

The Circular Economy (Waste Reduction and Recycling) Bill, according to Ms. D’Ambrosio last year, will clarify the recycling industry in Victoria.

According to Ms. D’Amboriso, the new system will save the landfilling of 650,000 tonnes of organic waste, grow Victoria’s economy by up to $6.7 billion by 2030, and provide up to 4000 employment.

The southern suburb of Melbourne’s Frankston is next to join the container deposit program and will get the new purple bins in 2023.

Different strategies are used by the states and territory of Australia to distribute trash cans.

A regular rubbish can (red lid), a recycling bin (yellow lid), and a garden vegetation bin are often provided to residences in NSW (green lid).

In some homes with residents who live in the Inner West and City of Sydney council areas, there may also be a maroon-lidded bin for food scraps.

Residents of Queensland are urged to separate their trash into three categories: general waste, recycling, and yard waste.

A three-bin system is used in South Australia; the red bin is for general rubbish, the yellow bin is for recyclables, and the green can is for things like food scraps, paper towels, tissues, and yard debris.

In addition to the traditional domestic garbage can with a lid that is either red, dark green, or black, and the traditional yellow-lid bin for recyclables, Tasmanians have successfully incorporated organic waste containers.

In the ACT, the majority of residences are equipped with a standard 240-liter yellow-lid recycling bin and a 140-liter red-lid rubbish bin. Residents who pay a one-time registration fee of $50 may apply for a green bin for organic trash.

There are typically three bin systems available to homeowners in WA. Residents are given a red container for regular rubbish and a yellow bin for recyclables under the two-bin system.

An extra green-lidded bin for plant debris is provided to inhabitants of the three-bin Garden Organics (GO) system. Locals have a three-bin FOGO (food organics, garden organics) system to pick from. The green bin’s ability to handle paper products and food wastes is the primary distinction.

The two-bin approach is used by the Top End. Residents may separate their trash into two bins: one with a red lid for general rubbish and one with a yellow top for recycling.