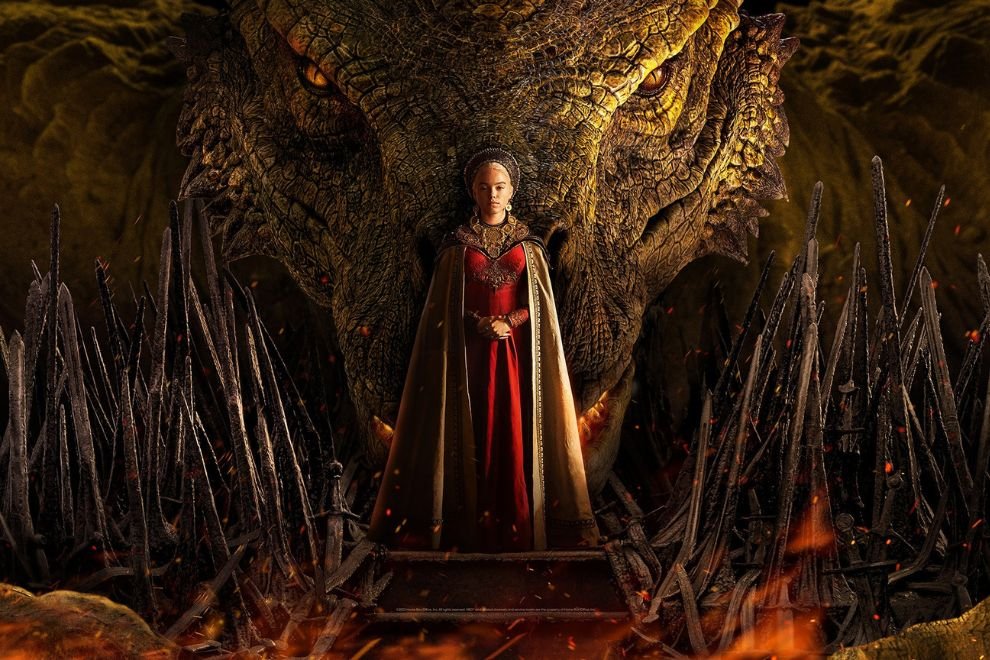 Her hair has become more intricately braided as Rhaenyra ages and gains confidence in her position as future queen. This maintains a tradition established by Daenerys in “Game of Thrones.”

A comparison of the hairstyles of Rhaenyra from “House of the Dragon” and Daenerys from “Game of Thrones.”

As Rhaenyra grows older in each episode, her hairstyles include increasingly intricate and organized braids. Just as it did with Dany in “Game of Thrones,” Rhaenyra’s braids appear to be evolving in tandem with the triumphs (both large and minor) she is securing for herself.

In this episode, Rhaenyra successfully shields her children from the truth about their ancestry, aids Laenor in escaping to Essos with his lover Qarl, and marries her uncle Daemon in a move that will strengthen their family’s defenses.

Vaemond, who appears to be a priest, declares that Laena is being transferred to “the endless waters, the Merlin King’s domain.”

In contrast to the Greyjoys of “Game of Thrones,” who worship the Drowned God in the Iron Islands, the inhabitants of the territories surrounding the Narrow Sea believe in the Merlin King.

In the novel “Fire and Blood” by George R.R. Martin, it is stated that the Velaryon’s Driftwood Throne (seen in the great hall of High Tide castle) was a “gift from the Merlin King.”

The Driftwood Throne is now occupied by Lord Corlys Velaryon, and in the line of succession it will pass to Lucerys, Rhaenyra’s second-born child, who is commonly referred to as “Luke.” In Sunday’s episode, Corlys mentioned the inheritance of this seat of power and all that comes with it while chatting privately with Luke.

This episode, which took place at the castle of High Tide, featured the largest gathering of dragons ever witnessed by viewers, with at least five dragons from the Targaryen and Velaryon families mingling together.

In this image, there are five dragons that may belong to Daemon (Caraxes), Rhaenyra (Syrax), Laenor (Sea Smoke), Rhaenys (Meleys), and Aegon (Sunfyre), and possibly Baela (Moondancer) or Helaena (Moondancer) (Dreamfyre).

Vhagar, the former queen of Visenya (the sister-wife of Aegon I, who aided in the conquest of Westeros), was claimed by Laena Velaryon between episodes five and six.

However, in the episode aired on Sunday night, we saw young Aemond Targaryen (the son of King Viserys and Queen Alicent) claim Vhagar as his own.

Helaena appears to be a rare dragon-dreamer, as she foretold that Aemond would lose an eye after capturing a dragon.

When we first encountered 11-year-old Helaena in episode six, she was playing with a collection of insects and speaking in cryptic phrases. As she listened to her brother Aemond discuss his wish for a dragon with Alicent, Helaena foretold what it would cost him.

In episode six, Helaena commented, “He will have to close an eye.”

Aemond was able to claim Vhagar before Laena’s daughter Baela, as seen in this episode. When Aemond was approached by Baela, Rhaena, Jace, and Luke, however, the young Targaryen prince intensified the conflict until Luke slashed his eye.

“I may have lost an eye, but I gained a dragon,” Aemond explained to Alicent at the conclusion of their conversation.

As the battle lines between Queen Alicent’s supporters and Princess Rhaenyra’s royal court continue to be drawn, Team Green has just acquired the might of the world’s oldest and largest dragon.

In “Fire and Blood,” it is stated that Laenor was murdered by Qarl. However, “House of the Dragon” surprised readers by revealing that he escaped thanks to a plan devised by Daemon and Rhaenyra.

Here is how “Fire and Blood” explained Laenor’s death:

“Ser Laenor Velaryon, husband of Princess Rhaenyra and presumed father of her children, was stabbed to death by his friend and companion Ser Qarl Correy while visiting a fair in Spicetown. Merchants at the fair reported Lord Velaryon, upon his arrival to retrieve his son’s body, that the two men had been arguing loudly prior to drawing their blades. Correy had escaped by that point, injuring numerous guys who attempted to stop him. Some said that a ship had been waiting offshore for him. He was never seen again.”

Even though “Fire and Blood” mentions that some people suspected Daemon was behind the attack, the murder is effectively remembered as a cold case.

By providing the television audience with a broader perspective of the events and allowing us to root for Laenor’s flight to Essos, we are more likely to support Rhaenyra. If Laenor and Qarl find refuge among Daemon’s ties in Pentos or elsewhere, Laenor will have the opportunity to live a happy life. He will not have to conceal his sexuality as much, and he will be relieved of the stress of ruling a kingdom on the verge of war.

The episode spends time leading you to believe that Rhaenyra conspired to have Laenor murdered for her own political objectives, a cold and cruel scheme consistent with other heinous deeds committed in “House of the Dragon” thus far.

In the final scene, though, we see Laenor and Qarl leaving Westeros at night in a boat. This development, coupled with Alicent’s public brutality and cruelty throughout the episode, demonstrates that “House of the Dragon” is creating the stage for Rhaenyra to become the series’ principal protagonist.

Sundays at 9 p.m. ET, new episodes of “House of the Dragon” air on HBO. Read on for a dissection of the best details from last week’s episode that you may have missed.

»5 facts you may have missed in ‘House of the Dragon’«